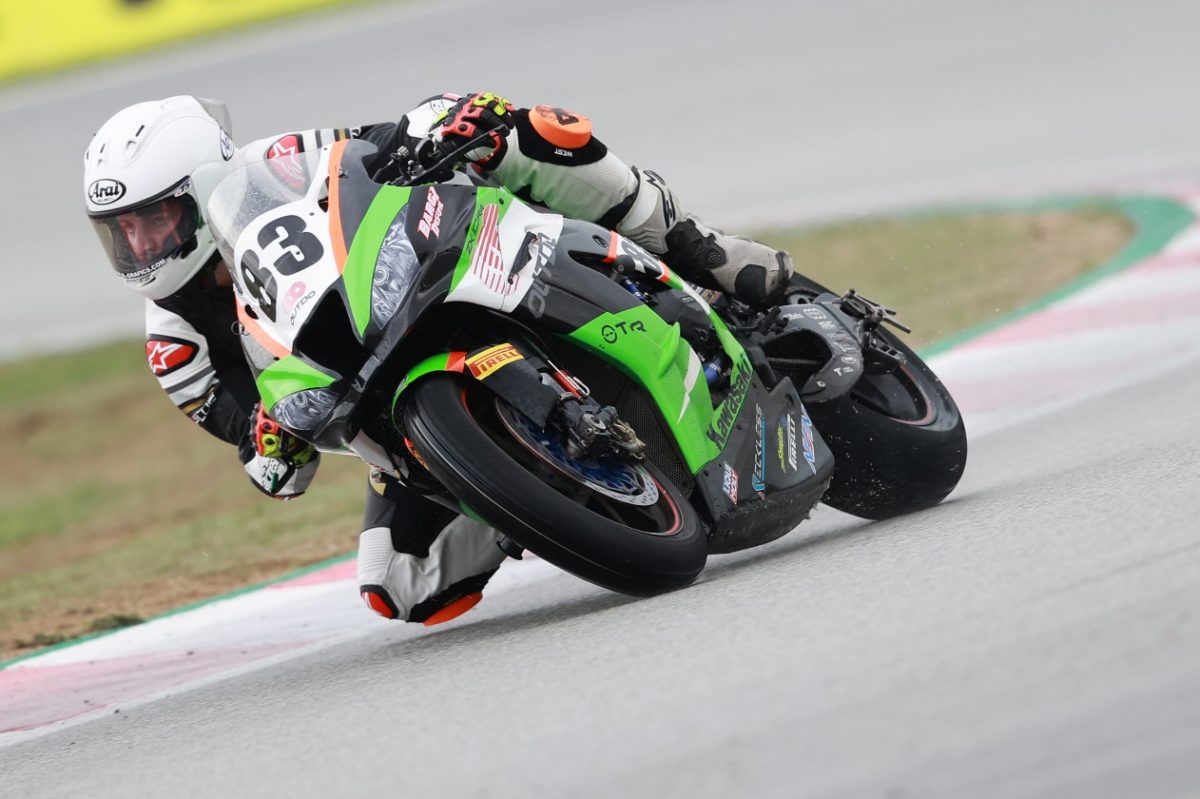 It was a dramatic debut weekend in the Superbike World Championship in Catalunya for Australian Lachlan Epis.

Riding for Team Pedercini Racing, the Sydneysider finished 18th in Race 1 and 20th in the Superpole Race, but was a DNF for an unusual reason in Race 2.

Epis was unable to avoid Alex Lowes at the original start of Race 2, making low-speed contact with the Kawasaki Racing Team rider himself as he slid towards the gravel trap at Turn 1/Turn 2.

Lowes had gone down in the pack and was ultimately diagnosed with a left wrist contusion (bruising) at the Circuit de Barcelona Catalunya’s medical centre, while a red flag for a separate, nastier crash gave Epis a second chance with the restart which ensued.

However, the 21-year-old had to pull into the pits after just a few laps due to an ill-fitting set of leathers borrowed from team-mate Loris Cresson.

“Firstly, I want to say sorry to Alex,” said Epis.

“By the time Jonas [Folger] had decided which way he was going it was too late for me to avoid him at the start of Race 2.

“Aside from that it was a challenging weekend. I hadn’t been on a bike since June in Australia and there was a lot to learn. 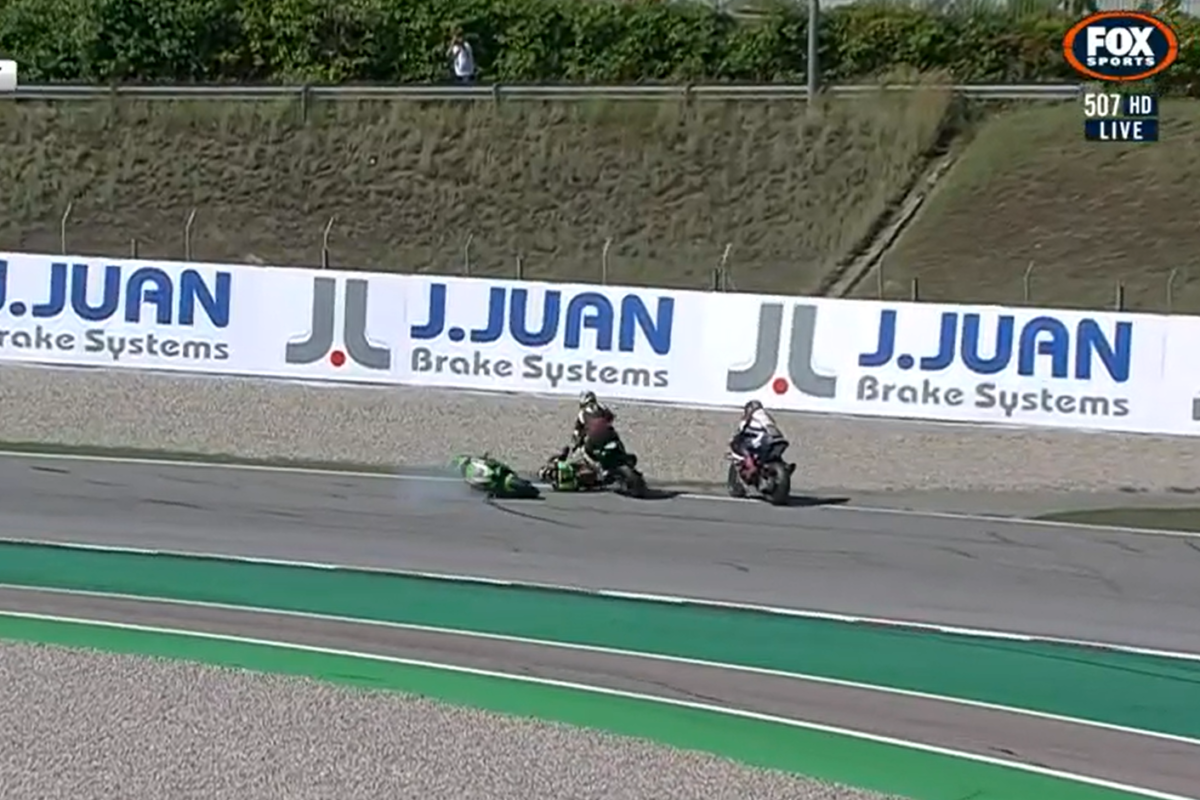 “Race 1 was wet, and it was my first time riding the Kawasaki in these conditions. I didn’t have the confidence to push as I wanted to, but we brought it home in one piece which was the target.

“I didn’t feel so bad in the Superpole Race, and I am happy with the step we made.

“I tried to make the restart in Race 2 after the initial incident, but I had to wear a set of Loris’s leathers which was also a bit strange.

“He is a lot smaller than me, and it was ultimately just too difficult to ride in his suit.

“Overall, I am pleased with the weekend and looking forward to riding again on Friday in Jerez.”

The red flag came after a Lap 2 coming-together between Tom Sykes and Lucas Mahias.

Sykes was conscious but diagnosed with a head injury and concussion at the medical centre before the BMW rider was transferred to hospital for further precautionary checks.

As far as the championship battle is concerned, Yamaha’s Toprak Razgatlioglu leads by just a single point after a DNF due to a Race 1 electronics issue and two second placings.

Kawasaki’s Jonathan Rea is next on the table, while the other two wins at Catalunya went to factory Ducati riders Michael Ruben Rinaldi and Scott Redding. 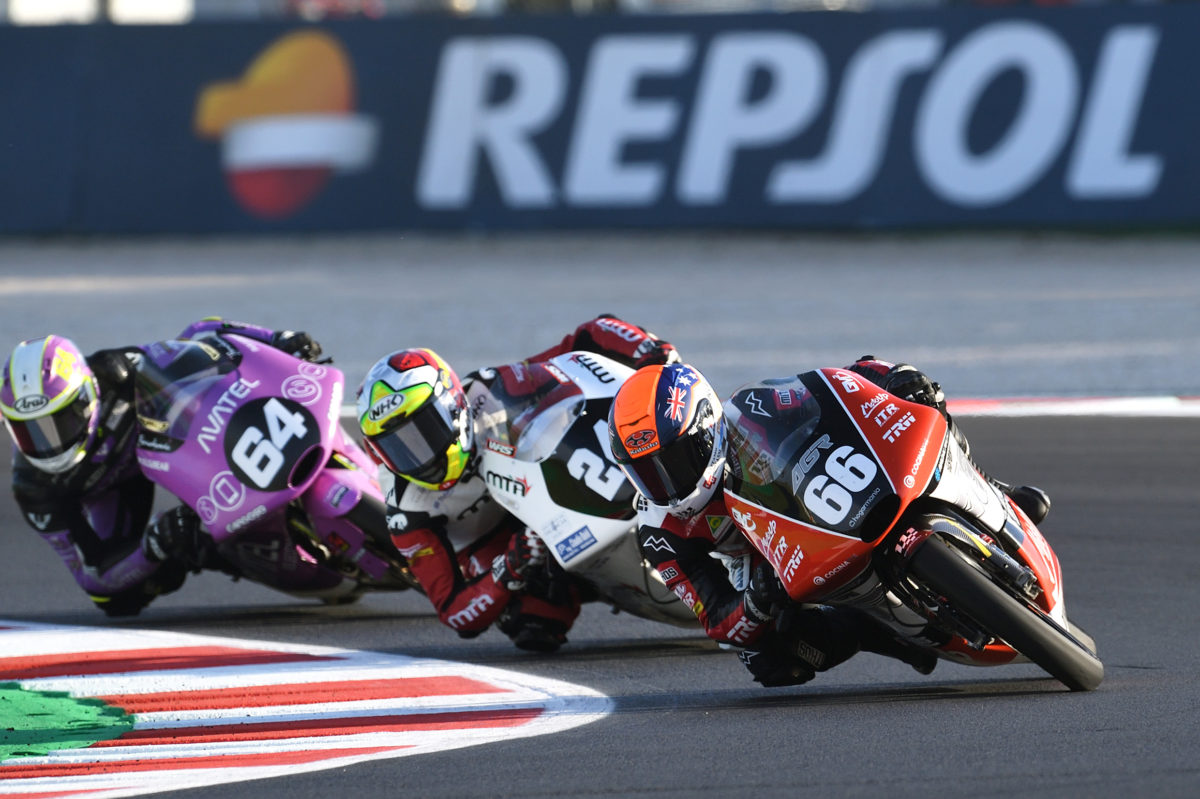 Joel Kelso’s first start in the FIM Junior Moto3 World Championship since the announcement of his rise to the grand prix arena next year yielded his second win of 2021, in exhilarating fashion.

Kelso (AGR Team) led much of the 10th race of the season, on the MotoGP undercard at Misano, despite contact with David Muñoz on the run to the very first corner.

However, the Territorian gave up the spot through a mistake with three laps to go, got back in front, then ran wide at Turn 10 on the final lap.

Ivan Ortola went through but when he was defensive at Turn 12, Kelso rode his KTM around the outside of the Spaniard and went on to prevail by three tenths of a second.

Daniel Holgado leads the championship despite crashing late in the piece while riding in what had been a leading bunch of four, while Kelso is now fourth in the standings.

The final two races of the season take place at Valencia on the weekend of Sunday, November 21.

In the Moto3 world championship, Dennis Foggia moved to second in the standings with victory at Misano after pole-sitter Romano Fenati crashed while leading.

Yuki Kunii started the warm up but not the race after his disqualification was upheld on appeal.

Kunii had been found to have caused a crash by riding slowly in Free Practice 3, when he was shunted at the high-speed Curvone by Alberto Surra.

MotoGP’s next round is at the Circuit of The Americas on October 1-3 (local time).