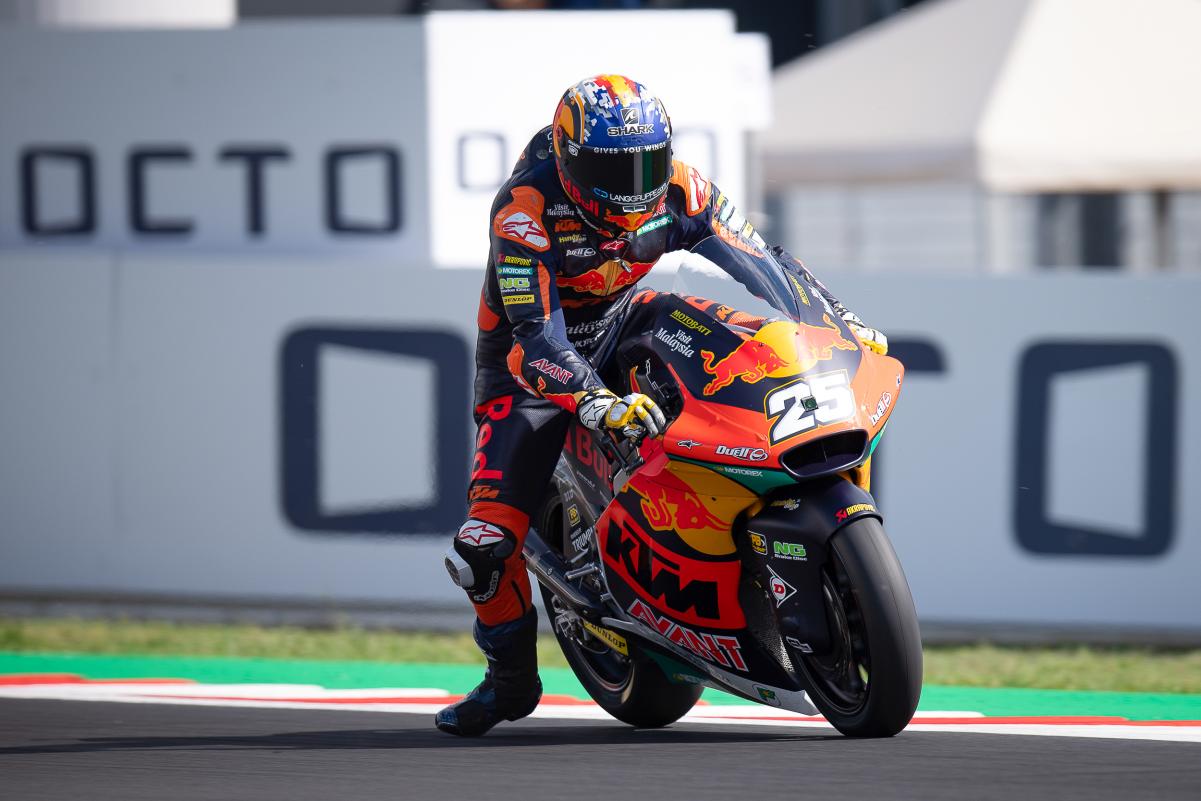 The Australian survived the big moment through Curvone, the fastest corner of the Misano World Circuit Marco Simoncelli, and took the chequered flag 0.402s behind Raul Fernandez after 25 laps in a second straight Red Bull KTM Ajo one-two.

The result means that Gardner leads the championship by 34 points over his team-mate with four rounds to go and thus 100 points still on offer.

For Raul Fernandez, it is a perfect 50 points in the two races since he broke his right hand in a cycling accident, and the Spanish rookie was clearly feeling the effects in pit lane afterwards.

He had taken the initial lead from pole position, but handed it to Sam Lowes (Elf Marc VDS) when he ran wide at Turn 8 and could not make the attempt to reclaim the position at Turn 9 stick.

Trailing them at the end of the standing lap was Aron Canet (Inde Aspar), from Marco Bezzecchi (Sky VR46), Xavi Vierge (Petronas Sprinta), and Gardner, the latter of whom had been third until he was held wide at Turn 4 and lost three spots.

Vierge scythed past Bezzecchi at Turn 2 on Lap 2, before Gardner also overtook the Italian, at his second attempt, at Turn 9 on Lap 3.

Canet moved into second position when he went by Raul Fernandez at Turn 14 on Lap 4, before Gardner passed Vierge for fourth at Turn 4 on Lap 6.

Canet needed little time to catch up to Lowes and gladly accepted the invitation to snatch the lead when the Briton ran wide at Turn 14 on Lap 8.

Raul Fernandez relegated Lowes to third at the start of the following lap, and the Marc VDS rider would then begin to come under threat from the other KTM Ajo entry, still running fourth in the hands of Gardner.

Bezzecchi passed Vierge for fifth at Turn 14 on Lap 12, by which time Gardner was more than a second up the road, at the back of a top four which was tightening up again.

The leading quartet continued to gap Bezzecchi and there was change at the very front when Raul Fernandez went up the inside of Canet at Turn 1 on Lap 15.

Two laps later, Gardner was finally back into the podium positions when he nipped past Lowes at the switchback into Turn 2, a move he needed to make in order to have a chance of keeping in touch with #25 and #44.

As if to respond, Raul Fernandez reset the fastest lap on both Laps 18 and 19, and continued to gap Canet in the following laps.

Gardner prised second spot from Canet through Turn 2/Turn 3 on the penultimate lap, despite the Spaniard’s best efforts to hold him off.

The Australian was almost a full second back from Raul Fernandez at that point, but pared the deficit back to 0.650s with a lap to go, and was 0.310s next time they tripped Sector 2.

However, Gardner was just about out of the saddle through Curvone and, once he gathered up Bike #87, had to switch focus to holding off Canet.

In the end, the top three was indeed Raul Fernandez, Gardner, and Canet, with Sam Lowes a second further back in fourth.

Bezzecchi finished fifth and Augusto Fernandez (Elf Marc VDS) ended up sixth having got away slowly from the front row.

Despite the grey clouds hanging overhead, and evidence suggesting very isolated spots of rain, the race essentially ran in dry conditions throughout.

Round 15 is the Grand Prix of the Americas, at the Circuit of The Americas, on October 1-3 (local time).