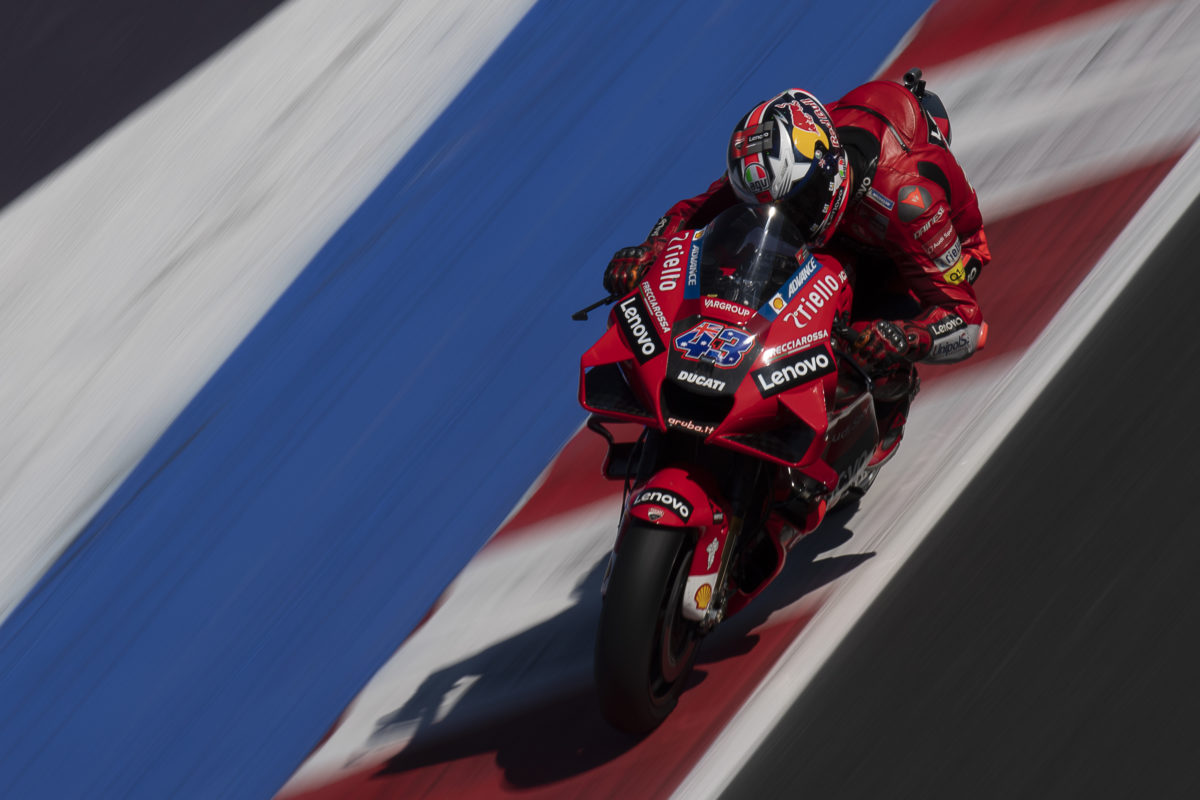 Miller qualified second only to Ducati Lenovo team-mate Francesco Bagnaia, who secured pole with an all time lap record, for the 27-lapper around the Misano World Circuit Marco Simoncelli.

Qualifying was held in dry conditions although rain started falling almost as soon as it was over, following a rain-affected Free Practice 1 and fully wet Free Practice 2 on the day prior.

While Miller has been competitive in both wet and dry weather so far this weekend, he tends to profit in the former, and is not averse to the possibility of more showers on Sunday afternoon (local time) on Italy’s Adriatic Coast.

“[I was] Feeling good in both conditions from the get-go, to be honest, so I’m relatively confident going into [Sunday],” said the Queenslander.

“Still a bit of a question mark, having the wet sessions; you don’t get as many laps to understand the tyre and how it’s going to work and what’s going to be the best combination.

“Some of the boys were really strong with the medium this afternoon [Free Practice 4]; we opted for the used soft and it was good but we need to study that a little bit more.

“But yeah, if it rains, I won’t be frowning, that’s for certain.

“But no, I’m excited. I’ve always qualified well here; through one way or another, I’ve never really finished that great here, so it definitely would be fantastic to put that to bed tomorrow.”

Miller was the victim of a bizarre incident last time MotoGP raced at Misano, when he led very briefly but retired before the halfway mark after his Pramac-entered Ducati ingested one of Fabio Quartararo’s discarded tear-offs.

However, he also admitted to previously struggling at Turn 11, known as Curvone, the fast right-hand sweeper which marks the end of the back straight.

‘Jackass’ said the 2021 Desmosedici is a “massive difference” in handling at Misano compared to its predecessors, especially in the first sector, and that studying Bagnaia’s riding has also helped. 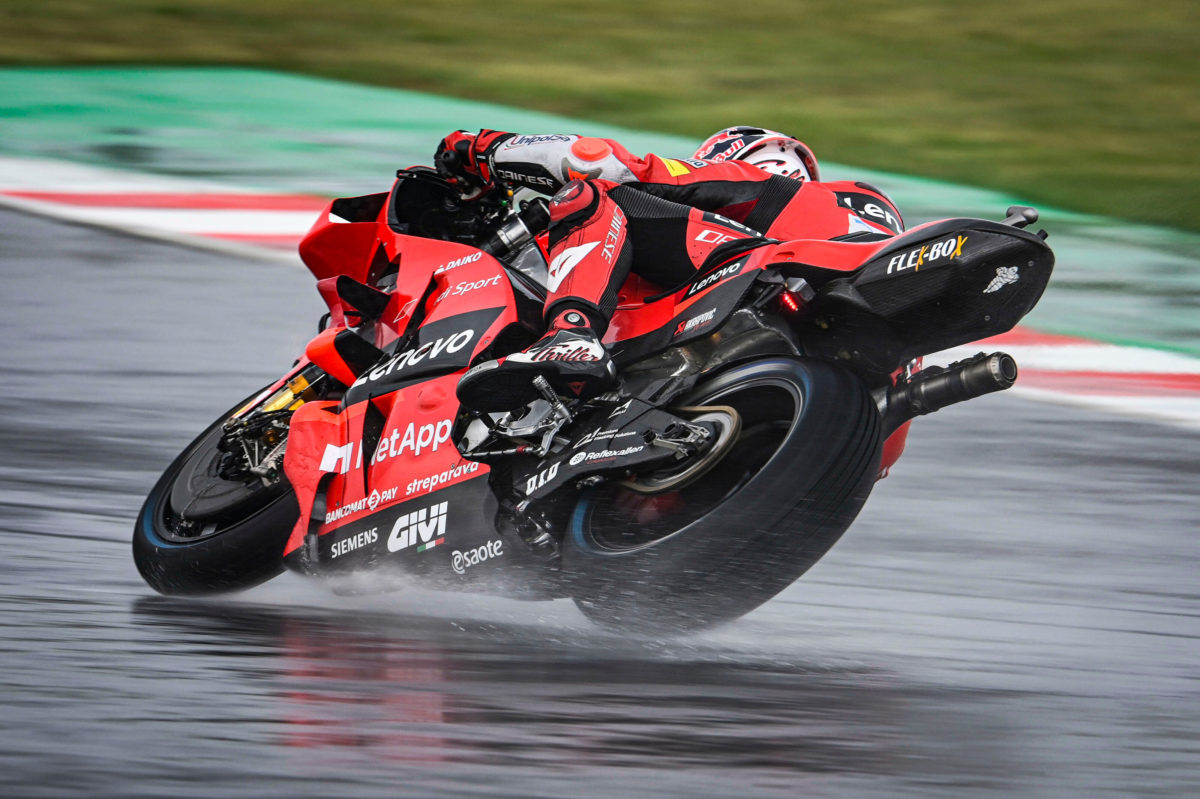 Miller in a wet practice session

“[Curvone] is a corner which I’ve hated, my whole career, pretty much, and it’s not too bad this year,” he noted.

“It seems to go in there pretty well, I haven’t touched the green [painted run-off] too many times, so that’s always a positive – I’m not getting a long lap [penalty] tomorrow, hopefully – and it’s working really well.

On looking at Bagnaia’s laps prior to this weekend, he added, “I think all my studying’s definitely paying off because last year I think he was going through there something like 15km/h faster than me.

“But this year, I’ve been able to bring it down to about five or six, so it’s not too bad.

“But, that’s his specialty. I think it’s more to do with how he hangs out of the bike, with his shoulders a lot more.

“He’s able to basically use his body as a sail, and me, I go a little bit more old school with my arse out, so it doesn’t really work ideally for these kind of corners.”

The man on #43 is currently fifth in the championship, while Bagnaia trails Quartararo, the other front row qualifier, by 53 points at the top of the table.

Miller stated before the round started that he would be willing to help his team-mate run down the Yamaha pilot in the championship contest, although he says now that he will be taking a wait-and-see approach to the San Marino race.

“I mean, it’s always a Jack race in my mind, but we will see how the race unfolds,” he explained.

“For sure, Pecco, I think, on paper and let’s say history, is probably the strongest one on the grid, so if he wants to check out, I’m quite happy to sit in his wake and play blocker as much as I can.

“But, I think talking about that kind of thing now is pointless; we have to wait until the lights go out [on Sunday] and then once that happens, understand where you are, understand the race, how you’re feeling, how the bike’s reacting, and then go from there.”

All four contracted Ducati riders qualified inside the top five, with Jorge Martin fourth and Pramac Racing team-mate Johann Zarco, who is eight points ahead of Miller in the standings, to line up next to the Spanish rookie.