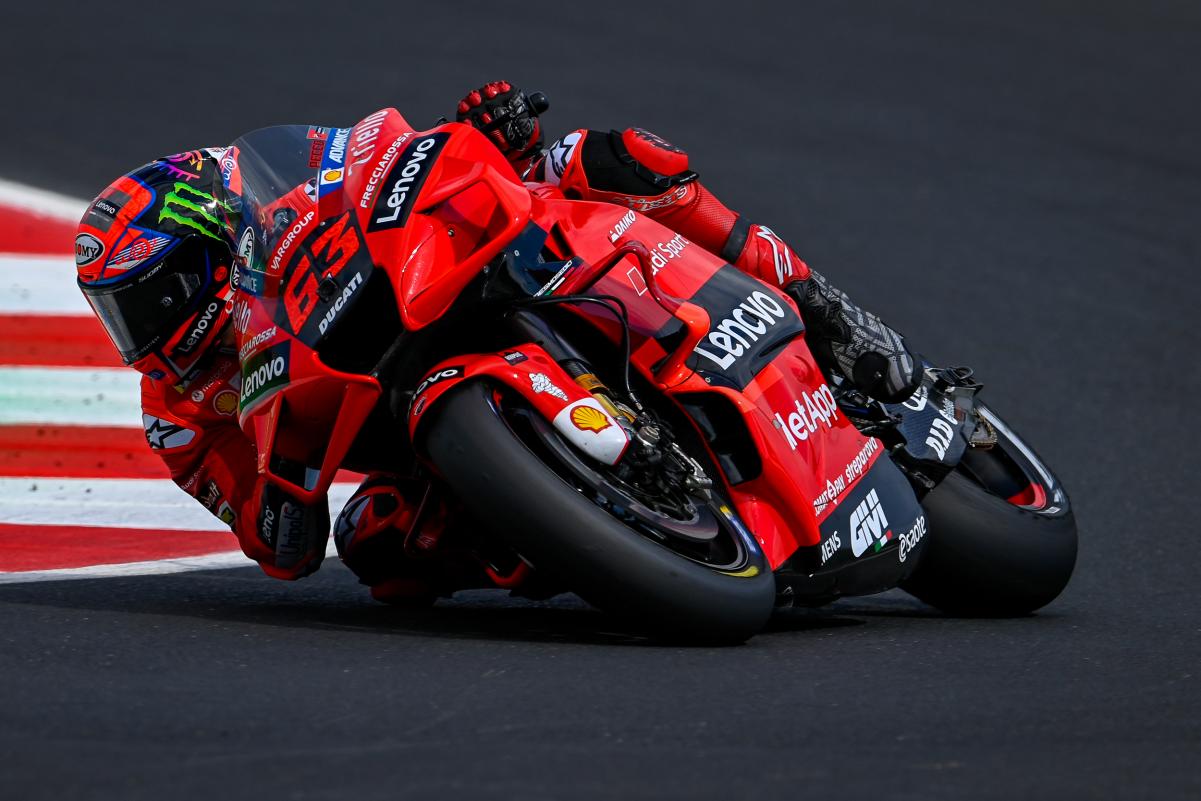 Bagnaia led all 27 laps around the Misano World Circuit Marco Simoncelli but that statistic hardly tells the story of what the Ducati Lenovo Team rider faced.

When Quartararo passed Jack Miller for second position almost exactly halfway into the contest, the gap was over 2.5s.

However, Bagnaia began to seriously struggle with his soft compound rear tyre while Quartararo was still going strong with the medium on the back of his Monster Energy Yamaha.

They were nose-to-tail at the start of the final lap but the Italian made a big push onto the back straight and survived, taking his second career MotoGP race win just a week after his first, and snipping Quartararo’s championship lead to 48 points.

Enea Bastianini scored his first premier class podium on a 2019-model Ducati, Marc Marquez finished fourth, and Miller was classified fifth after Joan Mir was penalised for a track limits breach on the final lap.

Back at the start, Bagnaia led the field to the first corner from pole position while Quartararo claimed second spot under brakes, before Miller (Ducati Lenovo) wrested that position from him through Turn 3.

Jorge Martin (Pramac Ducati) had a dive at both Quartararo and Marc Marquez (Repsol Honda) at the start of Lap 2 and while he could not make the move on the former of those stick, he successfully nabbed fourth position from latter.

Martin did make it a Ducati one-two-three exactly a lap later when he got underneath Quartararo at Turn 1, triggering a big stoush between them.

They chopped and changed positions multiple times, costing Quartararo time relative to Miller, but the battle quickly ended when the Pramac rookie went down at Turn 14 on the same lap.

Meanwhile, Bagnaia had been a full second to the good after Lap 1 and stretched his advantage to around 1.5s before Miller started to turn the tide.

The gap was back to approximately 1.2s when Miller ran well wide through Turn 13 on Lap 8, and Quartararo ran into the green paint just behind him.

That mishap caused the margin to roughly double and Miller was not recovering any of it anytime soon.

Quartararo, on the other hand, was closing up to #43, and the Frenchman nabbed second spot through Turn 6 on Lap 14.

Bagnaia was 2.8s up on #20 once they tripped the next sector, but Quartararo started to chip away at the last-start winner also.

By then, another Ducati was running in fourth, but that was the Avintia Esponsorama Racing entry of rookie Bastianini.

The Italian had cut a swathe from 12th on the grid, impressively overtaking Aleix Espargaro (Gresini Aprilia) for fifth into Curvone on Lap 5 and then passing Marc Marquez at Turn 8 on Lap 6.

At one point, he was 3.5s behind the then third-placed Quartararo, but closed to only two seconds away from Miller when he set a new fastest lap on Lap 16.

It was 1.5s when he did likewise on Lap 17, and around half a second when Bastianini reset the fastest lap for the third time in a row on Lap 18.

Miller received a track limits warning shortly before Bastianini came from deep to snatch third position from the Australian at Turn 13 on Lap 19.

Just up the road, Quartararo was eating into the advantage enjoyed by Bagnaia.

The championship leader was within two seconds on Lap 19, and the margin was 1.3s at the end of Lap 20, before Bagnaia moved it back to about 1.5s on Lap 21.

Nevertheless, the trend was in favour of the Yamaha man, who was less than 0.7s away from the lead with four laps to go and still closing.

He had caught the #63 Ducati by the end of the third-last lap, and the official margin with a lap to go was just 0.135s.

However, Bagnaia saw to it that Quartararo was not close enough to make a dive with a good run off Turn 10, and went on to win by 0.364s.

Bastianini took the chequered flag another four seconds further back, while the first position off the podium was decided in a three-way fight on the final lap.

A struggling Miller had been run down by Marc Marquez already but remained in the fight for fourth and those two, plus Mir, went into Turn 14 together on the final lap.

Marc Marquez emerged at the front of that battle with Mir second, but the Suzuki Ecstar rider touched the green paint exiting Turn 15 and thus incurred the automatic position drop penalty for doing so on the final lap.

Pol Espargaro (Repsol Honda) finished seventh, ahead of Aleix Espargaro, and Brad Binder from all the way back in 17th on the grid on his Red Bull KTM.

Takaaki Nakagami (Idemitsu LCR Honda) rounded out the top 10, ahead of Ducati Lenovo wildcard Michele Pirro and Johann Zarco (Pramac Ducati), the latter of whom had started fifth.

Suzuki Ecstar’s Alex Rins was fifth when he crashed out at the start of Lap 18, Iker Lecuona (Tech3 KTM) was just inside the points when he went down at Turn 4 on Lap 15, and Martin remounted following his own spill but was ultimately a DNF also.

Despite forecasts of rain, and the grey clouds above, the race ran dry throughout.

Round 15 is the Grand Prix of the Americas, at the Circuit of The Americas, on October 1-3 (local time).