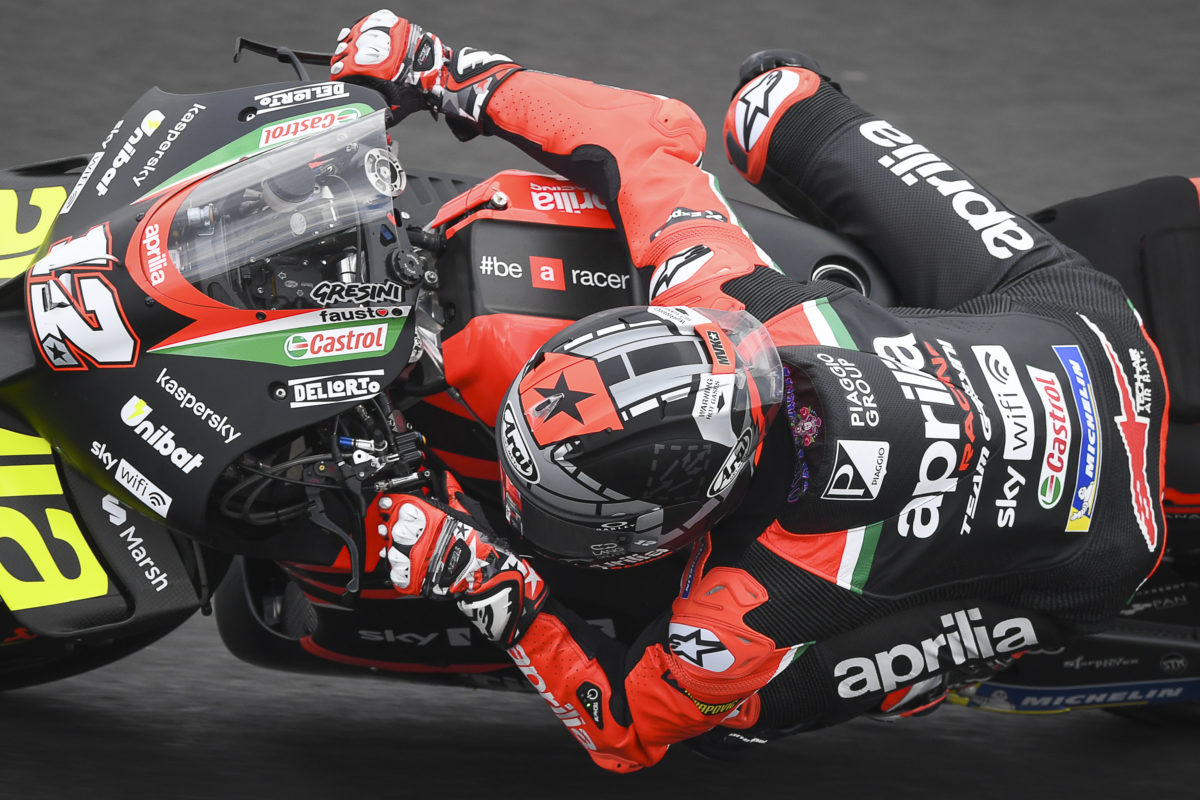 Maverick Viñales says a recent test at Misano meant he did not feel “like a rookie” as he topped Friday MotoGP practice in his second start on an Aprilia.

Last weekend’s Aragon Grand Prix was the now ex-Yamaha rider’s first round with Aprilia Racing Team Gresini, and he finished 18th from 19th on the grid.

On the opening day of the San Marino Grand Prix weekend, Viñales set the pace with a 1:32.666s around the Misano World Circuit Marco Simoncelli in Free Practice 1.

While rain began to fall with around 15 minutes of the opening session to go, and for the duration of the second, 45-minute hit-out, the Spaniard had been genuinely competitive in the dry.

Misano is where he got his first laps on the RS-GP in a two-day test at the turn of the month, which played a part in practice for the grand prix.

However, Viñales noted that there is still significant improvement in him as an Aprilia rider.

“When I was in Alcañiz [MotorLand Aragon], the first laps I was feeling like a rookie that never rode a MotoGP bike,” he quipped.

“Because, it’s too different; I need to use very different lines [on the Aprilia compared to the Yamaha].

“In Misano, it seems that this is much easier, because I already understand how to go with this bike in this track. I can anticipate a few moves; I can correct a few things.

“This is all about feeling, confidence, understanding the bike and the track.

“But still there is a lot of room to improve. This is very positive, because I felt OK, today was a good day, I didn’t feel on the limit, and still I keep learning, so it’s very positive.”

Team-mate Aleix Espargaro was sixth-fastest in FP1 and eighth in Free Practice 2, while Viñales wound up 17th in the latter session.

However, the new Aprilia rider said the wet running was the “most important” part of his day.

“The most important thing today is that I tried the bike in the wet,” noted Viñales.

“It feels like we have a really good potential.

“It was really nice because I had good feedback from the bike in the wet, and this means a lot, it means so much.”

Overall, Viñales says that the showing left him “more calm”, given the potential which is apparent.

“Like in Alcañiz, we are not thinking at all about the position and the performance,” he explained.

“We know we have to be focused on the feelings, especially on this learning process that we are doing.

“It’s good to be in the front, this is clear, it makes you feel much more calm, much more comfortable, because you feel you have the speed.

“But we need to keep a lot of calmness, trying to build up a solid step and this is what we are trying to do.”

Viñales is not the only relative newcomer this weekend at Misano.

Franco Morbidelli, now at the factory Monster Energy Yamaha team, was 16th-fastest in the dry and 13th in the wet on his return from injury.

Andrea Dovizioso, whose ‘sabbatical’ has ended now that he has taken over Morbidelli’s seat at Petronas Yamaha SRT, was 24th in FP1 and 21st in FP2 on the ‘A-Spec’ YZR-M1.