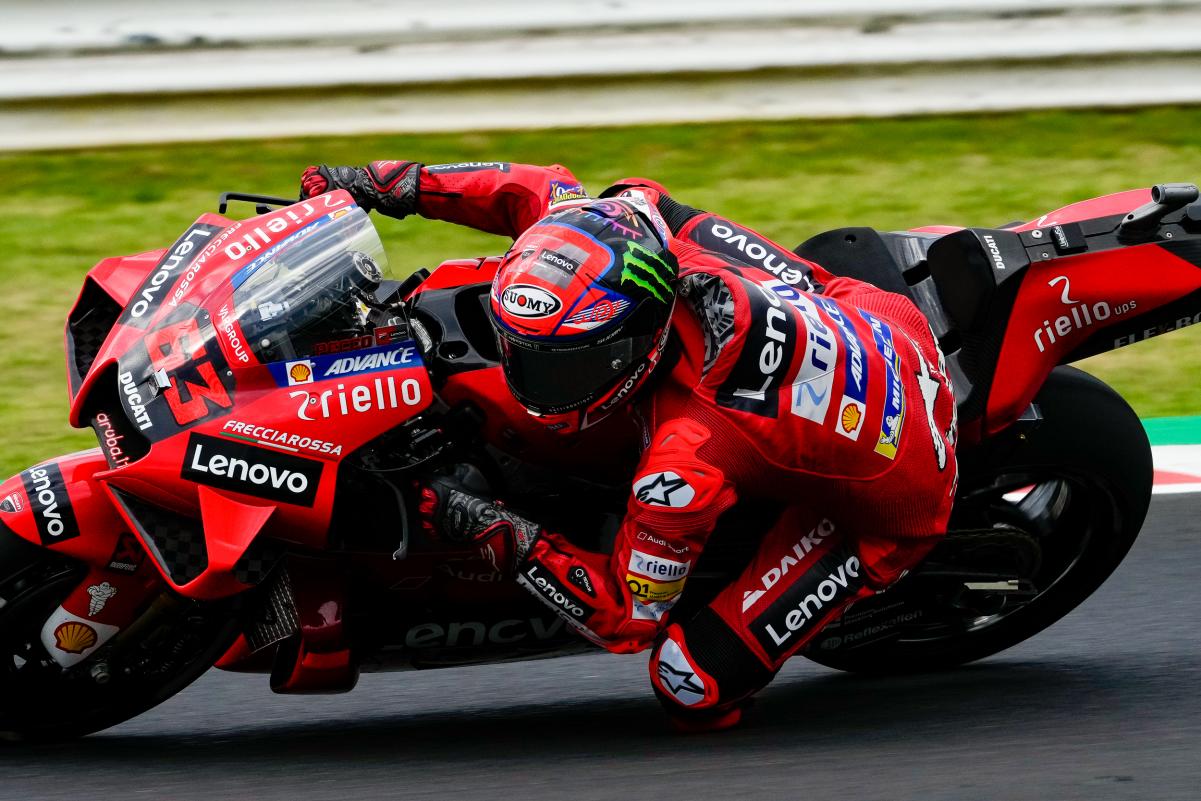 Francesco Bagnaia has qualified on pole for the San Marino MotoGP round while Jack Miller made it a second straight Ducati Lenovo Team one-two on the grid.

Fabio Quartararo crashed his Monster Energy Yamaha at Turn 1 of the Misano World Circuit Marco Simoncelli on his final lap but would not be unseated from the other front row berth.

The championship leader was hardly alone in hitting the deck, with Marc Marquez dropping his Repsol Honda in Qualifying 2 and Enea Bastianini falling on his in lap at the end of the Qualifying 1 session in which he set the pace.

Quartararo had been fastest after the opening flyers in Q2, clocking a 1:32.097s which had him more than seven tenths of his nearest rival at that point, namely Bagnaia.

Aleix Espargaro (Gresini Aprilia), Marc Marquez, Jorge Martin (Pramac Ducati), and Francesco Bagnaia (Ducati Lenovo) then all had brief spells on the top thanks to their second flyers, before Quartararo came through and set a 1:31.367s.

Bastianini (Avintia Esponsorama Ducati) had been sixth-fastest momentarily but was relegated to 12th when he had his fastest lap cancelled.

Marc Marquez had used Honda stablemate Stefan Bradl as a reference to help get himself out of Q1, after a late crash in Free Practice 3 consigned him to the first, 15-minute session qualifying session.

In Q2, he was trying to go with Bagnaia as he went for his second run but succeeded only in losing the front through Turn 9, and that was that for #93.

Aleix Espargaro then crashed on his out lap, before Bagnaia improved to a 1:31.485s and Martin to a 1:31.663s, which left them an unchanged second and third respectively.

Bagnaia, however, had more to come, following that effort up with a 1:31.065s that would not only yield a second straight pole, but also break the all time lap record at Misano.

Miller then came through to set a 1:31.314s and relegate Quartararo to third, which is where the Frenchman would stay after he folded the front of #20 at Turn 1 in the final minute of the session.

Ironically, the latter’s time bumped team-mate Marc Marquez onto Row 3, which he will share with Aleix Espargaro and Alex Rins (Suzuki Ecstar).

Maverick Viñales qualified 10th in just his second round for Aprilia Racing Team Gresini, Suzuki Ecstar’s Joan Mir ended up 11th after an apparent technical problem with his GSX-RR, and Bastianini took 12th.

Takaaki Nakagami was fastest of those who failed to get out of Q1, the Japanese rider dropping his Idemitsu LCR Honda in the final three minutes of that session when poised to go fastest.

Franco Morbidelli (Monster Energy Yamaha) is set to start 16th on his return from injury, Brad Binder (Red Bull KTM) from 17th after a crash during his second run, and HRC wildcard Bradl from 18th on his Honda.

Nakagami’s yellow flag cost team-mate Alex Marquez (Castrol LCR Honda) a chance to improve at that point and #73 would end up 19th on the grid, ahead of Iker Lecuona (Tech3 KTM) and Miguel Oliveira (Red Bull KTM).

The eighth and final row of the grid will be Danilo Petrucci (Tech3 KTM) and team-mates Valentino Rossi and Andrea Dovizioso, the former of that Petronas Yamaha SRT duo having crashed on a slow lap during his first run.

Both sessions were run in somewhat overcast conditions, after rain affected the opening day of the event.