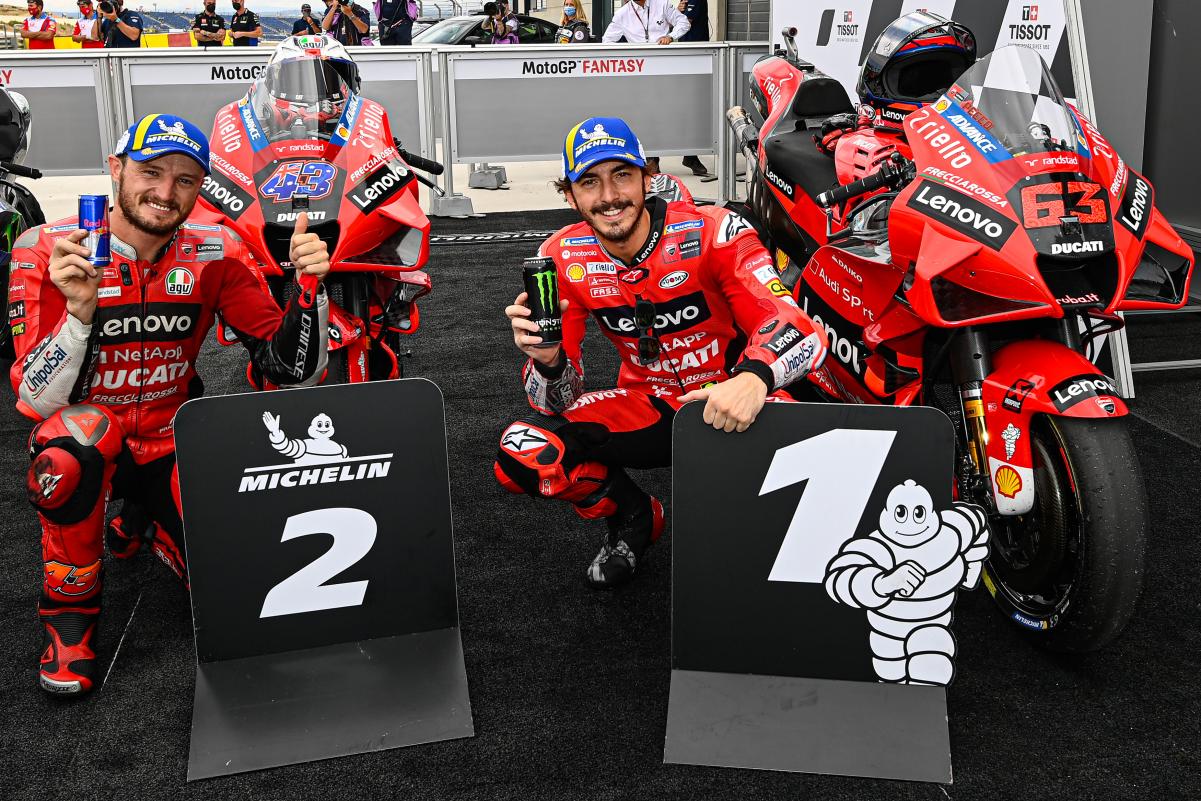 Jack Miller says that he is willing to help Ducati team-mate Francesco Bagnaia win the MotoGP championship after the Italian moved back into second spot with his Aragon victory.

Bagnaia still trails Yamaha’s Fabio Quartararo by 53 points, the equivalent of 2.12 races, with only five rounds remaining in 2021, but his attitude towards his title chances seemingly changed at MotorLand Aragon.

Having declared after a shocking result at Silverstone a fortnight earlier that Quartararo had already won the championship, he said that his maiden premier class victory had given him “great motivation”.

Miller, too, gained ground on the championship leader at Aragon, but only three points by finishing fifth compared to the Frenchman’s eighth, and is now 85 points in arrears ahead of this weekend’s San Marino Grand Prix.

The Australian therefore has an eye on the position of the #63 Ducati Lenovo Team entry at Misano.

“I’d love to get myself on the rostrum,” said Miller.

“I need to keep plugging away at it and try to take the best out of any situation we get.

“Pecco’s [Bagnaia] doing a fantastic job and caught back some decent points on Fabio the other day, so it’s definitely not out of the question for him.

“As I’ve said all along, I’m here, I’m a team player and I’m happy to help out whichever way I can.

“Not saying [I would do] anything bad or anything like that, but if I can see an opportunity to try and help Pecco I’ll definitely try and do that and that’s our plan.

“At the end of the day, we are here to try and get the big red beast on top.”

Miller held third for the first half of the Aragon Grand Prix before he ran wide and let both Joan Mir and Aleix Espargaro through.

While comments in his post-round newsletter suggested an issue with his leg, it was in fact a technical problem with his Desmosedici’s gearbox which made it difficult to use the lever to shift.

His team-mate’s main problem was a certain Marc Marquez, who fired the #93 Repsol Honda down the inside seven times in the last three laps but could not make any of those moves stick.

Speaking after that race, Bagnaia’s stance on the championship had apparently changed, as he left open the possibility that Quartararo can be caught.

“To be fast, the same as this weekend [Aragon], and to do the race more in front possible, and then I don’t have to think about Fabio.

“I can’t think on the championship because I have to push every time and I have to recover more points every time to have this opportunity to win.

“Fifty-three points are still a lot and it will not be easy but our ambition to win is very big and this victory gave to me a great motivation for the next races.”

Practice for the San Marino MotoGP round commences this evening (AEST).