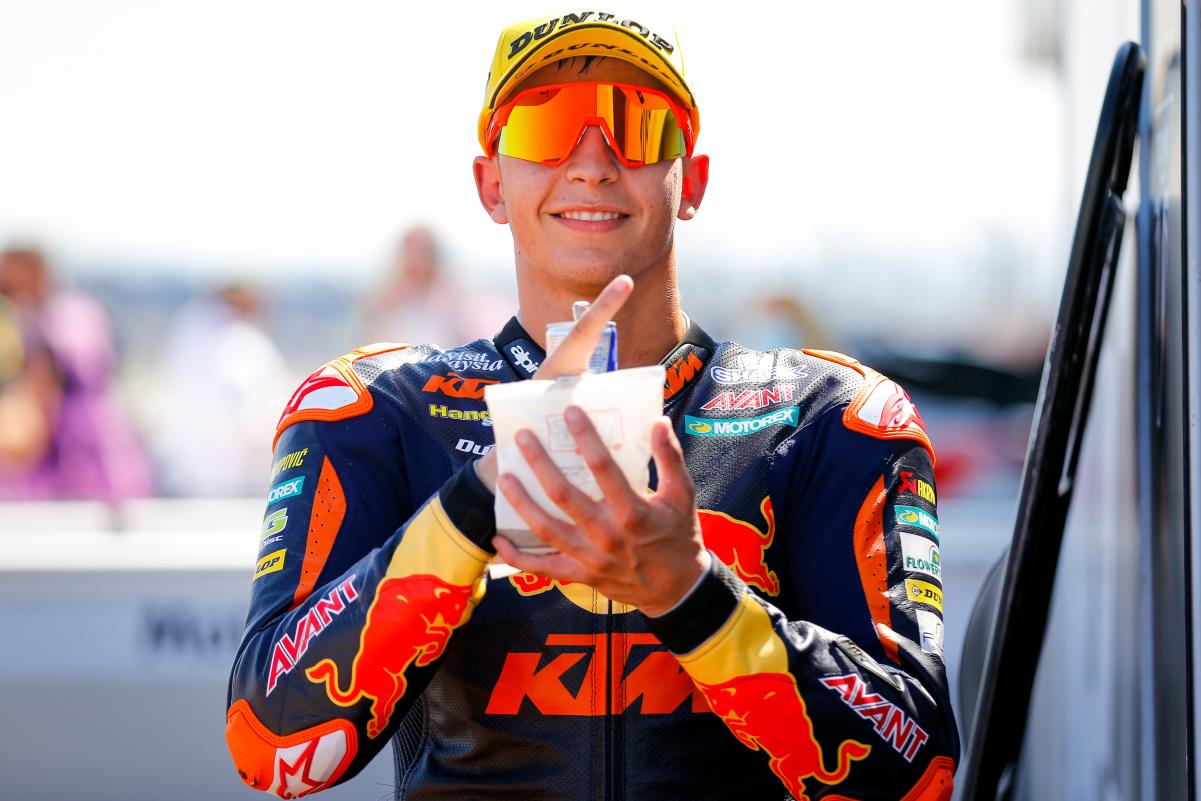 Raul Fernandez, Remy Gardner’s team-mate and Moto2 title rival, expects that his broken right hand will continue to cause him pain in this weekend’s San Marino Grand Prix.

Fernandez gritted his teeth to win last weekend’s Aragon Grand Prix, just a week after he underwent surgery following a break of a metacarpal in a cycling crash.

The Spaniard had feared that he might not be able to race, but qualified on the front row at MotorLand Aragon and decisively took the lead after barely more than three laps.

Asked by Speedcafe.com after that race if the injury will continue to be an issue at Misano, Fernandez said he expects it will.

“I think yes, but I hope not too much,” the Red Bull KTM Ajo rider responded.

“Because, I will continue with the point [stitches] on the hand.

Fernandez’s win at Aragon makes for five so far in what is his rookie Moto2 season, which still has five races to go.

That achievement puts him in the company of Marc Marquez, who was the last rider to rack up at least that many victories as an intermediate class rookie, when he scored seven in 2011.

“It’s impressive, because it’s my first season here in Moto2, and it was really difficult to get one victory Moto3 and now I have five,” said the 20-year-old.

“I don’t know why,” he laughed, “but for me, it’s much better bike for my body, for my weight.

“I don’t know, I don’t want to think about this because it’s a great name, Marc Marquez, no?

“I will try to get more, but I’m really happy, this season for me is amazing.

“Day-by-day, we improve with the team, I’m really happy, I have one family – you know, one team – and this is the most important for me.”

Fernandez’s win was not just a personal milestone, but was Red Bull KTM Ajo’s 100th in all grand prix classes, and helped to seal the teams’ championship.

Gardner, who leads the riders’ championship by 39 points over his team-mate, has contributed four wins and a further six podiums this year, and was delighted to play his part.

“It’s an incredible story,” said the Sydney-born rider, who finished second to Fernandez at Aragon.

“You know, that goes down in the history books, me and his name will be there as well, as the riders.

“I think it shows how good a team that it is. We’ve absolutely dominated as a team this year and winning the championship with even five races to go, it’s pretty sexy.

“Aki [Ajo, team owner] does a great show, he puts a great team together.

“The guys in the box work hard all the time and they’re an amazing group of people. It’s like a family and like I said, it shows with the results.”

Gardner and Fernandez will ride a KTM MotoGP bike for the first time in a test at Misano next week.

Before then, practice for the grand prix starts this evening (AEST).