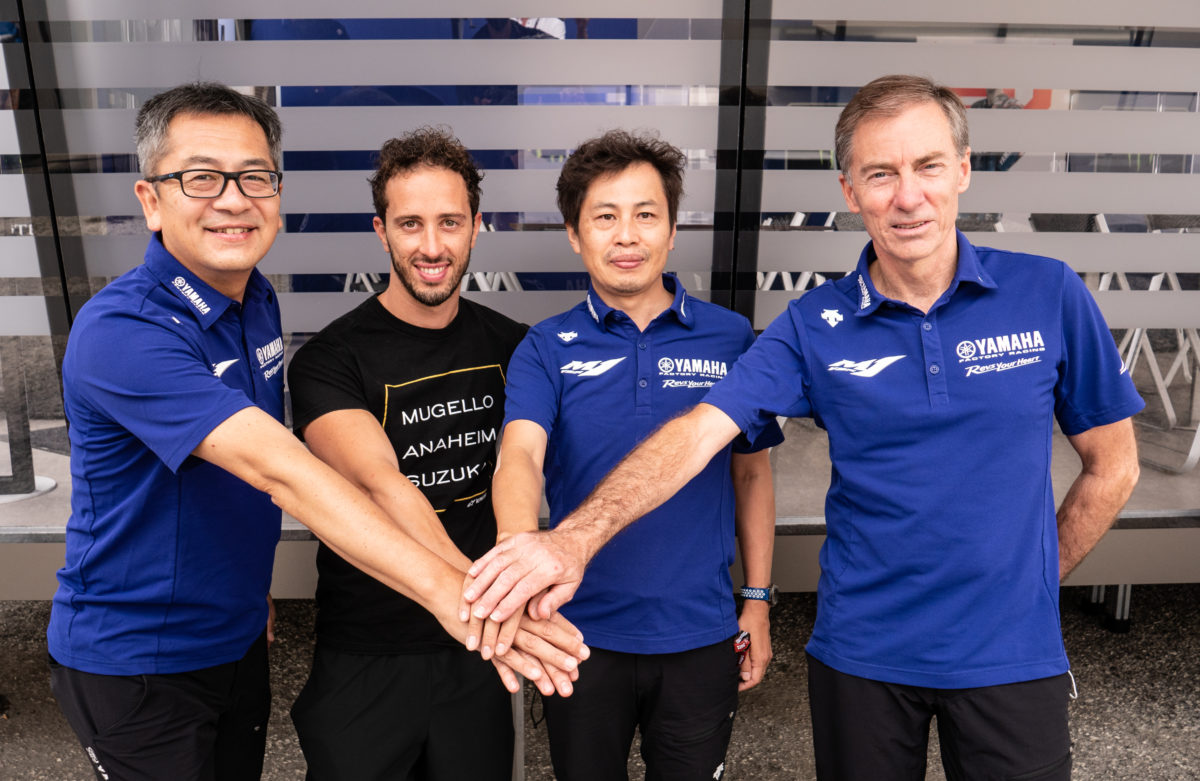 Yamaha has confirmed that it has signed Andrea Dovizioso until the end of the 2022 MotoGP season.

Dovizioso’s deal will take effect when he rides for Petronas Yamaha SRT from this weekend’s San Marino Grand Prix, with the Italian to continue at whichever team replaces it on the grid next year.

The union between the long-time Ducati factory rider had been described by Yamaha chief Lin Jarvis almost three weeks ago as having been the subject of a “verbal agreement”.

Now official, it frees Franco Morbidelli to ride for the factory Monster Energy Yamaha team, which he will do for the first time also this weekend at the Misano World Circuit Marco Simoncelli.

Morbidelli in turn fills the breach left by Maverick Viñales’ dramatic exit from the Iwata manufacturer’s ranks after his apparent attempt to blow up an engine at the Michelin Grand Prix of Styria.

“Racing with Yamaha has always been my dream, and that’s why when the opportunity arrived I did not think twice, although I know it’s going to be a tough challenge for me,” said Dovizioso.

“I’ve got many things ahead of me to learn: a new bike, a new team, a new working system.

“It‘s a big challenge that starts at Misano, my home GP. This makes it even more exciting. I can’t wait to be aboard my M1.”

The 35-year-old takes over Morbidelli’s bikes and thus is saddled with the ‘A-Spec’ 2019 YZR-M1 for now.

However, he will be handed factory-spec motorcycles and full engineering support from Yamaha next year.

Said Lin Jarvis, Yamaha Motor Racing’s managing director, “We are delighted that a MotoGP star and talent like Andrea is joining the Yamaha line-up.

“We warmly welcome him to the Yamaha MotoGP group as a very important member of our MotoGP programme.

“We have found ourselves in unprecedented circumstances this year that resulted in totally unexpected rider issues for both Yamaha teams.

“We experienced some unforeseen and unfortunate events, but we have been able to transform the problems into new opportunities.

“Andrea has been away from MotoGP for a short sabbatical, but we are certain that a rider of his calibre will soon find his speed again.

“We are really looking forward to working with him as a member of Yamaha‘s satellite team, and we will be supporting him in every way we can.”

Dovizioso has spent one season on a Yamaha, with its then-satellite team Tech3.

That came between his four years with Repsol Honda, which produced one race win, and eight years with the Ducati Team which yielded his other 14 victories in the premier class, and three runner-up finishes in the championship.

Viñales, meanwhile, will make his second start with Aprilia Racing Team Gresini this weekend, and is contracted also to the Noale manufacturer for at least 2022.