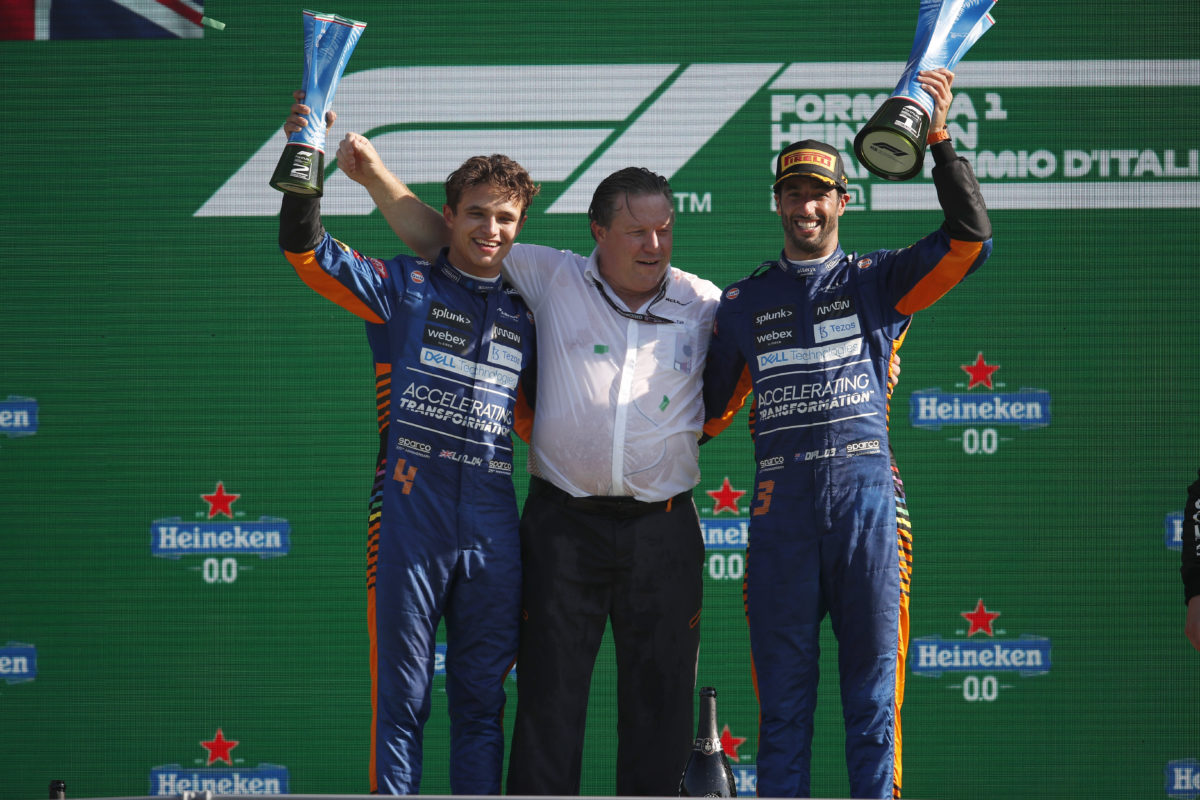 Second place in the Formula 1Italian Grand Prix behind team-mate Daniel Ricciardo was a positive result for Lando Norris.

The Brit shadowed his McLaren colleague throughout much of the 53-lap Monza affair to deliver the team’s first one-two result in more than a decade.

It was also something of a reversal in fortunes for the pair, Norris having held the upper hand through the opening half of the season only to witness Ricciardo claim line honours.

“The main thing that it means to me is our result as a team,” he said following Sunday’s race.

“Whether I’m second, third, or first, I think the best thing is just having that that one-two for the team, securing the maximum points.

“It’s just such a cool feeling to be part of this.”

For a fleeting moment it looked as though the team-mate mates might battle it out for supremacy, Norris questioning team orders as they headed proceedings as Sergio Perez and Valtteri Bottas loitered with intent.

“I think I got a bit closer on one lap and I just kind of, I don’t know why, I had a few flashes of seeing the incident between Max [Verstappen] and Lewis [Hamilton], because I saw it quite well in my mirrors,” Norris confessed

“So when I thought ‘maybe I’ll try’, that kind of was flashing up in my head, and I thought ‘nah, maybe this isn’t the wisest decision’.

“I would have loved to, but like I said, I think I’m just as happy in a way.

“The feeling I get for the team is kind of priority over my own feeling in a way.

“I’m here for many more years, I hope, especially with McLaren and with our team, so I feel like I still have an opportunity in the future to try and go for it, but in this moment and instance, I was happy just staying where I was.”

Managing his expectations, and to a degree his disappointment, has been a key lesson for Norris during his Formula 1 career to date.

He stepped into the sport in 2019 as McLaren began climbing out of the slump it had found itself in for much of the previous decade, and had chalked up three podiums already in 2021.

That built on his maiden rostrum appearance last year, though Monza marked the best result of his career.

It was a result that came after a mediocre performance from McLaren in Zandvoort a week earlier, and arguably a missed opportunity in Belgium as the season restarted following the summer break.

Even prior to that, in Hungary, Norris was towards the pointy end when he was involved in the opening corner calamity which also caught out Ricciardo and Verstappen, among others.

“One of the things I’ve learned within, I guess, more so Formula 1, is learning when things are in your control,” he explained.

“It’s one of many, many things really,” he added.

“I’d say it’s quite an important one because it can change the way you think about things and your mentality of Formula 1, and how you go into race weekends and how you recover and get ready for the next one.

“I think the simple things are still the key things that I’ve learned, and I’ve been reminded of, is enjoying my time here in Formula 1.

“The more I enjoy it, the more motivated I am, the more excited and ready I want to be for the next race, or qualifying, or whatever it is.

Norris remains fourth in the drivers’ championship with 132 points, having for a time sat as high as third.

Formula 1 next moves to Sochi for the Russian Grand Prix on September 24-26.