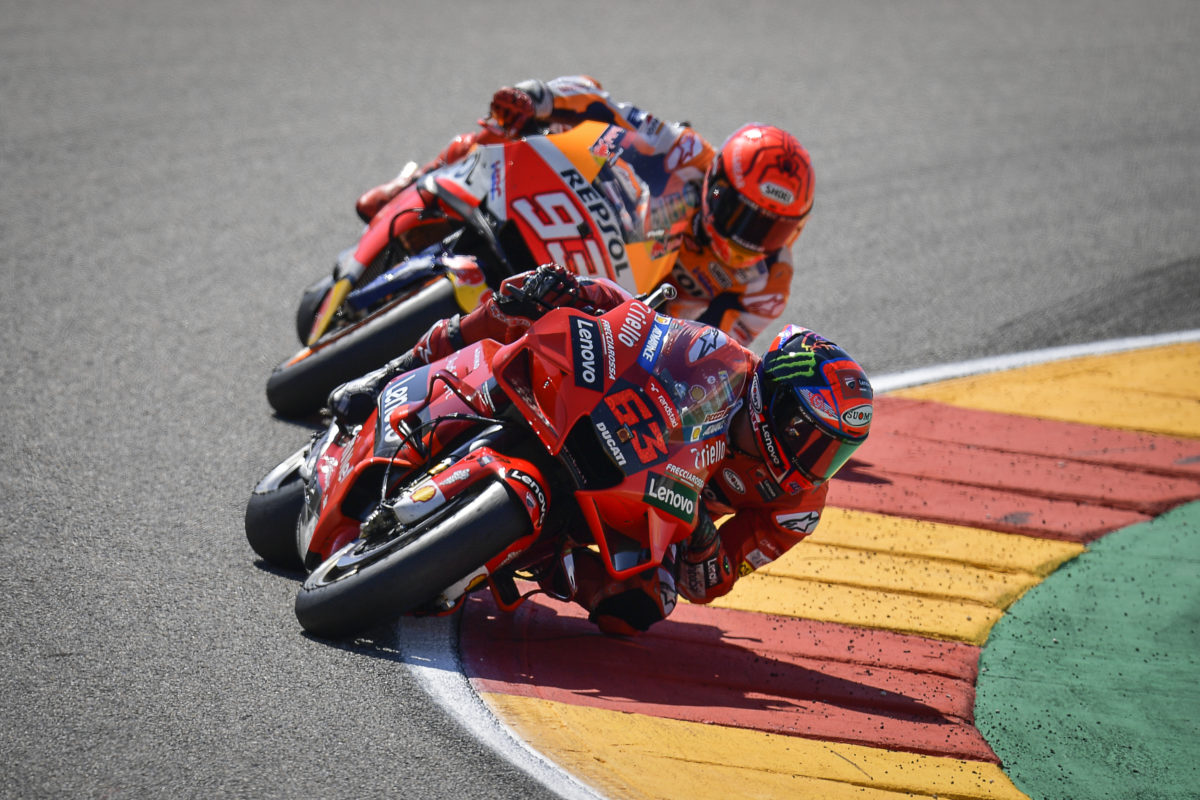 Bagnaia won the Aragon Grand Prix having had to re-pass Marquez seven times when the Honda rider made a lunge down the inside in the last three laps.

The Ducati Lenovo Team entries finished first and fifth at MotorLand Aragon, Jack Miller running in the top three before running wide and losing two spots around halfway through the 23-lap contest.

Miller’s post-round newsletter referred to an issue with his leg and difficulty changing gears, although further comments serve as clarification that it was in fact a technical issue which forced him to shift in a different way.

Dall’Igna was nevertheless ecstatic with the team’s performance, having seen Bagnaia defeat Marquez and become a MotoGP race winner in his 42nd start.

“A great, as well as long-awaited victory, well deserved and prestigious,” declared the Italian in his regular race review.

“[It was] achieved in the most breathtaking way after a closely contested battle against an inspired Marquez, constantly challenging and always as dangerous as only he knows how to be in situations such as these.

“Stress that Bagnaia was able to masterfully manage, as much brave heartedly as intelligently, finally taking advantage of all his talent with the utmost clear-headedness, and with impeccable trajectories.

“On this track we expected our rivals to be extremely competitive, but when one has to deal with the Spanish champion, as inspired as he proved to be, everything becomes much more difficult and as a result, even more satisfying.

“In short, an exemplary race, a result that proves that despite everything already being done the right way, it was however without being able to attain what was rightfully deserved.

“We stayed focused on our work, we absorbed the concerns and continued as usual.

“To the merit of the riders moreover, was their constant readiness, and today Francesco is reaping the benefits of these endeavours, and with him the whole team.”

Bagnaia is now second in the championship while Miller remains fifth, ahead of this weekend’s San Marino Grand Prix at the Misano World Circuit Marco Simoncelli.

The duo will be joined by test rider Michele Pirro, who will be making a wildcard start with Ducati’s factory team.