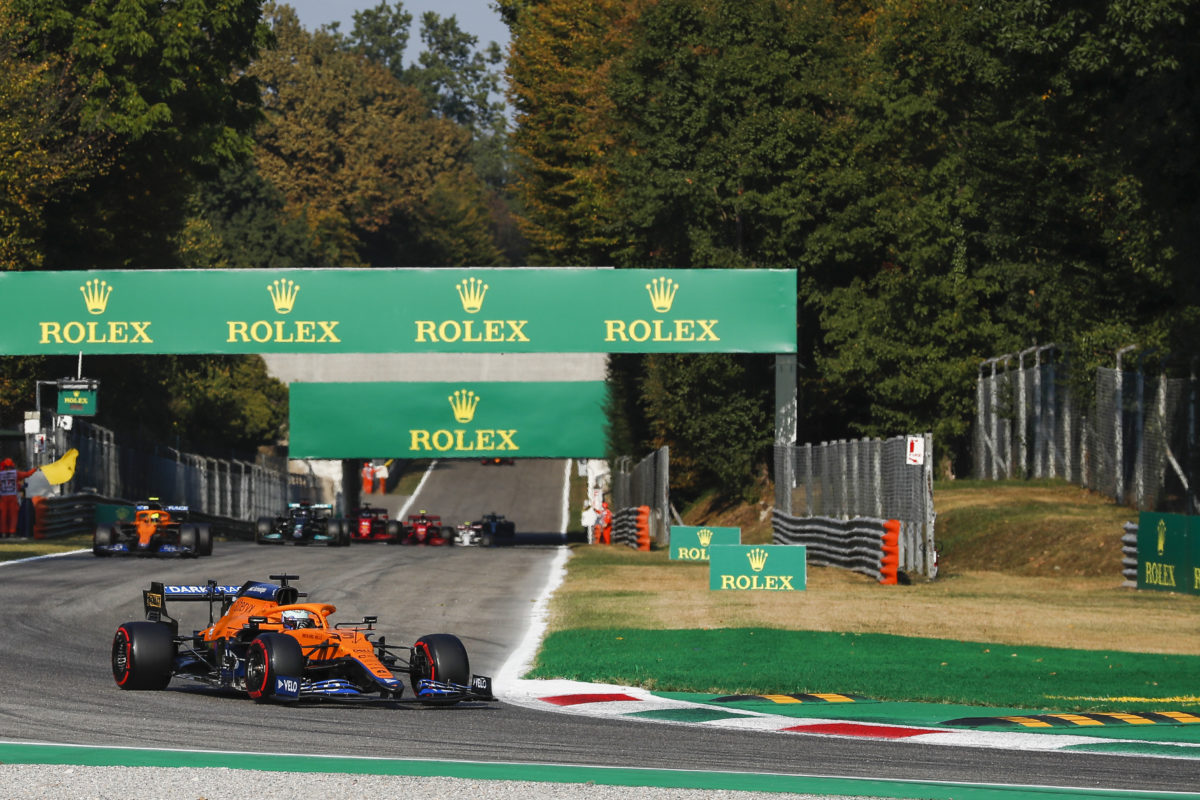 Daniel Ricciardo has taken a sensational victory in the Formula 1 Italian Grand Prix in a race dominated by a dramatic clash between the title protagonists.

Lewis Hamilton and Max Verstappen clashed at the Turn 1-2 chicane midway through the race, eliminating both and opening the door for Ricciardo to claim his first win since 2018.

The result also marked McLaren’s first win since the 2012 Brazilian Grand Prix, Ricciardo followed to the flag by Lando Norris for a one-two.

A lightning start saw Ricciardo head the field through the first chicane, winning the drag race against Verstappen off the line.

After starting fourth, Hamilton then attacked Verstappen into the second chicane, bouncing the Mercedes driver over the kerbs as Giovinazzi spun further back.

The exchange with Verstappen allowed Norris to recover the position he’d lost in the opening stanza as Hamilton fell in behind him.

The Virtual Safety Car was deployed briefly on the opening lap to clear the debris from Giovinazzi’s Alfa Romeo, the Italian shedding his front wing after he was pitched into a spin having been nosed by Sainz.

After three laps, Ricciardo held a slender advantage over Verstappen, the Dutchman within DRS range of the race leader.

Having started from the pit lane, Pierre Gasly’s race was soon over, pulling into the garage to retire after five laps.

It ended a disastrous race for AlphaTauri, Yuki Tsunoda having not taken the start after a fault was found on his car on the grid.

Though in Ricciardo’s wheel tracks, Verstappen was unable to mount a serious challenge, but kept the Australian under pressure.

It saw the 32-year-old run wide twice at Curva Alboreto on successive laps – drivers given three opportunities to exceed track limits before being warned by officials.

Behind the leading duo, Hamilton remained stuck behind Norris, the third placed McLaren 3.6s away from his race-leading team-mate.

As they began Lap 12, Hamilton attacked into the first chicane, forced to the outside as he drew alongside under braking.

The move covered, he then looked to counter as they accelerated out of the corner, the McLaren driver again countering the move to hold on to the spot.

A lap later, Valtteri Bottas rose to 10th, entering the points for the first time after starting 19th on the grid.

Ricciardo pitted from the lead on Lap 23, Verstappen remaining on track to take over at the head of affairs.

A hard set of Pirellis were bolted on to the McLaren, dropping him out on track behind Sainz in seventh.

Released, Verstappen struggled for grip and failed to set the time screens alight as his team would have hoped, diving into the lane next time around.

It was a poor stop, an 11.1s stationary time leaving him in 10th place.

As that was happening, Hamilton usurped Norris into the second chicane to take the race lead, the Mercedes driver holding a 16.6s advantage over Ricciardo, the first car to have stopped, in sixth.

That became fourth when he passed Sainz into the first chicane on Lap 25, at the same time as Norris took service to rejoin eighth.

Hamilton pitted on Lap 26, swapping his hard tyres for the mediums in a 4.2s stop.

He returned to the fray behind Norris but ahead of Verstappen, the duo going side-by-side into the opening chicane.

Contact resulted, sending them both off the road and out of the race.

Verstappen had been crowded for space, bouncing over the apex kerb which pitched him into the Mercedes alongside him.

The contact saw Verstappen’s rear wheels atop Hamilton’s airbox and halo, the Safety Car promptly deployed as the championship leader climbed free and walked away, the matter to be investigated after the race.

A flurry of pit stops followed, Ricciardo heading the field from Leclerc, Norris and Sergio Perez in a field jumbled as a consequence.

At the restart on Lap 31, an aggressive Norris moved clear of Leclerc to seize second on the run through the Curva Grande.

Perez passed Leclerc at the second chicane, bouncing over the kerbs to complete the move but holding on to third.

The second Ferrari of Sainz slipped behind the charging Bottas who put manners on him exiting the first chicane on the following lap.

The order after 33 laps ran Ricciardo from Norris, Perez, and Bottas, who slipped by Leclerc at the first chicane as they started the lap.

While the front three were on the hard tyres, Bottas was on the mediums, setting times well over a second clear of Ricciardo in the lead.

The front of the race was condensed, Ricciardo scarcely a second clear of Norris, who had Perez in DRS range who was dealing with a rapid Mercedes in his wheel tracks.

Perez’s cause was not helped when he was assessed a five-second penalty for gaining a lasting advantage when passing Leclerc.

By Lap 40, Bottas’ initial restart pace had been blunted as Leclerc began to inch back towards the leading quartet, Sainz not much further back in sixth – the group covered by 5.1 seconds.

The Finn made a move on Perez at the second chicane on Lap 44, getting ahead of the Red Bull only to lose the spot exiting the corner.

A brief Virtual Safety Car for Nikita Mazepin’s Haas failed to interrupt proceedings unduly, Ricciardo opening a handy lead which left him out of DRS range of Norris in the closing stages.

The second McLaren had also skipped clear of Perez, leaving the Mexican vulnerable to Bottas who remained locked on to the Red Bull’s gearbox.

The final laps peeled off without incident, Ricciardo comfortable from Norris and Perez clear of Bottas, whose tyres had finally cried enough despite his best efforts.

Ricciardo then claimed the victory he had dreamed of after Sprint Qualifying, ending a nine-year win drought for McLaren.

Third at the line was Perez, though his time penalty dropped him down the order, promoting Bottas onto the podium.