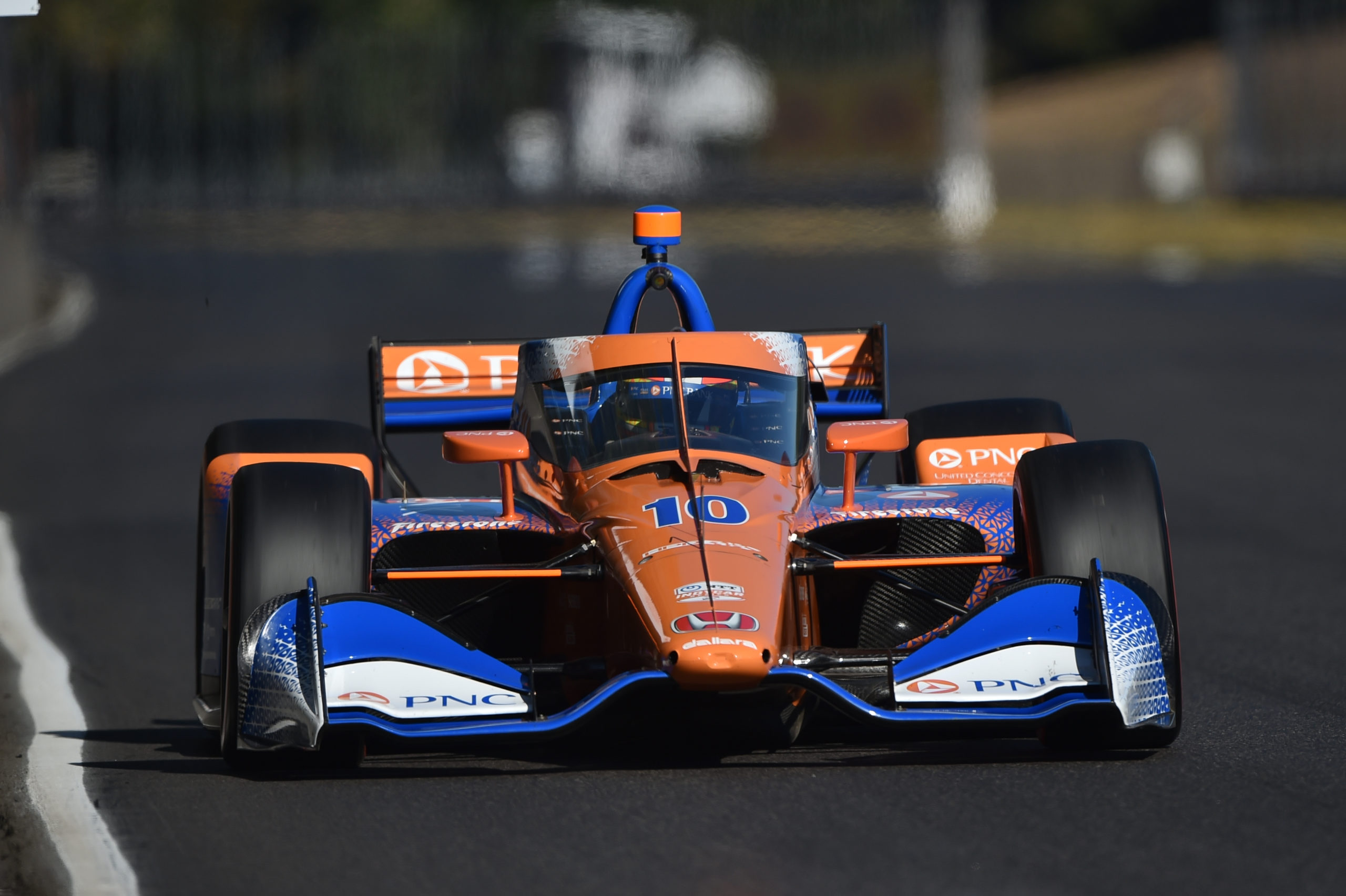 Alex Palou has returned to the top of the IndyCar Series standings after winning a wild 110-lap Grand Prix of Portland.

It was a comeback win of sorts for the 24-year-old, who started on pole position but was involved in the Lap 1, Turn 1 chaos which saw him go through the run-off.

An early pit stop would pay dividends as Palou made his way back through the field to beat Alexander Rossi (Andretti Autosport) and Scott Dixon (Chip Ganassi Racing).

It marks the third win for the Spaniard this season after previous successes at Barber Motorsports Park and Road America for Chip Ganassi Racing.

While it was a fruitful day for Palou, former series leader Pato O’Ward of McLaren SP was only 14th – dropping him to second in the standings and 25 points adrift.

“We kept our heads down, we knew that the race was really long, I cannot believe it, we made it,” said Palou.

“They just gave me the numbers and we just followed it. The strategy was amazing. Super proud for HPD, they gave us the power we needed.

“I don’t care that much about the points at the moment, I just think the race we did today is just amazing – not me, but the guys with the strategy, with the pit stops, with everything.

“With all the bad luck we had, we still won. I’m proud about that.”

Third place starter Dixon got the best start initially from the second row, surging past Rossi and taking a peek to the inside of Palou on the run down to Turn 1.

As the cars got on the anchors, Felix Rosenqvist (McLaren SP) got into the back of Dixon, who locked up and was forced to go through the run-off, taking Palou with him.

Further behind, Romain Grosjean (Dale Coyne Racing with Rick Ware Racing) steamed into the first turn and slapped the side of James Hinchcliffe (Andretti Steinbrenner Autosport).

Just behind them, former team-mates Will Power (Team Penske) and Helio Castroneves (Meyer Shank Racing) made contact and stopped at the Turn 2 apex.

Hinchcliffe would duly retire from the race due to damage while Grosjean and Castroneves returned to the pit lane for repairs.

Pole position starter Palou opted to pit under the yellow as did Dixon and Rossi. At the race restart, Palou was 17th, Dixon 18th, and Rossi 20th.

O’Ward pitted from the lead on Lap 29, returning to the race behind Askew in 16th. Rahal, who inherited the lead, opted to go long and pit on Lap 35.

The overcut by Rahal saw him return to the race ahead of O’Ward, effectively taking the lead.

As the pit stops continued, Rahal found his way back to the front on Lap 45. O’Ward was second and McLaughlin third.

Dixon returned to the race in 11th on the harder compound tyre, but was quickly usurped by Newgarden on the soft compound tyre.

Come Lap 50, Rahal’s lead over O’Ward was out to 3.5s with McLaughlin another 1.5s adrift.

Series debutant Callum Ilott (Juncos Hollinger Racing) and Dalton Kellett (A. J. Foyt Enterprises) ground to a halt on Lap 51 out of Turn 7 and Turn 1 respectively.

O’Ward, McLaughlin, Pagenaud, Ericsson, and Bourdais chose to pit before the Safety Car was deployed. Meanwhile, Rahal stayed out.

With the race under the control of the Safety Car, it was Rahal who led Jones, Harvey, Palou, Newgarden, Dixon, Rossi, Takuma Sato (Rahal Letterman Lanigan Racing), Rosenqvist, and Herta.

Racing resumed on Lap 58. It was a slow restart for Newgarden who came under attack from Dixon into Turn 1. Best of all was Rossi though, who blew by them both at the chicane.

Series leader O’Ward lost out to McLaughlin on Lap 59, the Kiwi moving up to 13th. Come Lap 61, the Mexican lost another spot to Pagenaud.

Soon enough the race settled into a rhythm as the final round of pit stops approached. Eventually, Rahal pitted on Lap 74 with a 1.7s lead over Jones who also pitted.

Harvey, who inherited the lead after Rahal and Jones pitted came to the lane on Lap 76. With a blistering in-lap, Harvey returned to the race in the lead.

As the pit stops continued, Rossi made his way to the effective lead of the race on Lap 79. Next to the pit lane was Dixon, who returned to the race between Palou and Rossi, though the latter soon got by at Turn 2.

Contact between Pagenaud and Power resulted in the former spinning at Turn 7, stalling, and bringing out another Safety Car intervention on Lap 86.

Palou led the field to the green flag with Rossi, Dixon, Harvey, and Newgarden in tow.

It was only a brief green flag run, however, as Askew spun at Turn 2 after receiving light contact from Bourdais.

It was a much cleaner restart at the second time of asking and ultimately set-up a clean run to the finish.

Try as he might, Rossi only got within a few car lengths of Palou and eventually made a mistake that would drop him 1.2s off the lead.

In the end, Palou romped home to victory from Rossi, Dixon, Harvey, and Newgarden. Rosenqvist was sixth, Ericsson seventh, Herta eighth, McLaughlin ninth, and Rahal the last of the top 10 runners.

The series continues next weekend at Laguna Seca for the Grand Prix of Monterey.