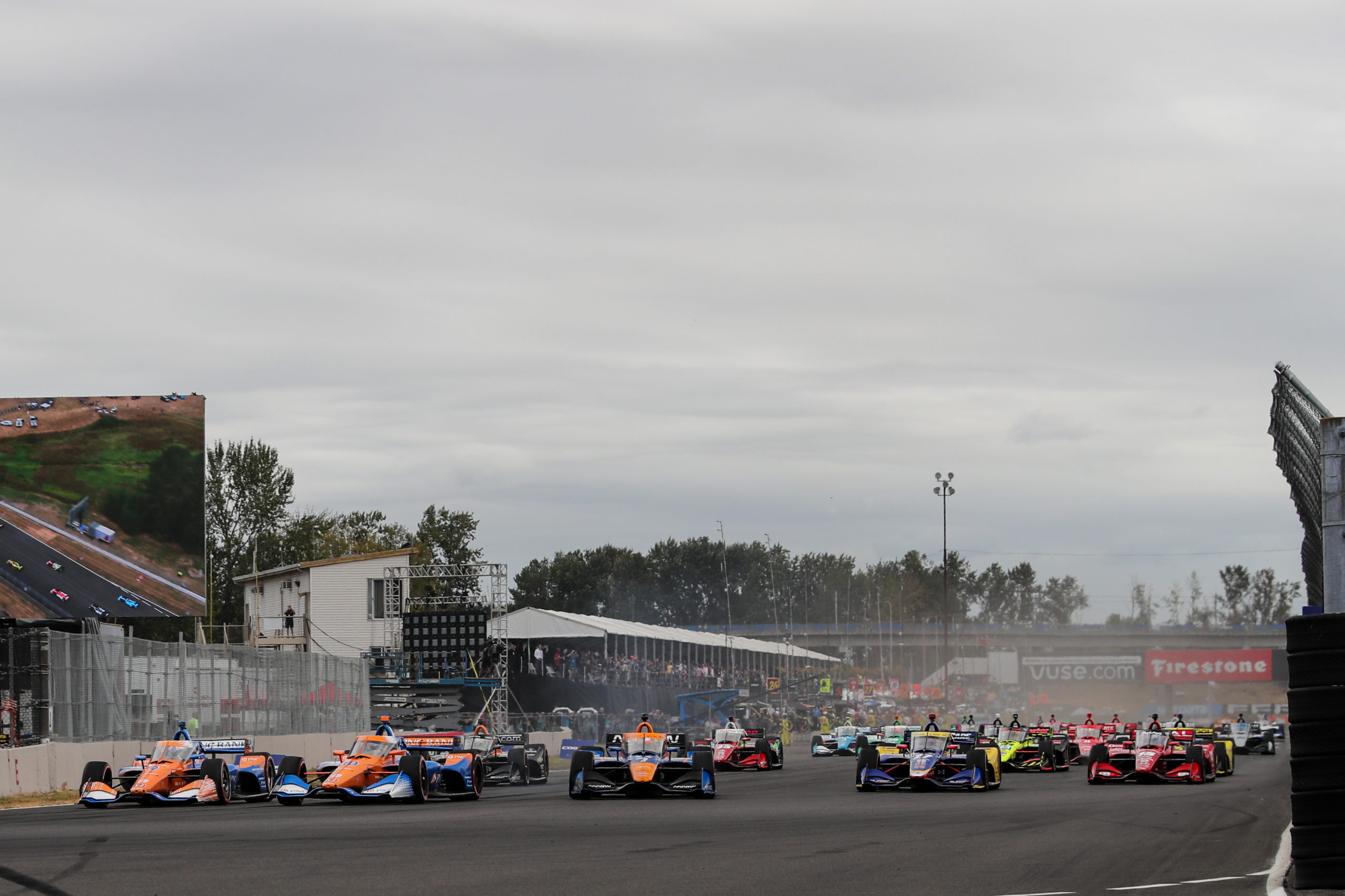 The start of the Grand Prix of Portland. Picture: Joe Skibinski

Grand Prix of Portland winner Alex Palou was left bemused by race control’s decision to demote him down the order after a Lap 1 incident.

Chip Ganassi Racing team-mate Scott Dixon, who started third, was hit from behind by McLaren SP pilot Felix Rosenqvist on the run down to Turn 1 on the opening lap.

With his front wheels locked up, Dixon missed the first turn and shortcut Turn 2. In doing so, Dixon came across the nose of Palou who was forced to follow suit and go through the runoff.

The team-mates returned to the race in ninth and 10th respectively as the Safety Car was deployed, but were later dropped to 17th and 16th after a reshuffle of the order by IndyCar.

That, Palou said, was unwarranted, believing the additional chicane the drivers navigated was enough penalty in itself.

Rosenqvist, Andretti Autosport pair Alexander Rossi and Colton Herta, as well as Ed Carpenter Racing’s Conor Daly were also relegated towards the back.

Prior to the race drivers had been told that if they shortcut the dogleg then they would be relegated behind those who did make it through the sequence of corners.

“I didn’t see any replays, so I don’t really know what happened there,” said Palou of the incident.

“I know Scott was on the inside. I got hit at some point… I knew I had to go through the chicane.

“I made it through the chicane, and I said, ‘Okay, I only lost like five positions’, which is a lot, but I said, ‘At least I’m not out’.

“And then IndyCar decided that that was not penalising enough, and they put me in the back, which I don’t know what they want me to do at that point.

“Do they prefer me to like completely stop the car and make that corner, making the race unsafe? So I’ll ask Kyle [Novak, race director]; I think it was not right.

“It’s true that they gave us the option of doing that strategy that gave us the win today, but still, I think it didn’t really make sense.

“I wanted to sit down with IndyCar and say, ‘Like please, can you explain what just happened?’ I wanted to understand.

“If I give up, what can I expect from the guy at the pit stops? We never gave up.”

As it turned out, Palou would go on to win the 110-lap race.

Ironically, the time that it took to reorder the field after Palou and several cars shortcut the dogleg worked in the Spaniard’s favour having been able to save fuel.

“I think when they were taking a long time to penalise us it was counting laps, and I was like, ‘Okay, this is a good thing. I know we can make the fuel mileage to make it in two only stops.’

“And at that moment, I said, even if we were P5, I knew they were going to penalise us, but I knew that we had another option.

“We knew we had a really fast car. Even if we were on the same strategy as everybody, maybe we were not able to win, but I think today we were able to be in the top five, top six without a different strategy.

“You never know. Like at the end with that yellow, that put a lot of people on the same strategy as us. I said, ‘Oh, man, maybe that’s not good for us’.

“Then that last yellow, that made us restart on blacks [hard compound tyre] while everybody was on reds [soft compound tyre], didn’t really help us. But anyway, we made it.”

Palou’s third win this season has taken him back to the top of the standings, 25 points ahead of Pato O’Ward of McLaren SP.

The IndyCar Series continues next weekend (September 18-20) at Laguna Seca for the Grand Prix of Monterey.