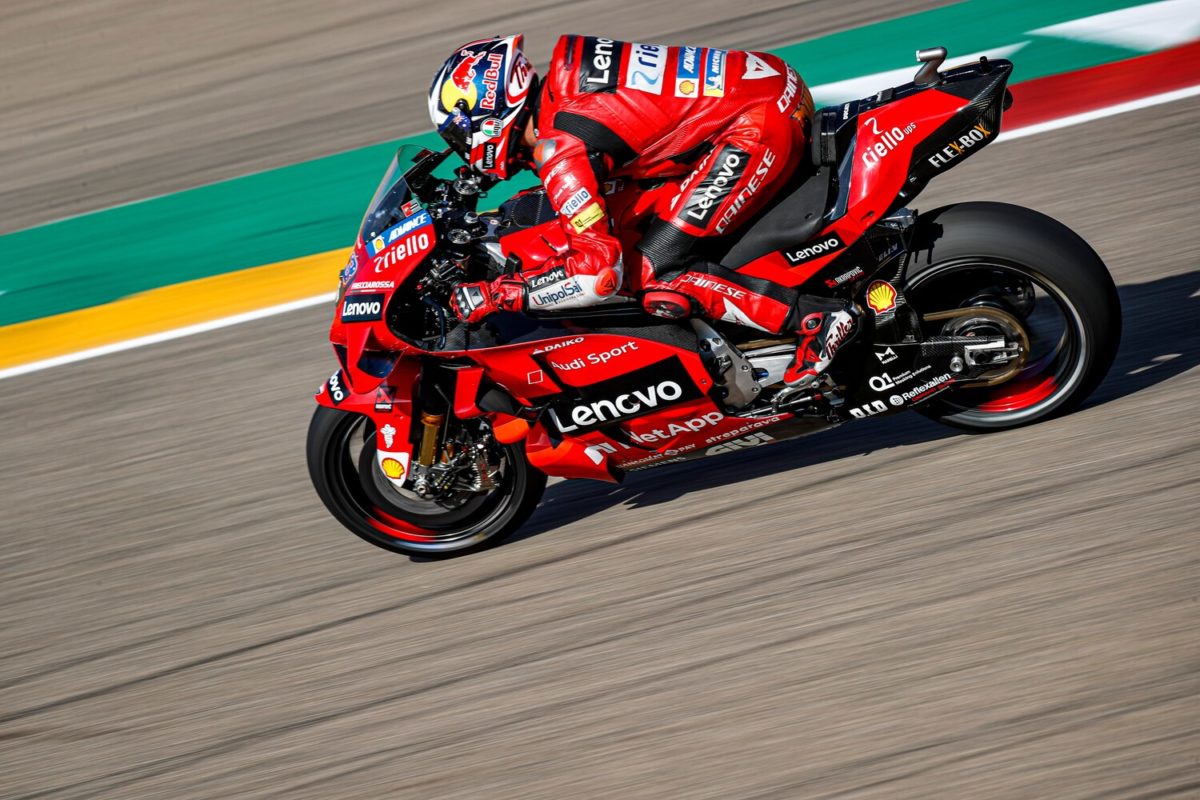 Jack Miller says he suffered from a strange leg issue on his way to fifth in MotoGP’s Aragon Grand Prix.

Miller held third for almost the entirety of the first 11 laps, albeit while slowly losing touch with Francesco Bagnaia and Marc Marquez, before a mistake at the Turn 16/Turn 17 sweeper.

There, he ran well wide of the race line, opening the door for Aleix Espargaro and Joan Mir, and that was decisive for the Ducati Lenovo Team rider.

He would remain fifth for the balance of the 23-lap race, in which team-mate Bagnaia prevailed over Repsol Honda’s Marquez in thrilling fashion.

Miller revealed in his post-round newsletter that he found gear changes difficult due to an unspecified leg problem, which made braking problematic.

UPDATE: Further comments from Miller have clarified that it was in fact an apparent technical problem in the gearbox

“I would have liked to have joined him [Bagnaia] up there but I had some issues with my leg that were a bit weird with the lever as I was trying to shift gear,” he wrote.

“I kept making mistakes on the gearbox and while I could hang in there with Pecco [Bagnaia] and Marc early on, it just kept happening and I eventually ran long into the last corner and Joan and Aleix came past me, I gifted them the places really.

“I went out of the track at the last corner and kept going wide at Turn 1, so it was a strange one.

“My tyres went well and I felt good on the bike, but it just wasn’t to be today.”

Miller had qualified second at MotorLand Aragon, albeit at 0.366s slower than Bagnaia’s pole lap, and had “mixed feelings” about the final outcome.

However, he was happy for his team-mate, whose victory was the Italian’s first in the premier class.

“I have to admit, I have some mixed feelings after that one,” stated Miller.

“Fifth after starting second… I’m not happy, but I’m not disappointed either. It’s kind of a level feeling, you could say.

“I’m rapt for my team-mate Pecco to have his first win though, and to do it after a massive battle with Marc – he earned that one, so that’s great for him.

“He’s shown time after time that he has the speed, but it hadn’t happened for him for one reason or another,” added Miller.

“It’s been coming for a while, and he might have won at Mugello if he’d not crashed there because he had the speed.

“So, he has a win now this year, I have a couple, and let’s see if we can add a few more victories before the season ends.”

Bagnaia has climbed to second in the championship at 53 points behind Fabio Quartararo, who only finished eighth at his “worst track” on the calendar.

Miller remains fifth, but now only eight points behind Johann Zarco, who was classified only 17th on the weekend during which he revealed he has developed an arm pump problem.

Round 14 of the season is the San Marino Grand Prix, at Misano, this coming weekend (September 17-19).