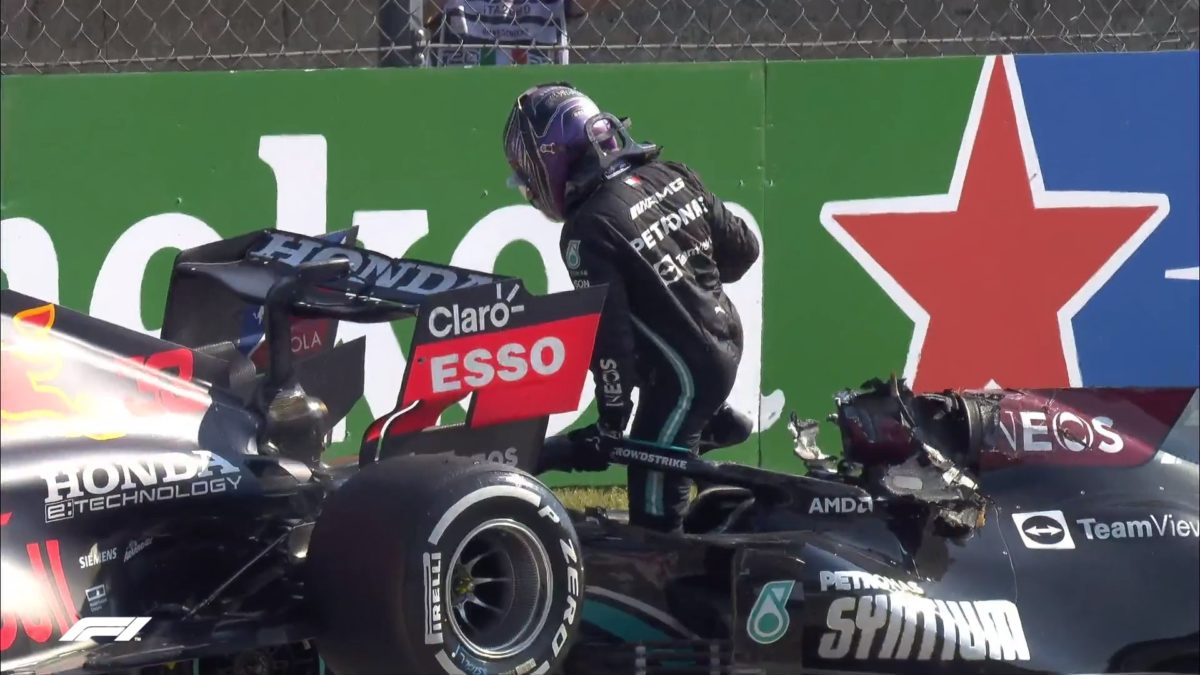 Lewis Hamilton has credited the halo with saving his life after Max Verstappen ended his Formula 1 Italian Grand Prix atop his Mercedes.

The title rivals crashed out in spectacular fashion midway through the race at the first chicane, wheel-to-wheel contact throwing the rear of the Red Bull skywards.

It came to rest on Hamilton’s airbox before sliding down onto the halo, Verstappen’s right-rear wheel impacting the seven-time world champion’s head in the process.

“Thank God for the halo, it saved me,” Hamilton said.

“I don’t think I’ve ever been hit on the head by a car before, my head really is quite far forward.

“I’ve been racing a long, long time, I’m so, so grateful that I’m still here.

“Feel incredibly blessed, like somebody was watching over me today.”

Hamilton’s relief was shared by team boss Toto Wolff, who also credited the halo with saving his driver’s life.

“It would’ve been a horrible accident, that I don’t want to even think about if we wouldn’t have had the halo.”

He subsequently revealed that he’ll likely seek treatment ahead of the Russian Grand Prix.

“I probably will see a specialist just to make sure I’m good for the next race, because it’s getting tighter and tighter,” he explained.

Slow stops for both had compromised their races, Red Bull taking more than 11 seconds to service the Dutchman.

Having run fourth during the opening stint, it afforded Hamilton an opportunity to gain track position against his title rival.

Instead, the pair made contact, Verstappen was quick to climb from his car, while Hamilton tried desperately to reverse out and rejoin the race.

In reality it was foolhardy, the Mercedes’ rear wing having been clouted by the flying Red Bull during the incident.

“Looking back at the footage, it happened incredibly quick in the car, and I was like, all I can think of is getting going and how many positions I’m losing; I’m still in race mode,” Hamilton said.

“I’m in a little bit of pain but just like ‘let’s go’ but the car wouldn’t move.

“In the moment it was a big hit but all I could think of was could I get going again.

“I saw Max get out and just walk by,” he added.

“I felt that was a bit surprising [because] when we have incidents the first thing we want to [do is] make sure is the guy we collided with is okay.

“But the good thing is I was able to get out. It was a long walk back, but we live to fight another day.”

Verstappen defended his actions, reasoning that Hamilton trying to reverse out from under his Red Bull indicated he must be fine.

“He was still trying to reverse when I was already out of the car.

Referred to the stewards and investigated post-race, Verstappen was subsequently handed a three-place grid penalty for the Russian Grand Prix next time out.

It’s days like today, I am reminded of how lucky I am. It takes a millisecond to go from racing to a very scary situation. Today someone must have been looking down, watching over me! #TeamLH: I’m so thankful for each and everyone of you, you are truly the best. Still we rise! pic.twitter.com/H2sGtXPKrr