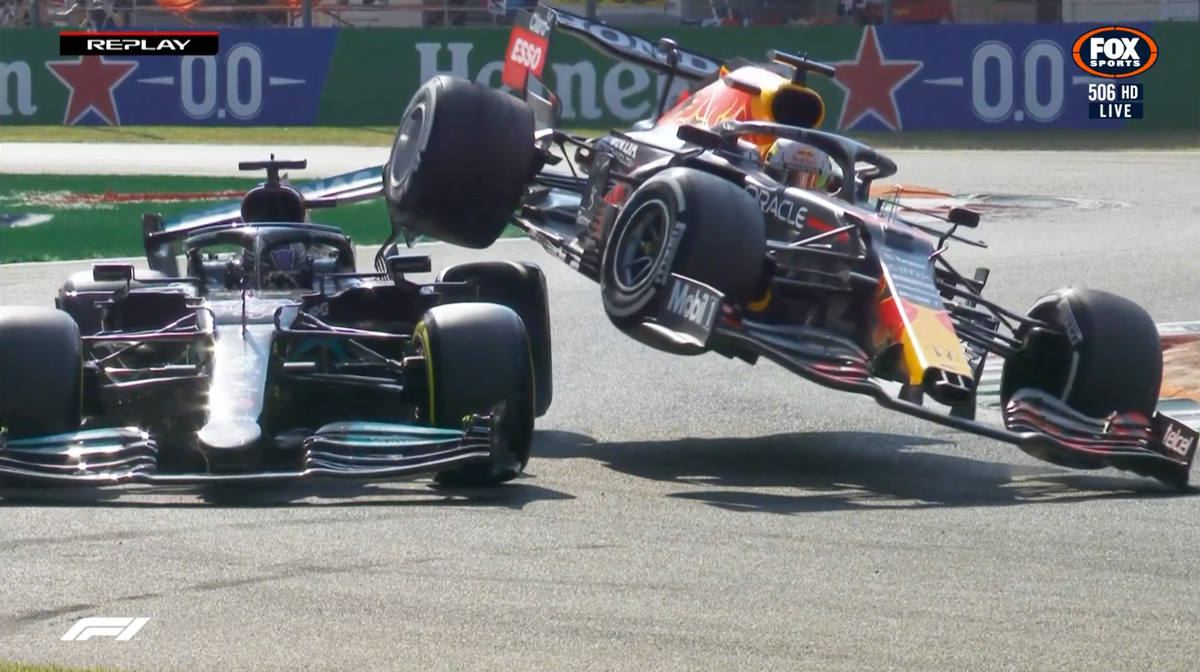 A new flashpoint has reared its head in the intense Formula 1 title saga after Max Verstappen and Lewis Hamilton clashed in an Italian Grand Prix won by Daniel Ricciardo.

Recovering from a slow pit stop, Verstappen tried to round up Lewis Hamilton as the Mercedes star himself emerged from the pits on Lap 26.

Verstappen lunged deep under brakes to hang around the outside of Hamilton into the first chicane, only for the two to collide as they jockeyed for position.

The contact launched Verstappen’s Red Bull into the air, its right-rear tyre landing on the halo protecting Hamilton’s head.

Verstappen wasted no time in storming away from the scene, seeming to indicate he was left no room upon returning to his team garage.

Hamilton had to wait a little longer to escape the scene, with the #33 still perched on top.

The incident follows the bitter aftermath of a high-speed accident between the pair while battling for the lead on the opening lap of British Grand Prix in July.

That brought weeks of jabs at one another in the media between drivers and teams.

The fallout of their second coming together of 2021 is that Verstappen retains a five-point lead in the drivers’ championship.

The Dutchman had looked set to extend his advantage, running second versus Hamilton’s fourth throughout the opening stint, until pit stop troubles brought him undone.

The pair had actually had a moment on Lap 1, with Hamilton running wide at the second chicane as Verstappen defended hard.

The Lap 26 incident will be investigated by the stewards post-race.

Mercedes ultimately widened its lead in the teams’ championship thanks to Valtteri Bottas’ impressive drive to third after starting 19th on the grid.

Red Bull’s Sergio Perez had crossed the line third, but with a five-second penalty hanging over his head for gaining an advantage by leaving the track in an exchange with Charles Leclerc soon after the sole Safety Car.

Ricciardo led home Lando Norris in a one-two for McLaren.