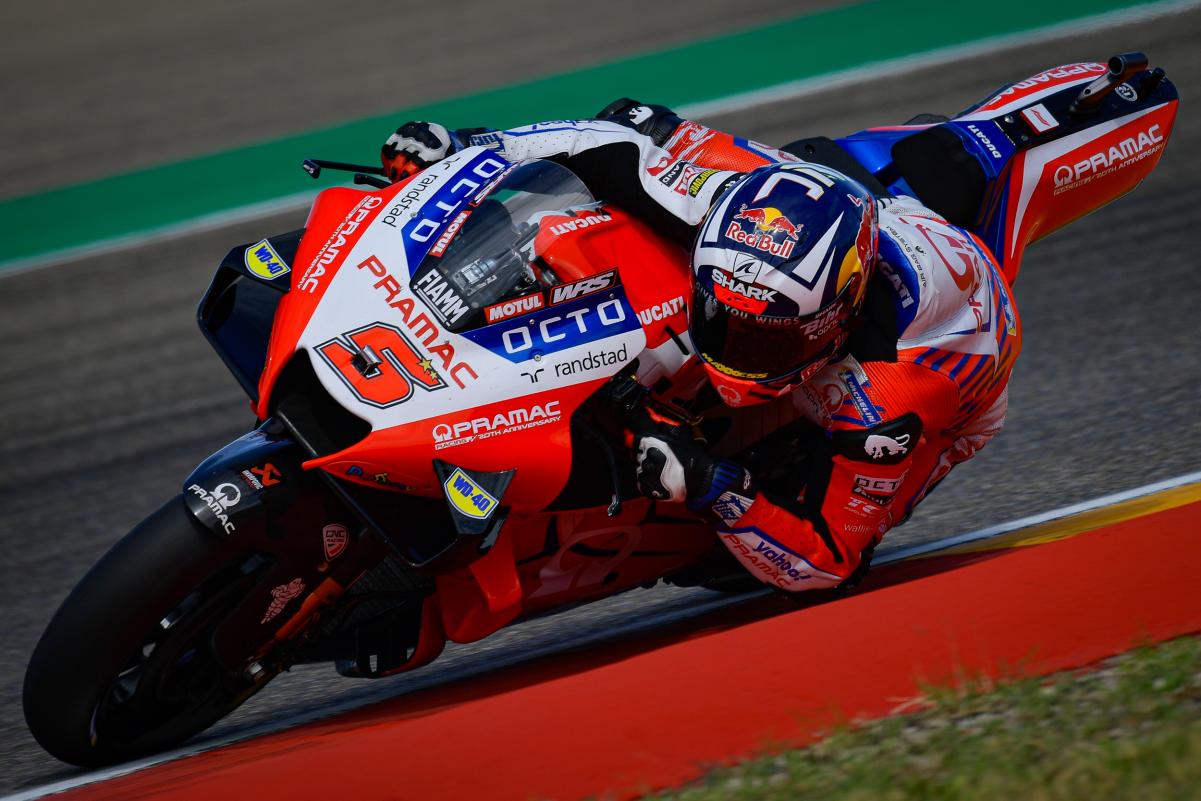 Johann Zarco has revealed that he is considering surgery later this season having developed an arm pump problem.

The Pramac Racing rider is Ducati’s highest-ranked in the MotoGP championship with two-thirds of the year’s 18 races complete, occupying third spot at one point ahead of factory team counterpart Francesco Bagnaia.

Even so, Zarco’s form has tailed off in recent rounds, having now not qualified on the front row at the last five times of asking (including this weekend at Aragon), nor finished on the podium in any of the last five completed races.

As it turns out, the Frenchman has been suffering from arm pump since before the summer break, and could undergo an operation in the almost three-week break after October’s Grand Prix of the Americas.

“Arm pump in Aragon is not a big problem, so I’m lucky,” he noted.

“But really, [I want to] try to diagnose it pretty well to decide if I do an operation or not, because I don’t want to run for the operation if I can fix it in another way.

“But at the moment, I don’t have any other solution, so that’s why I’ve been struggling a bit for many races, even before the summer break.

“Now, I find some limit that maybe will be necessary to do the operation, but I still have time.

“Anyway, I prefer to do all the races, don’t miss any one, and if, after Austin, it’s logically the right moment, I will do it.

“But at the moment, I’m racing in Aragon and without the pain, that’s quite good.”

Arm pump is also known as ‘chronic exertional compartment syndrome’, and is caused when the muscle expands due to exertion such that it meets a tissue called the fascia, cutting off blood flow.

Jack Miller had surgery for the issue after just two rounds of this season, Fabio Quartararo went into hospital after arm pump cost him a likely victory at Jerez, and then Aleix Espargaro underwent an operation on the same ailment.

This weekend at Aragon, Zarco could only claim 10th on the grid, having gone through Qualifying 1.

However, the 31-year-old was not blaming arm pump for that performance, instead admitting that he made a mistake and thus failed to improve on the 1:47.288s he set on his first run in Qualifying 2.

“Tough FP3 this morning, I’m only four tenths from the first guy but 11th position, so for just a bit I missed this Q2,” recalled Zarco.

“Happy about the Q1, I got a good lap time on both tyres, so this was positive, and also the beginning of the Q2 was quite positive.

“I’m a bit angry because I thought that I missed the second exit in Q2 with the new tyre, I didn’t do even one [representative] lap.

“I tried to use some tactic that nobody follows me and tried to catch someone but I missed it because the only lap I could push, I did a mistake, so I miss a good lap time on the last minute and for this reason I’m starting in P10.

“So, disappointed and a bit angry, and I hope tomorrow I will be strong enough to overtake.”