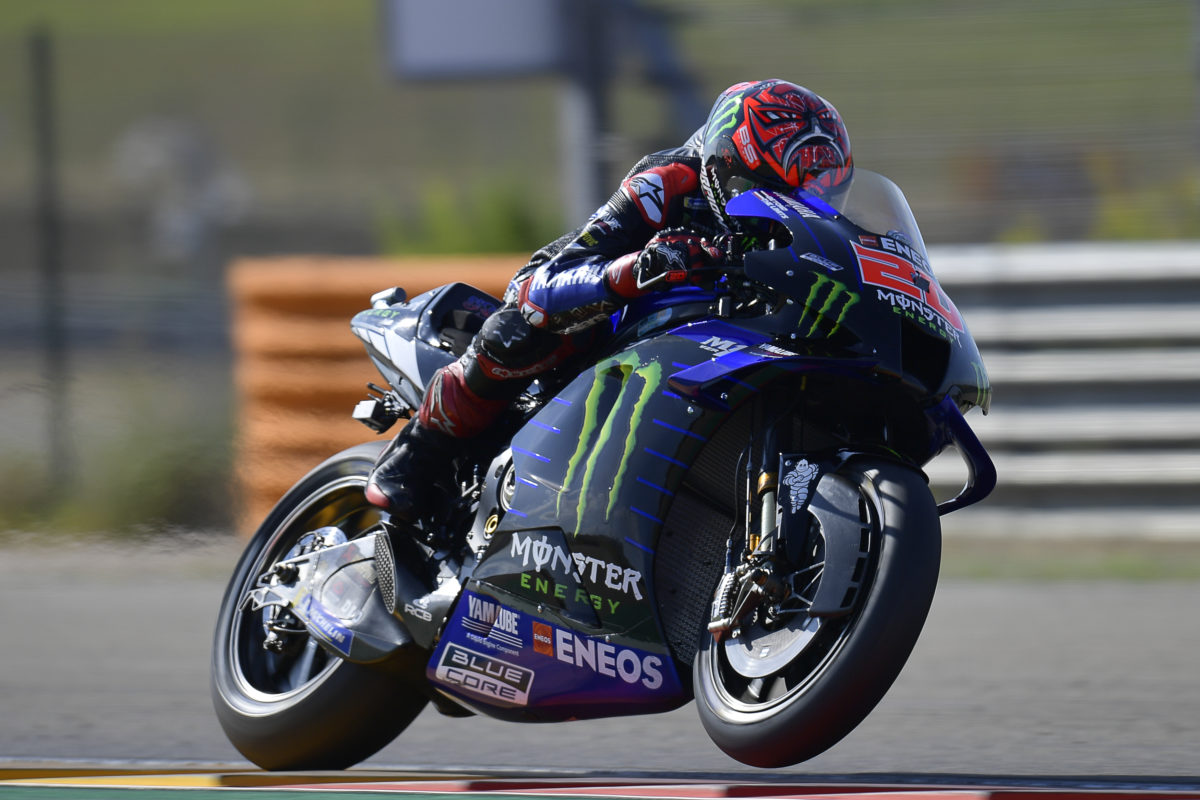 MotoGP championship leader Fabio Quartararo believes he is not fast enough to finish on the podium at the Aragon Grand Prix despite qualifying on the front row.

Quartararo is set to launch from third on the grid in the 13th race of the campaign, alongside factory Ducati riders Francesco Bagnaia and Jack Miller.

The Monster Energy Yamaha rider is currently 65 points clear at the top of the standings, and was fastest in practice at MotorLand Aragon.

However, casting an eye to the 23-lapper which awaits, Quartararo said, “I have not really a clear goal for tomorrow.

“I want to have fun. Of course, [it] would be great to fight for the podium, but to be honest I don’t feel I have enough pace.

“But right now, I feel that at least we need to make a step in the warm up, to be able to fight for the podium tomorrow, so let’s hope for an improvement in the warm up.”

The Frenchman suggested before this weekend that Aragon might be his “worst track” on the calendar, given his inconsistency at the Spanish venue.

He admits that he is still struggling particularly in Sector 4, which is comprised of the back straight and the long double-left which connects it to the front straight.

Yamaha is not near the top of the horsepower stakes, but Quartararo is also having his own personal battle with the Turn 16/Turn 17 sweeper.

“Sector 4 is a sector that, OK, the Yamaha is not that great but I’m doing something wrong on the last corner, too, so I think it’s a combination of everything that I’m really slow on that sector,” he explained.

“But we will see. We always tried something in FP2, FP3, FP4, and the base of FP2 was a little bit better, so tomorrow morning [warm up] we will go on the base setting and I will try to work on my riding style on the last corner.”

Bagnaia smashed Aragon’s all time lap record in setting the 1:46.322s which secured him pole, but Quartararo was only 0.031s away from Miller in qualifying third with a 1:46.719s.

The bulk of the time was lost in Sector 4, where Quartararo was about three tenths of a second slower.

Quartararo is going to look at how Franco Morbidelli negotiated Turn 16/Turn 17 last year on the ‘A-Spec’ Yamaha.

“It’s the kind of corner that we struggle a lot with the Yamaha, a little bit like Sachsenring,” noted the championship leader.

“Like, really long corners, we miss a lot of turning in the first part and we need to be really aggressive and it’s something that is difficult to me to do.

“Also Turn 10 [the long left-hander at the bottom of the Reverse Corkscrew], I managed to get a little bit better but I don’t feel great.

“So, tomorrow I will try something a little bit different. I check with Franco, last year he was doing something really great, and I will try to do it tomorrow morning, to check if it’s possible.

“But I’m struggling a lot on this kind of corners.”

MotoGP race start at Aragon is scheduled for 22:00 AEST.