Miller not worried about threat of Martin

Miller not worried about threat of Martin 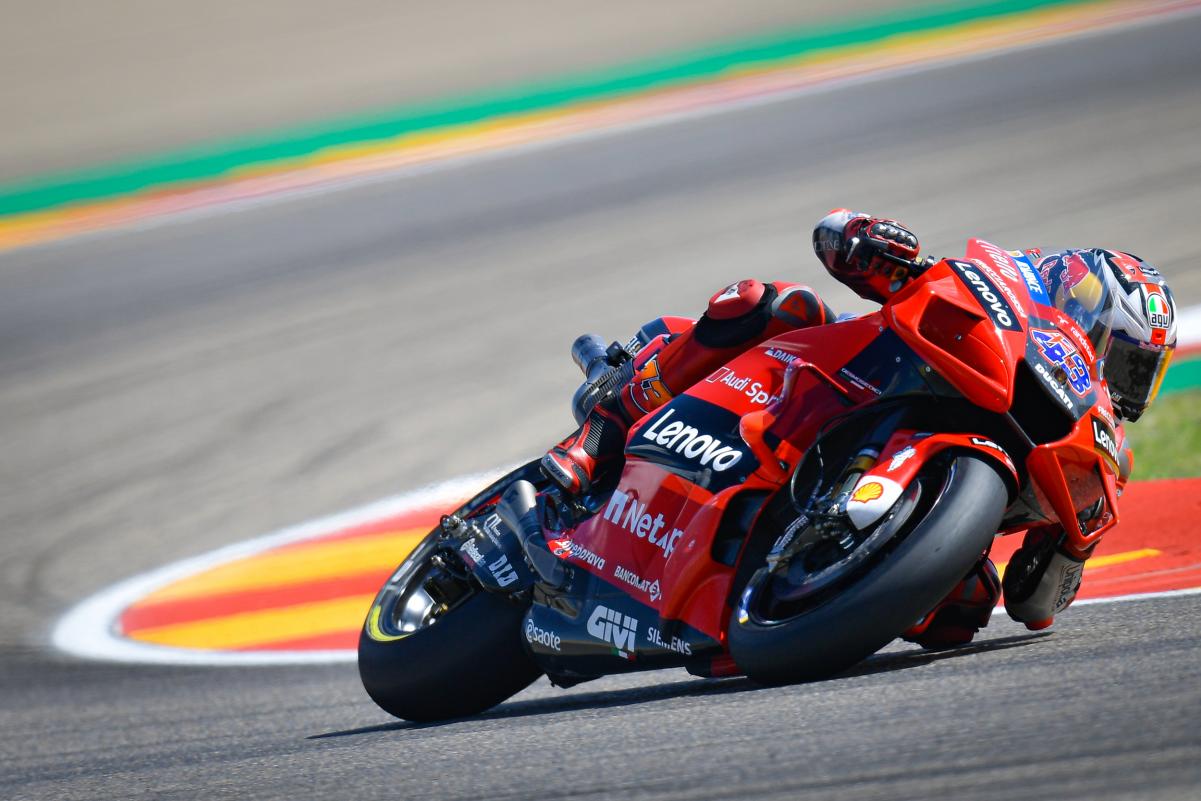 Jack Miller says that he is focused on the 2021 MotoGP season, amid signs that Ducati is very keen on promoting Jorge Martin to the factory team at some point.

Miller is responsible for two of Ducati’s three wins so far this season but it is Martin who has clearly impressed the Bologna hierarchy in what is his rookie campaign in the premier class.

The 23-year-old Spaniard gave Pramac Racing its first ever MotoGP victory in the Michelin Grand Prix of Styria and backed that up with a podium in a wet Austrian Grand Prix a week later.

He had qualified on pole for both of those races at the Red Bull Ring, having also done so just two rounds into his premier class career, and Ducati Corse general manager Gigi Dall’Igna gave a strong endorsement when subsequently asked about Martin’s chances of reaching the factory team in future.

“He has the full support from the factory,” Dall’Igna told Spanish sports newspaper AS.

Miller crashed out of that Styria race while chasing a podium, and had a near-miss last time out at Silverstone when he momentarily got ahead of Aleix Espargaro on the final lap but lost the spot again and ultimately finished fourth.

Ducati Lenovo Team manager Davide Tardozzi was lobbed a question about the latter result on the television world feed during Free Practice 1 this weekend at Aragon, at which time he chose to draw attention to the Queenslander’s “up and down” year and suggested a serious title charge is needed in 2022.

Miller’s contract for 2022 has indeed already been renewed, after his deal for 2021 was signed before predecessor Danilo Petrucci even got a chance to prove himself again in a late-starting 2020 season.

Agreements for one season are often reached early in that which precedes it, and Dall’Igna has previously expressed a belief that putting riders under pressure can in fact encourage them to perform better.

The factory Ducati pilots have collectively performed strongly this weekend, given Bagnaia shattered the all time lap record in qualifying and his Australian team-mate earned second on the grid.

Asked by Speedcafe.com about how much pressure he is feeling to convert that into a podium, given the above mentioned sentiments, Miller responded, “I’m good, I’ve got a contract for next year; at least I’ve got a job for next year.

“2023 is another story, but I hope I can keep a job, but for sure, there’s always pressure.

“I mean, it’s MotoGP, there’s always guys there to take your seat, but I try to focus on this year and maybe next year and see what we can do in 2023. Ducati was disappointing last year at Aragon, where its best finish across two races was Johann Zarco’s fifth on an older Desmosedici run out of Esponsorama Racing.

However, Miller was quickest in Friday practice this weekend and Martin makes for three of the Bologna bullets in the top five on the starting grid.

Miller believes he is “as best prepared as I’ve ever been” for Sunday’s race, while also reiterating just how well the Desmosedici GP21 gets around Aragon’s sweeping double-left at the end of the lap.

“Just rolling out of the box on Friday morning [this weekend], immediately felt like something was up, and the bike was fantastic.

“I’ve been on a Ducati a while and I’ve never had one that turns as good as this one through the last corner.

“Generally, corners like that [have] sort of caught us out in the past, whether it’d roll off the edge of the tyre or when you start to open, you start to lose the line.

“But this year, as we’ve seen, last sector’s ours, we’re claiming that one, and we’re able to really just follow the line through and be calm on the tyre and be fast.

“It was the last sector today that sort of saved me; I struggled through the first sector and was able to pull something out of the bag in the back half of the track.

“The bike’s working good, the pace was good, I’ve done a lot of laps today, I feel pretty knackered.

“But, [we have] a lot of info, we know what the tyres are going to do towards the end of the race tomorrow, so I feel probably as best prepared as I’ve ever been.