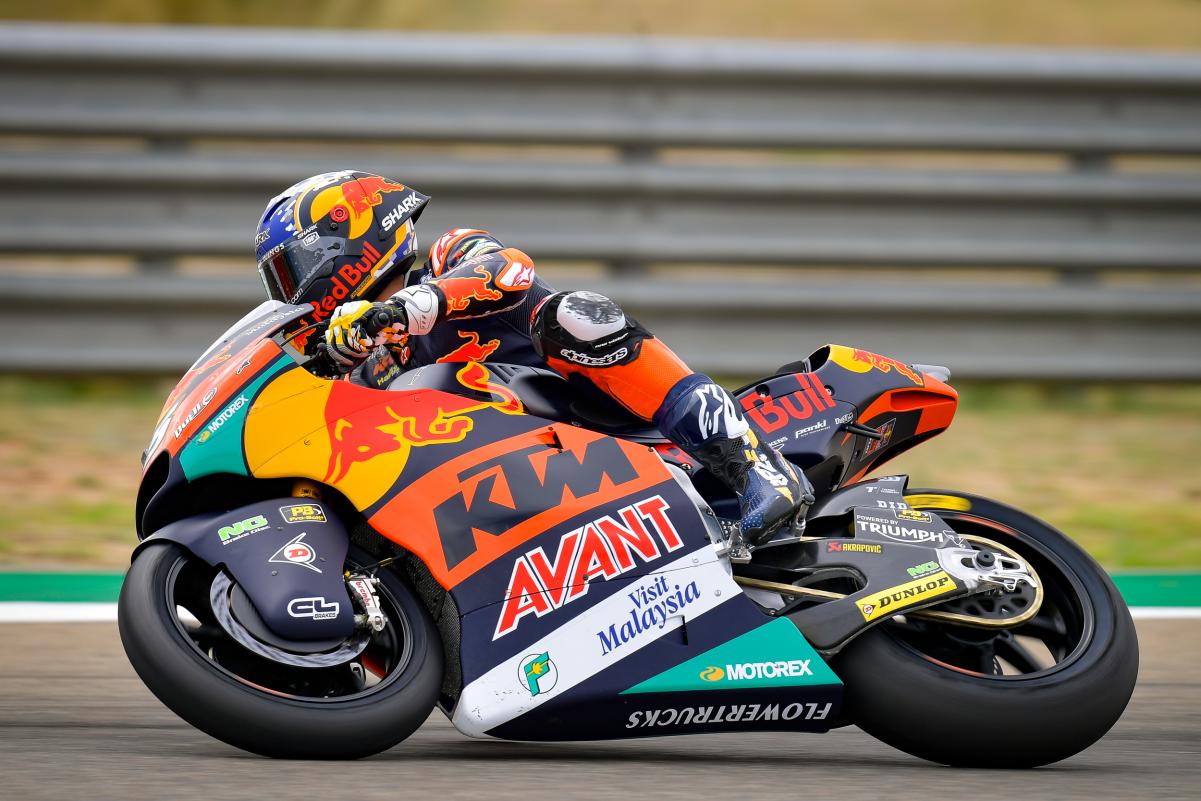 Gardner spent much of the 21-lap race in third position but inherited second when Elf Marc VDS’s Sam Lowes crashed on Lap 13 at MotorLand Aragon.

Fernandez, who only underwent surgery a week earlier following a cycling accident, was already all but out of sight by then and took a sizeable win.

However, Gardner’s result minimised the damage in the championship and he will take a 39-point advantage over his team-mate into the fifth-last round of the season.

Marco Bezzecchi (Sky VR46) is still the KTM Ajo riders’ nearest rival in the standings, but he too hit the deck during the race and is now 72 points or almost three races behind Gardner.

Lowes had qualified on pole and it was an unchanged top three from the grid into the first corner, Gardner second and Fernandez behind him, while Ai Ogura (Idemitsu Jonda Team Asia) emerged from Turn 2 in fourth and Hector Garzo (Flexbox HP40) in fifth.

Fernandez passed Gardner at Turn 12 while Lowes stretched his lead to more than 0.6s by the time they completed the standing lap.

It was back under 0.4s after another lap, before Fernandez passed Lowes for the lead at the start of Lap 4.

Just behind, Gardner reclaimed third spot from Ogura having lost it to the Japanese rider on Lap 3, but then ran wide at Turn 12 and handed it back.

The Australian ceded another position, to Garzo, as they approached Turn 16 on Lap 4, although he sliced back past both the Spaniard and Ogura through Turns 4 and 5 to move back into third on Lap 5.

By then, Fernandez was dropping Lowes, whose advantage over Gardner was over 1.6s and continuing to grow.

Fernandez’s lead went past a full second on Lap 7, and Lowes was soon more than three seconds clear of the third-placed #87 Red Bull KTM Ajo entry.

But for the race leader fatiguing due to injury, Lowes looked set for a comfortable runner-up finish until he crashed on Lap 13 at Turn 7.

That meant that Gardner inherited second spot, albeit six seconds back from his team-mate, but would soon be issued a track limits warning.

Fernandez was at one point more than eight seconds to the good and took the chequered flag 5.4s up on Gardner.

Lowes’ crash meant that it was a vigorous battle for what was the final podium placing, which eventually went the way of his Marc VDS team-mate Augusto Fernandez.

It initially looked like a race in two for fourth position between Jorge Navarro (+Ego Speed Up) and Aron Canet (Kipin Energy Aspar), who were both in the top five by the end of Lap 7.

When Lowes went down, it was a stoush for third position, which they traded back and forth as the contest moved through the halfway mark.

However, Augusto Fernandez was the coming man, passing Canet on Lap 14 and then going after Navarro.

He needed multiple attempts to prise the final podium position away from Navarro from good, which he finally did so less than three laps from home.

Those two were in fact closing in on Gardner despite their dice, but the Sydney native did not look seriously threatened given how many laps remained, and would collect an important 20 championship points.

Bezzecchi eventually retired having initially remounted from his spill, while Garzo also failed to make the finish.

He too crashed at the Reserve Corkscrew, as Navarro overtook him for fifth position on Lap 5.