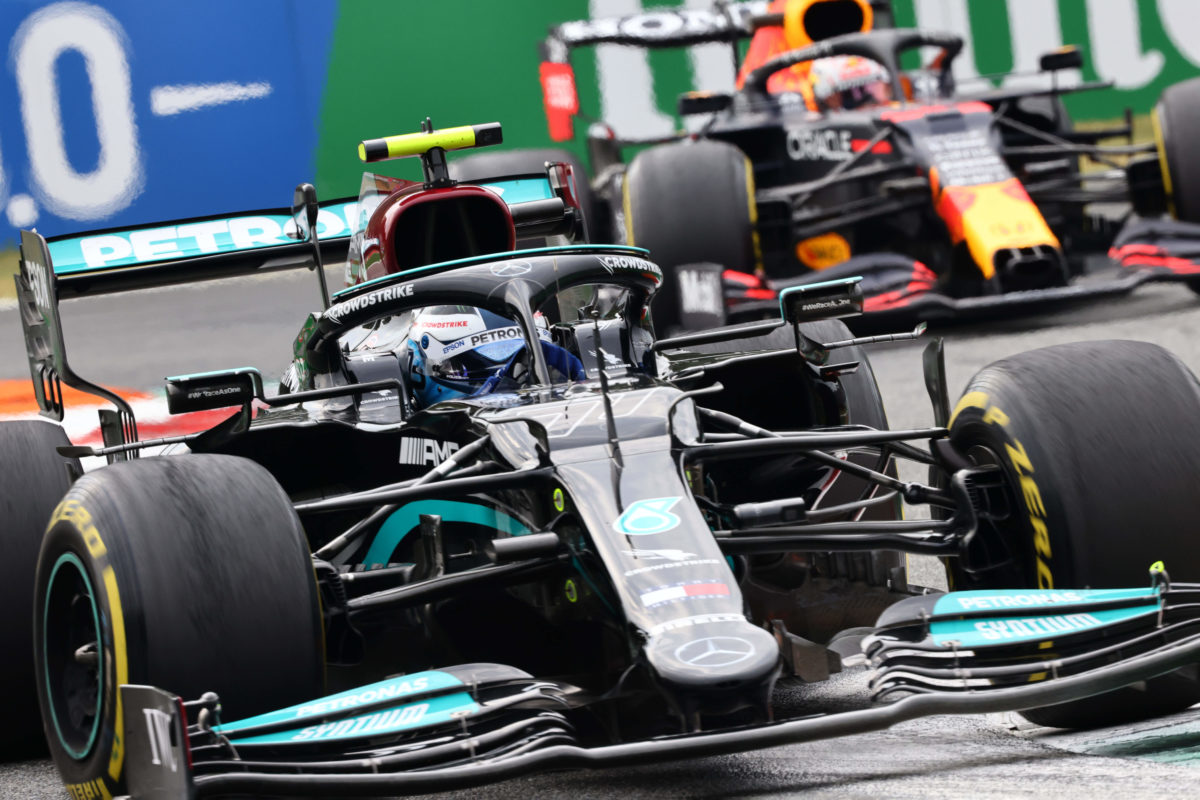 Max Verstappen was second, trailed by Daniel Ricciardo, while Lewis Hamilton slipped to fifth after a poor start.

Hamilton was swamped on the run to the first chicane, Ricciardo and Lando Norris both getting ahead of Mercedes driver.

Pierre Gasly’s session was over at Curva Grande, his front wing sustaining damage at the opening corner before he left the road at the flat-out left-hander.

The Frenchman was able to slow the car and though he made contact with the barrier, it was comparatively light and he was able to climb free uninjured.

AlphaTuari’s session went from bad to worse as Yuki Tsunoda needed a front wing after contact with Robert Kubica at the second chicane.

Predictably, the Safety Car was called for, with Bottas heading Verstappen from Ricciardo, Norris, and Hamilton in fifth.

The 18-lap encounter resumed as the field began Lap 4.

Bottas slowed the pack on approach to Curva Alboreto, accelerating just prior to the final corner to hold a 0.8s advantage as they flashed across the line to resume proceedings.

The Finn stretched his legs out front, opening a 1.6s advantage on what was effectively the first competitive lap, with Ricciardo 1.2s further back in third.

Once DRS was enabled, Hamilton found himself within range of Norris as they squabbled for fourth.

Both McLarens had started on the soft compound tyres, rubber Pirelli predicted would give up after 15 laps.

The leading two cleared off; Bottas holding a 1.9s lead over Verstappen after nine laps, Ricciardo more than five seconds adrift in what was becoming a lonely third place.

Action at the front was stagnant, while in the pack Sergio Perez and Lance Stroll battled over ninth.

The Mexican claimed the place by bouncing over the kerbs at the first chicane on Lap 8, only to be told to hand the spot back.

He duly repeated the move a lap later, making it stick at the second time of asking.

It was arguably the highlight of a largely processional affair that was hardly a sparkling advertisement for Sunday’s race.

Bottas reached the chequered flag with ease from Verstappen, a result which will see the Dutchman on pole given the Mercedes driver will drop to the rear of the grid owing to engine penalties.

Third for Ricciardo will be rewarded with a front-row start for the Italian Grand Prix.

Norris was fourth from Hamilton, then the two Ferraris of Charles Leclerc and Carlos Sainz.

Rounding out the top 10 were Antonio Giovinazzi, Perez, and Stroll.