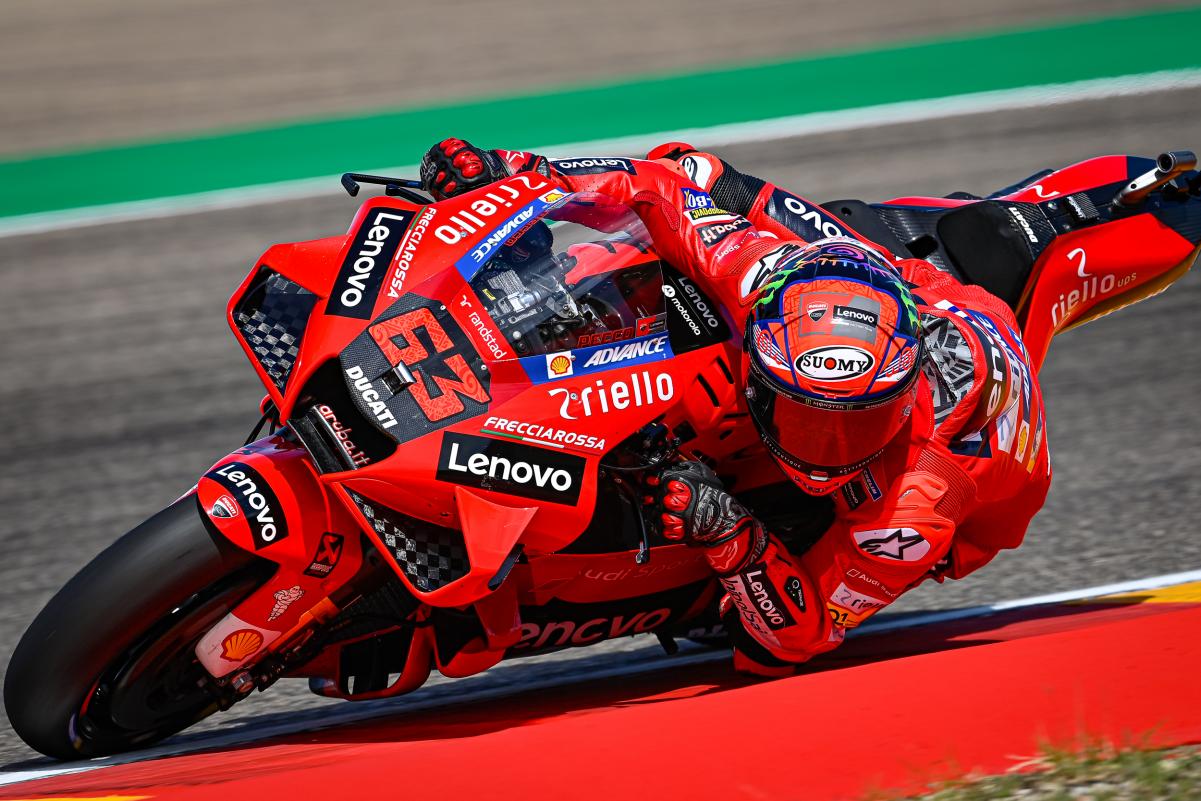 Francesco Bagnaia is now a MotoGP race winner after holding off Marc Marquez in a thrilling end to the Aragon Grand Prix.

Marquez threw everything at the Italian, sending his Repsol Honda down the inside of the #63 Ducati Lenovo Team entry seven times in the final three laps.

However, on none of those occasions could he make the move stick, leaving Bagnaia first to greet the chequered flag after 23 absorbing laps.

Fabio Quartararo continues to lead the championship, but by a reduced, 53-point margin after he struggled to eighth on his Monster Energy Yamaha.

Both of the factory Ducati riders made good starts but when pole-sitter Bagnaia went down the inside of Miller at Turn 1, the latter was held wide and Marquez nabbed second spot.

Bagnaia and Marquez quickly skipped around 0.6s clear of Miller and while the Australian pared some of that back in the opening stages, he soon began to drift back from the #93 Honda.

The gap between second and third went past a second on Lap 9, as Marquez continued to tail Bagnaia, and was more than two seconds on Lap 11.

By then, Aleix Espargaro (Gresini Aprilia) and Joan Mir (Suzuki Ecstar), who had run in fourth and fifth respectively since early on Lap 1, were looming as threats to Miller.

However, #43 made his own mistake that lap at Turn 16, running well wide and gifting a position to each of them, before Mir prised third spot from Espargaro through Turn 4 on Lap 12.

By then, Bagnaia and Marquez were more than three seconds up the road, and Mir could not stem the tide either.

He was more than four seconds behind the two-way battle for the lead after just two laps more, and also could not shake the Aprilia of Espargaro.

With around half a dozen laps remaining, it became apparent that Marquez was going to have a crack at Bagnaia.

He turned that pressure into a dive at Turn 5 on Lap 21, but ran wide on exit and dropped back behind #63.

It was the same story at the Turn 15 left-hander which feeds onto the back straight later that lap, and again at both Turns 5 and 15 on Lap 22.

Marquez then went for a last-lap lunge at Turn 1, another at Turn 5, and one more still at Turn 12, when he ventured beyond track limits and the fight was finally over.

The gap behind third-placed Mir below out in the latter stages although it was still Aleix Espargaro fourth and Miller fifth at the very end.

Enea Bastiani (Avintia Esponsorama Ducati) got the best result of his rookie season to date by finishing sixth, ahead of Brad Binder (Red Bull KTM) and Quartararo.

The latter had identified the Turn 16/Turn 17 sweeper at the end of the back straight as a weakness after qualifying third, and so it was that he often came under attack there.

Iker Lecuona (Tech3 KTM) had been in the battle for sixth until he ran well wide at the Reverse Corkscrew on Lap 17 and eventually got home in 11th.

There were two retirements, both being as a result of early crashes, for Alex Marquez (Castrol LCR Honda) and Jake Dixon (Petronas SRT Yamaha).

Round 14 of MotoGP is the San Marino Grand prix, at Misano, next weekend (September 17-19).