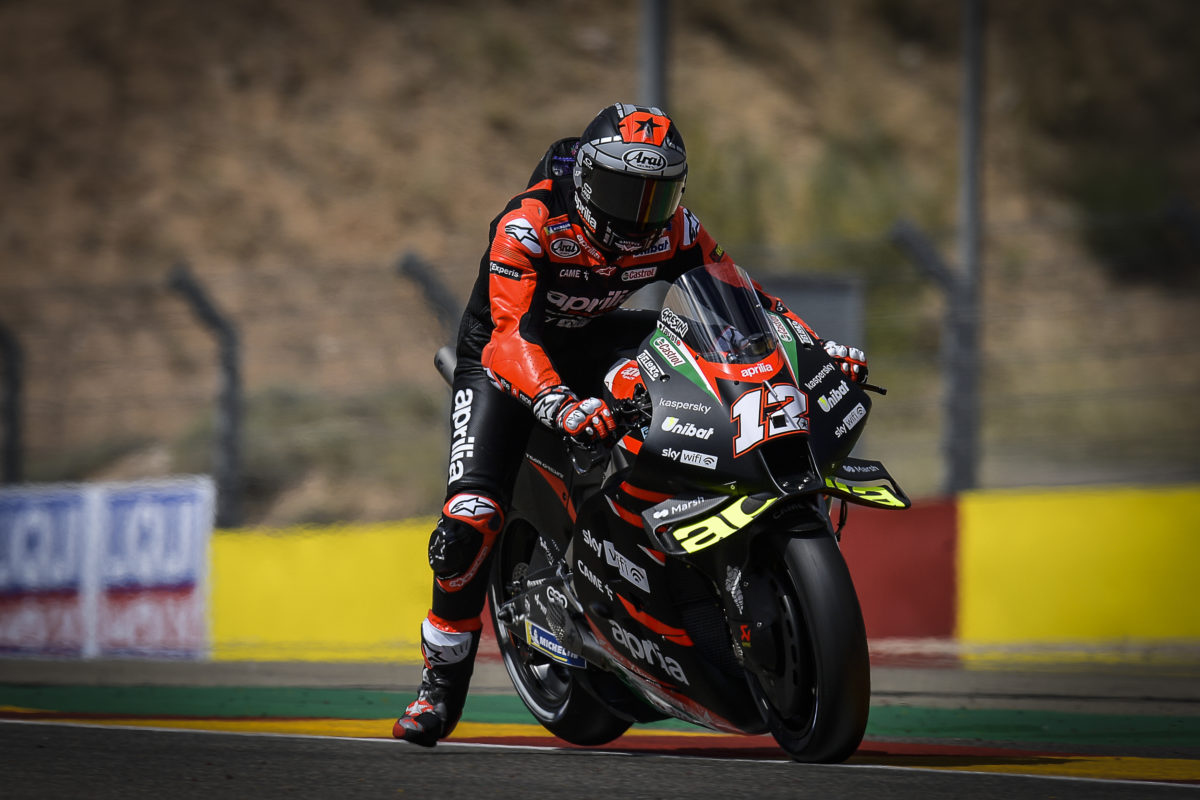 Maverick Viñales predicts he will make another “big jump” in Free Practice 3 at the Aragon MotoGP round after a productive first day with Aprilia.

Viñales is making his competitive debut with the Noale manufacturer off the back of just two days of testing on an RS-GP, at the start of the month at Misano.

While the ex-Yamaha rider was 19th-fastest in both Friday practice sessions at Aragon and 20th on combined times, he was satisfied with his efforts.

“For me, it has been very positive because from FP1 to FP2 we make a big jump not only with the lap time but also with the feeling and I think tomorrow we will make another.

“It is true that it is very different [to the Yamaha] so the way I do the track is on another way.

“It is hard to still continue doing it in the way the bike wants because I’m used to a different way and that’s why I could not combine all the sectors in a perfect way.”

To Viñales’ point, his fastest split in each of the four sectors came in as many different laps.

For reference, team-mate Aleix Espargaro clocked a personal best of 1:47.886s which put him behind only the Ducati Lenovo Team’s Jack Miller on the timesheet.

Viñales had admitted after his Misano test that he needed to work on how he brakes an Aprilia, and that was also a theme after his first day at a race event.

The nine-time MotoGP race winner says he is still using the set-up of Espargaro, who he happened to follow during Friday practice, and explained that he is still lacking “trust” in the front end of the RS-GP.

“We didn’t make any special plan with Aleix, it was more to see the lines he does and they are completely different to the lines I was used to doing,” recalled Viñales.

“I am still braking too early, that is the main issue because I was used to a different kind of riding style but we are getting much closer. In Misano, I was getting closer and here by the days and the practices we will get closer.

“For me, the most difficult part is the braking because the acceleration is very good and I can control well the slide. It is not an issue but I need to get used to the braking area because it is different to what I used to ride and makes a difference to the lap time.

“I think we will arrive. It is about doing laps and trusting the front more than anything else.”