Miller impressed with rideability of Ducati at Aragon

Miller impressed with rideability of Ducati at Aragon 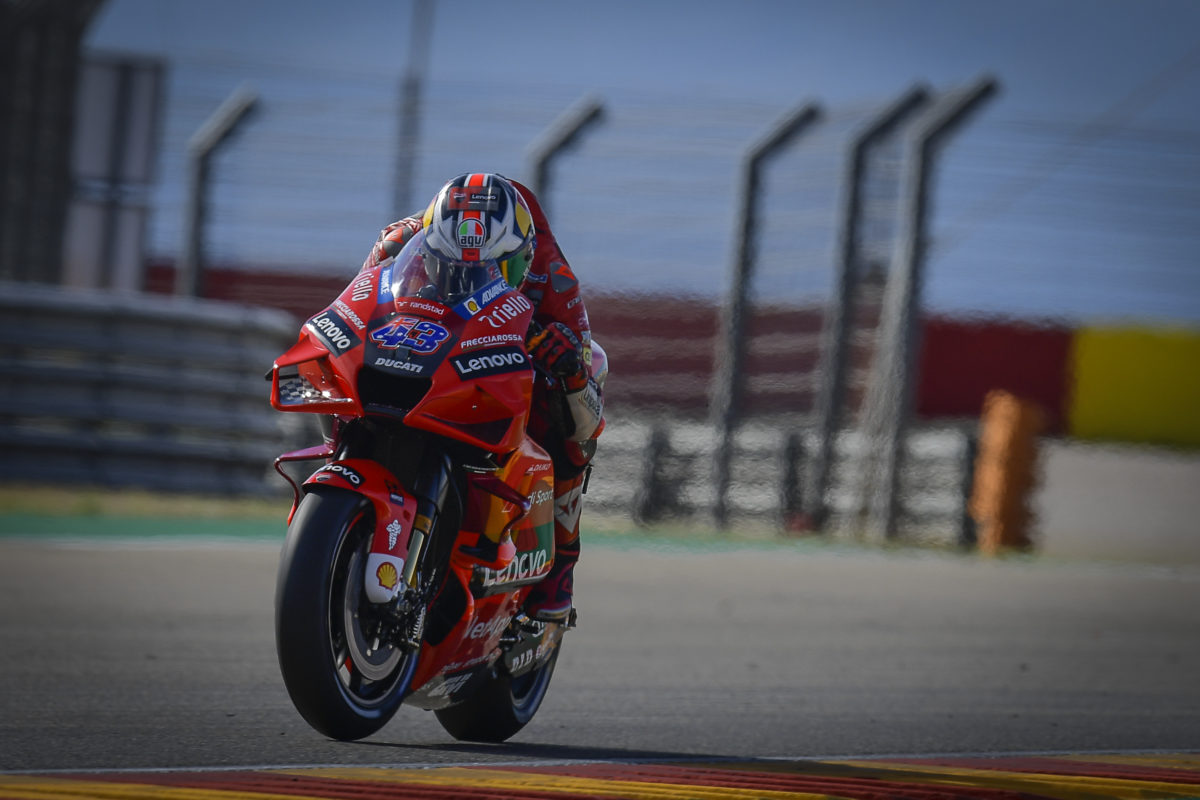 Jack Miller was left impressed with the rideability of his Ducati after topping Friday practice at MotoGP’s Aragon Grand Prix.

The Queenslander clocked a 1:47.613s in the final four minutes of Free Practice 2 at MotorLand Aragon which vaulted him from 16th at that point to first, and he finished the day almost three tenths of a second up on the field.

Miller found the track to be high-grip despite rain the night before, with this year’s event taking place more than a month closer to the northern summer than the two last year at the Alcañiz circuit.

However, he drew particular attention to how he was able to ride his Desmosedici around the double-left at the end of the back straight.

“As soon as I rolled out of pit lane, I was pleasantly surprised,” said Miller.

“The grip was there immediately; we were able to push from the get-go.

“It’s a lot nicer riding here in these temperatures than what we had last year and, no, just enjoying it.

“The bike – like I said to the boys in the debrief – especially in the last two corners with the double apex, you can pick up the gas and let’s say in the past we had to manage it quite a lot.

“Now, we can be sort of a nice consistent gas the whole way through and it will keep turning, and it’s not rolling off the edge of the tyre, so it’s definitely more pleasant to ride around here.”

Miller’s late FP2 flyer came with new soft Michelin tyres on the front and rear of his factory-entered Ducati.

Miller did, however, try all three compounds on the rear of #43 over the course of Friday practice, and said, “The tyres are working really well, over distance as well.”

It was a good day for the Bologna marque broadly, with all four of its contracted riders in the top six on their Desmosedici GP21s.

Pramac Racing duo Johann Zarco and Jorge Martin were fourth and fifth respectively on a 1:47.988s and 1:48.023s, while Francesco Bagnaia took sixth with a 1:48.032s on the other Ducati Lenovo Team entry.

The latter had an early spill in FP2, but was happy with his output overall.

“I’m pleased with the result obtained on this first day at the MotorLand Aragon,” said Bagnaia.

“Last year, we Ducati riders struggled a lot on this track, but today we were able to be fast right from the start, which shows that we did a great job on our Desmosedici GP.

“We already have a good base set-up, and in the two sessions today, we tried different tyres, except the hard front, and we were able to be competitive with all of them.

“I’m satisfied with the work done on this first day, and I’m confident that we can do well also in qualifying tomorrow.”