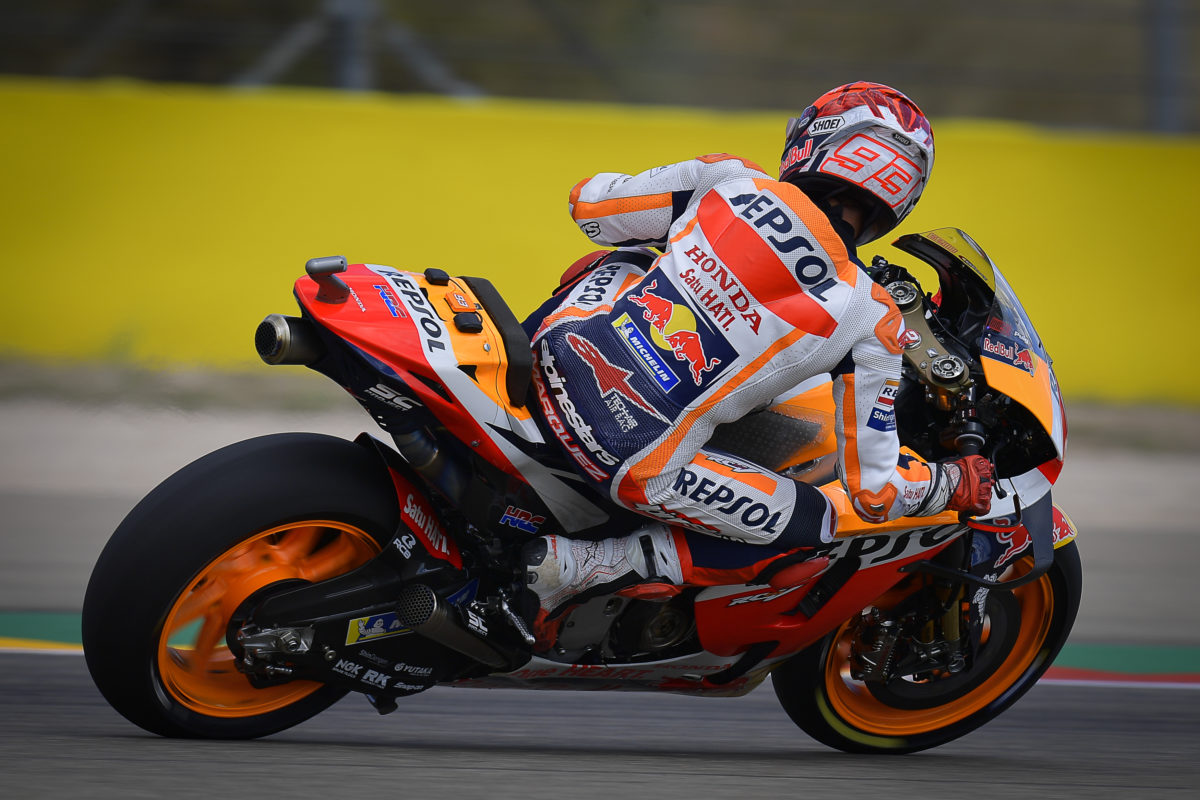 Marc Marquez has explained why a crash in practice for the Aragon MotoGP round angered him so much.

Marquez hit the deck less than 10 minutes into Free Practice 2 at MotorLand Aragon when he had to react to the slipstream he got off brother Alex’s Castrol LCR Honda.

The Repsol Honda rider found himself with too much closing speed at the end of the back straight and when he ran wide to avoid contact, the dirty track surface caught him out.

He was quickly to his feet, which he used to kick the air as he stormed back towards an RC213V and its seat unit which was barely still attached.

Marquez had set the pace in Free Practice 1 with a 1:48.048s and would be the only rider who did not improve in the second, 45-minute session, leaving him eighth on combined times.

His frustration at a crash when he “felt under control” was compounded by the fact that it deprived him an opportunity for race simulations on the soft compound Michelin tyre.

“The day, I’m happy, [but] it’s true that the plan was changed a little bit because of the crash,” explained the six-time premier class champion.

“The plan was to use the soft tyre in the first, second runs just to understand for the race distance.

“[The crash] changed a little bit the plan, but on the other hand we tried the hard rear tyre, so it changed the plan for this afternoon but didn’t change the plan for the race weekend because we already understood a few things.

“It’s true that after the crash I was angry because I felt under control.

“I went wide, and I said ‘OK, give up’ because it’s free practice.

“But when I go onto the dirty place, I lost the front and I was just angry for that, because then I know with that crash, I didn’t follow the correct plan and because it was a situation that I felt under control but just I lost the front where I didn’t expect.”

Aragon is just the second anti-clockwise track of the season and Marquez’s only podium for the year to date is a win at the other, namely Germany’s Sachsenring.

That was he was at the top of the timesheet after the opening session, at a circuit when he has won in all of his four previous starts, therefore came as no great surprise.

Furthermore, while the Spaniard’s best lap in FP2 was a 1:48.827s at the end of a run which started on new hard tyres front and rear, he subsequently logged a 1:48.870s on a well-used hard-medium combination.

However, he is still suffering the effects of last year’s broken humerus through the right side of his body, and remains wary of the physical toll of the race weekend despite facing mostly left-hand corner.

“It’s true that in this track, I feel not so bad,” noted Marquez.

“Just, I push single laps today because I don’t want to stress too much that shoulder, but in the race pace, when I push, the lap time comes, so this is important for Sunday.”

Jack Miller is fastest for the Ducati Lenovo Team after two practice sessions so far, with the next coming tonight at 17:55 AEST.