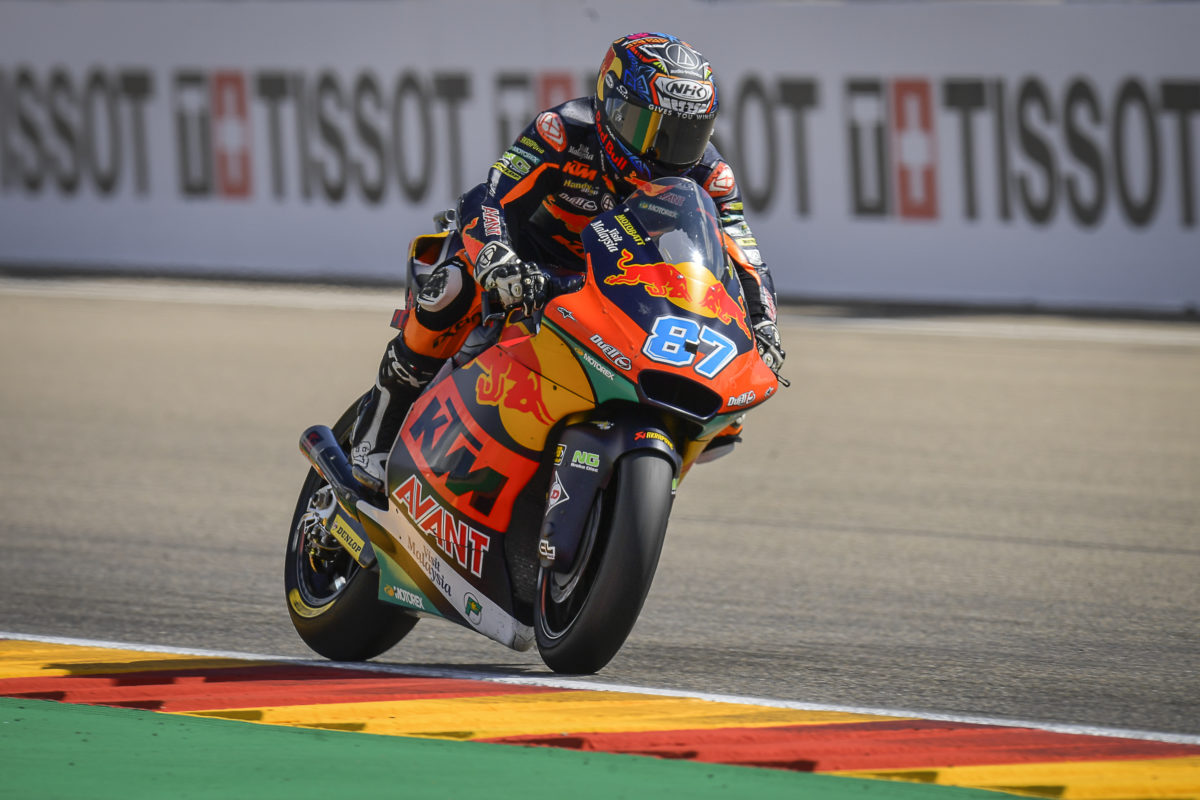 Gardner hit the top of the timing screen for the first time courtesy of a 1:52.743s with just under 10 minutes remaining in Free Practice 2 at MotorLand Aragon.

That effort put the championship leader just seven thousandths of a second ahead of previous fast man Augusto Fernandez, who will move from Elf Marc VDS to KTM Ajo in the off-season.

No one else bettered them, although Raul Fernandez subsequently improved to a 1:52.845s, with Federal Oil Gresini’s Fabio Di Giannantonio ending up only 0.105s off the pace in fourth.

Raul Fernandez arrived at Round 13 of the season under an injury cloud, having undergone surgery on the hand which he broke in a cycling accident a week earlier.

The 20-year-old from Madrid only notched up 10 laps in each session so far at Aragon, significantly less than any other rider had done, but indicated that he should be able to race this weekend.

“Overall, it was a positive day,” said Fernandez, who is second in championship.

“The most important thing on Friday was to see how my hand was, since it has been very few days since the operation.

“We needed to see how we felt on the bike, to find out if we were ready to endure Sunday’s race.

“That was our goal for today, and now that we have overcome it, tomorrow we will try to qualify well in order to be able to fight on Sunday in the contest.”

“MotorLand Aragon is a track that I usually find hard, but the important thing is that we improved the bike between Free Practice 1 and Free Practice 2.

“We finished first, but we have to keep pushing to continue taking steps forward tomorrow morning [Free Practice 3].

“I’m happy and I want to thank the team for all the work they did.”

Gardner makes for two Australians on top after the opening day, with Jack Miller having set the pace in MotoGP.

FP3 for the premier class starts at 17:55 AEST, followed by the corresponding session for the intermediate class at 18:55.