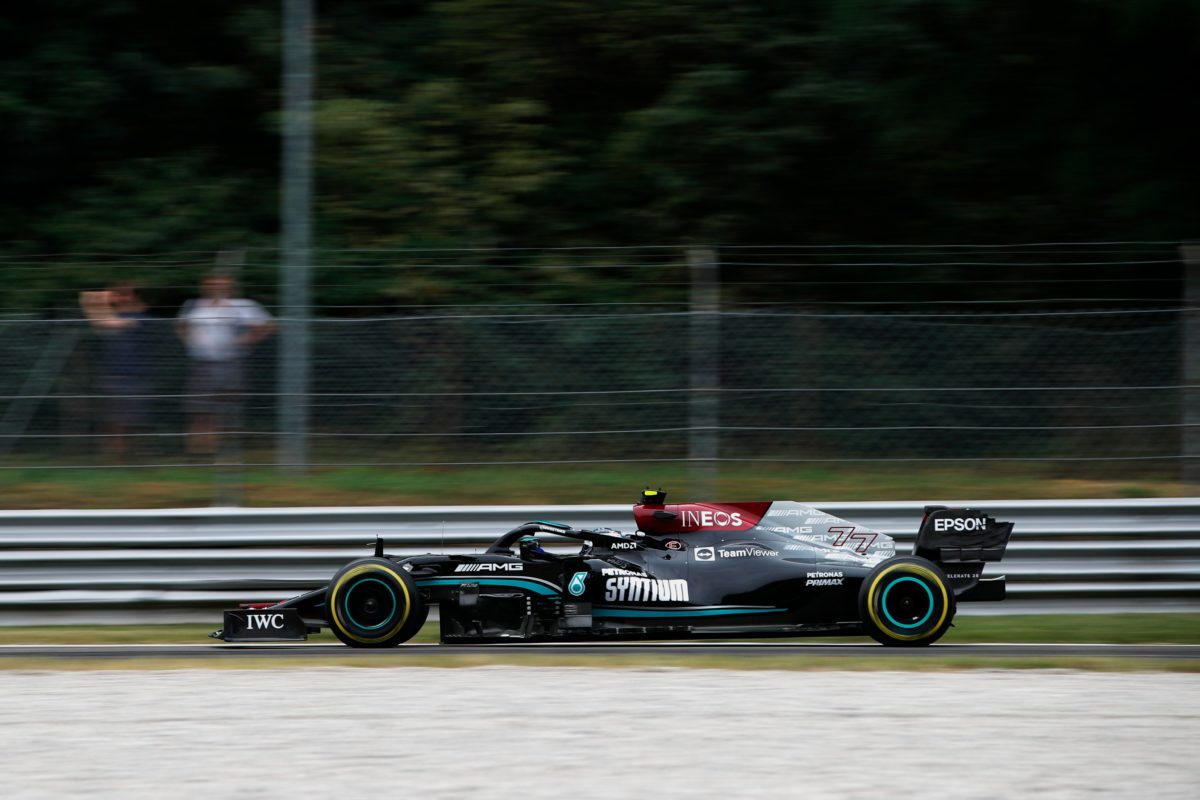 A blistering lap from the Finn saw him rocket to the top with his final lap despite towing Lewis Hamilton to the line.

Max Verstappen secured third in a case of damage limitation for the Red Bull driver who just didn’t have the pace of the two Mercedes.

Ferrari’s Carlos Sainz enjoyed the benefit of a tow on his first timed lap to record a 1:22.495s to open the session with the fastest time.

Hamilton’s first effort was a flyer, a 1:20.542s to easily post the fastest time of the session.

That was supported by team-mate Bottas, who crossed the beam seconds before Hamilton’s lap at 1:20.804s.

Third best was Daniel Ricciardo, the Australian posting a 1:21.292s at the first time of asking.

Verstappen’s initial lap featured a mistake at the second chicane, the Dutchman dropping a wheel into the gravel on corner exit after picking up some mid-corner oversteer.

His second lap then had to be aborted when the Red Bull driver encountered a freight train of cars on approach to the second chicane.

Esteban Ocon encountered the same traffic jam seconds later but was able to scythe his way through unhindered.

Pierre Gasly had a lap ruined when he encountered Charles Leclerc on the apex as he turned into Variante Ascari.

With a minute of Qualifying 1 remaining, another traffic jam formed on approach to the Parabolica – 13 of the 20 cars on track.

It somehow worked out without incident, those missing the cut were Nicholas Latifi, Yuki Tsunoda, Mick Schumacher, Robert Kubica, and Nikita Mazepin.

George Russell had initially been eliminated, before Tsunoda had his best lap deleted for track limits at the Parabolica, dropping him into the bottom five and out of the session.

Stewards noted a number of incidents during the segment, including one between Kubica and Mazepin, and another between Leclerc and the Russian.

No investigation was needed on the latter, with the former to be investigated post-session.

A busy pit lane in the final minutes of the session saw near contact between Sebastian Vettel and Hamilton.

The Aston Martin was sent out into the path of the Mercedes, narrowly avoiding an Alpine mechanic in the process.

Frustrated as he exited the lane, Verstappen blazed by four cars as he joined the track, just two minutes remaining in the session as he did so.

Making it through into Qualifying 3 for the second time in as many weeks was Antonio Giovinazzi, the Alfa Romeo Sauber driver the fastest Ferrari-powered car in the session.

As the final segment of the session began, nine of the 10 remaining runners headed out – Giovinazzi the only one to remain in the garage.

Verstappen was in the wheel tracks of Perez, who in turn followed Pierre Gasly, the Red Bulls looking to use the slipstream in the former’s favour.

The Finn was further demoted by Verstappen and both McLarens, Norris ahead of Ricciardo to leave the Mercedes just fifth.

With two minutes remaining, all 10 runners headed out on track, Giovinazzi for his first lap in the segment.

The two Red Bulls were at the head of the train, Perez leading Verstappen while at the other end of the field Norris trailed the two Mercedes.

Verstappen wasn’t able to improve, the Dutchman remaining second provisionally before dropping to third when Bottas shot to the top with a 1:19.555s.

An improved final lap saw Ricciardo leap ahead of Norris, only for his team-mate to reverse the order once again, the difference between the two McLarens just 0.02s.