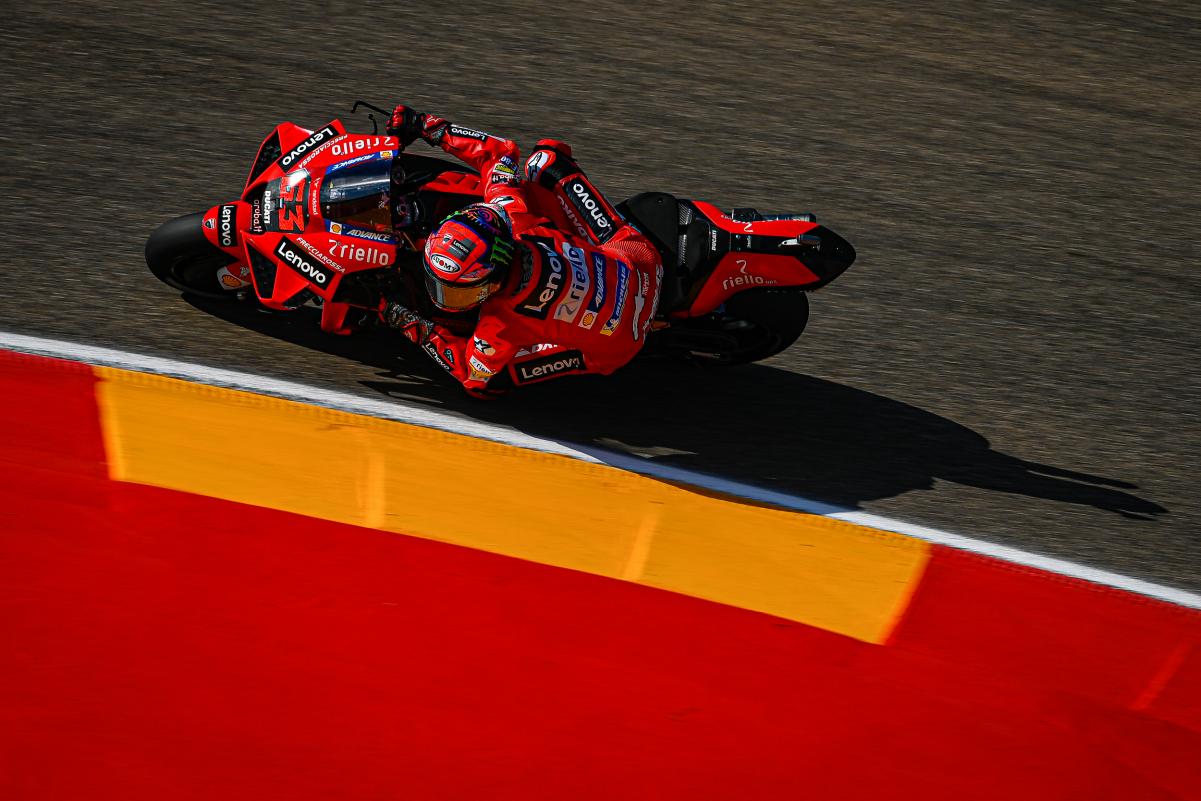 Factory Ducati team-mates Francesco Bagnaia and Jack Miller have qualified first and second respectively for the Aragon MotoGP round.

Bagnaia smashed the all time lap record at MotorLand Aragon in setting a 1:46.322s while Miller stole the middle slot on the front row from Fabio Quartararo with a late 1:46.688s.

Jorge Martin (Pramac Ducati) moved the marker to a 1:46.878s on his second flyer but he was second to Quartararo at the end of the first runs after the championship leader nailed a 1:46.727s.

When the second runs began, Bagnaia made an early impact by blitzing the existing all time lap record of 1:46.635s.

At that point, however, Quartararo still looked a threat as he went quicker to the first sector before losing time in the second and then running long at Turn 12 anyway.

Marc Marquez jumped back onto the provisional front row with a 1:46.736s just before the chequered flag, while Quartararo was still chasing pole.

The Frenchman set a new personal best of 1:46.719s but it would not even be good enough to hold onto second position in the end, as Miller advanced from fifth on his final lap.

The Queenslander thus knocked Marc Marquez onto the second row, which the six-time premier class champion will share with Martin and Aleix Espargaro (Gresini Aprilia).

Earlier in Q1, it was Zarco who dominated, amid disaster for Alex Rins.

The former was almost four tenths up on the field at the end of the first runs courtesy of a 1:47.327s and progressed to a 1:47.293s just before the chequered flag.

Binder got through with a time 0.051s away from Zarco’s best, consigning Iker Lecuona (Tech3 KTM) to 13th, Alex Marquez (Castrol LCR Honda) to 14th, and Cal Crutchlow (#35 Monster Energy Yamaha) to 15th.

Row 7 is full of notables, with Maverick Viñales qualifying 19th for Gresini Aprilia at the first time of asking, Suzuki Ecstar’s Rins only managing 20th, and Valentino Rossi taking 21st.