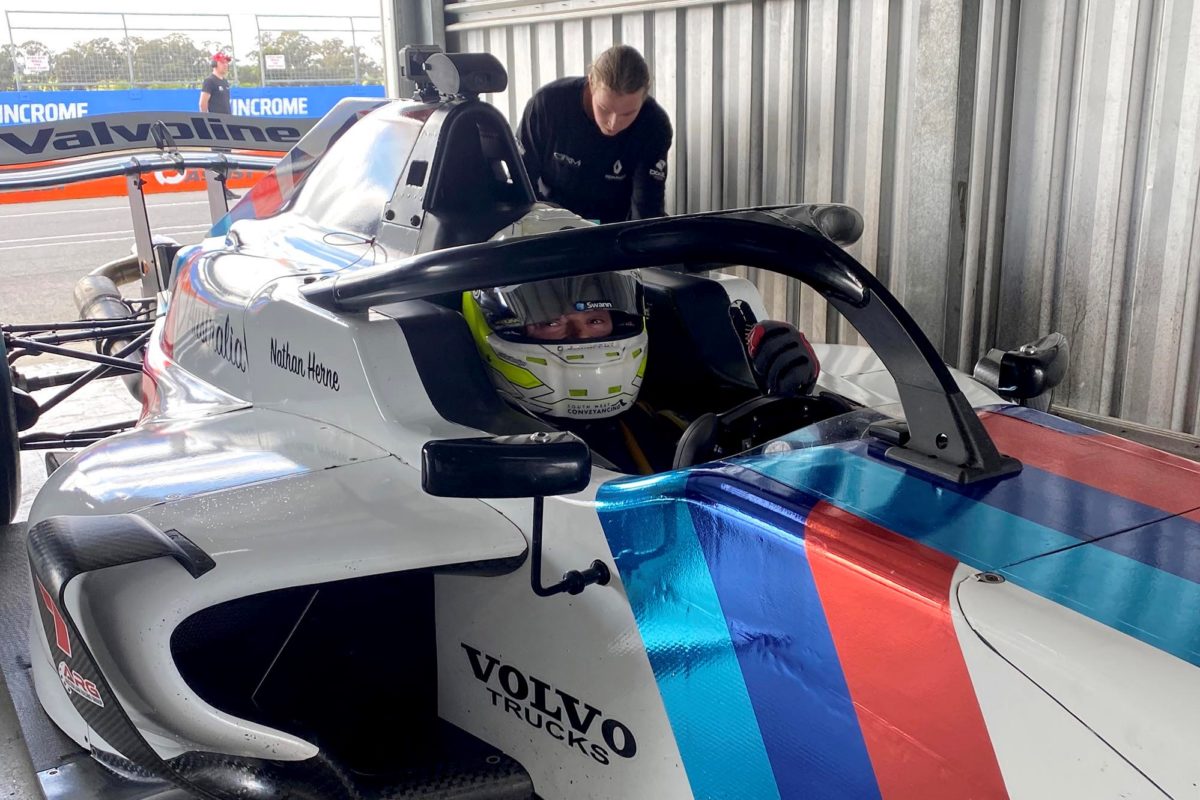 James Moffat has driven an S5000 for the first time, in a test day at Winton.

The Supercheap Auto TCR Australia full-timer got behind the wheel of Garry Rogers Motorsport stablemate Nathan Herne’s car in what was his first drive of an open-wheeler in almost 14 years.

Moffat was Herne’s mentor for this year’s S5000 Australian Drivers’ Championship, and said of the wings-and-slicks V8, “It’s a very cool car to drive.

“For me, it has certainly been a long time between drinks in regards to driving an open-wheeler. It was back in 2007 when I last drove Formula Ford, so it has been a while.

“Up until now, there hasn’t been the opportunity to drive one. Garry [Rogers, team owner] had always said that he’d like me to do it, and about mid-morning, Gaz came up to me and said, ‘It’s about time you jumped in one of these.’

“It hadn’t been on my radar to do it, but I’m really glad that I got the opportunity.

“I’ve seen first-hand what’s gone into building all the cars at GRM, so it was nice to finally get the chance to experience it.”

While Winton’s tight confines do not allow an S5000 to really stretch its legs, Moffat was able to get a good feel for the driving task.

“I was able to squeeze into Nathan’s seat insert, the belts fit me and away we went,” he recounted.

“Of course, Winton is not a circuit like Phillip Island or Sydney Motorsport Park, but it was certainly enough of an experience to get an impression of what they are like to drive, the horsepower and how much you have to muscle the cars and how brutal they are.

“I can really appreciate now more what these guys are dealing with.

“It was nice to tick the box and know more about what they are like to drive.”

Moffat expects the outing will be beneficial if he is to mentor an S5000 driver, Herne included, again in future.

“It is good to understand more what he is talking about and what he is going through out on the track,” said Moffat.

“If I continue in that sort of role with him, or any S5000 driver, then this drive will be beneficial.

“I now know more about them, and they are cool to drive. It was really nice to tick the box and I’m very thankful to GRM for the opportunity.”

Herne finished sixth in the 2021 S5000 Australian Drivers’ Championship and is currently second, behind Aaron Seton, in the National Trans Am Series.

Moffat’s regular ride is a Renault Megane TCR, while he is also slated to make his National Trans Am debut in a Mustang-bodied car adorned in colours made famous by his father Allan.

As it stands, those series are next in action at The Bend on October 15-17.