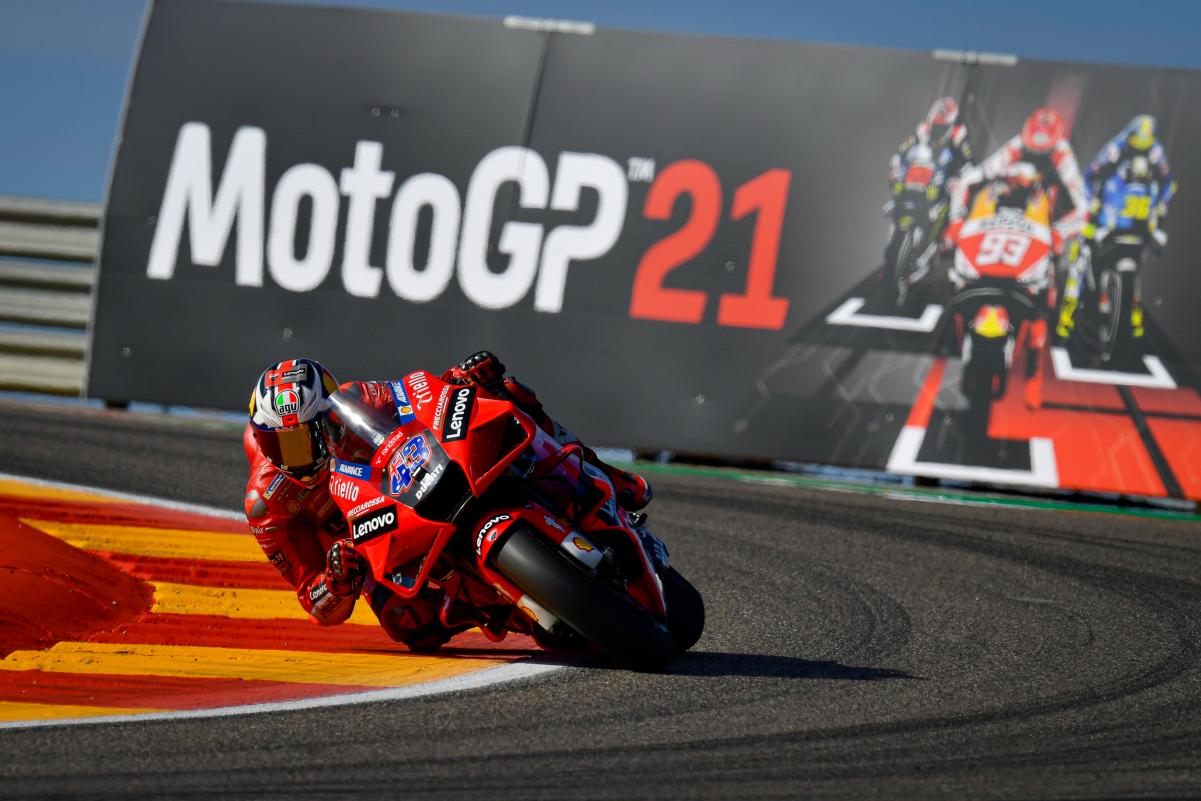 The Queenslander rode his factory Ducati Lenovo Team entry to a 1:47.613s in the final four minutes of Free Practice 2 at MotorLand Aragon, with Aprilia Gresini’s Aleix Espargaro ending up second on a 1:47.886s.

Cal Crutchlow wound up third-quickest in just his second event for Monster Energy Yamaha with a 1:47.897s, ahead of Pramac Ducati team-mates Johann Zarco on a 1:47.988s and Jorge Martin on a 1:48.023s.

Miller was well outside the top 10 cut-off for direct passage to Qualifying 2 when he went onto the circuit with brand-new soft tyres on the front and rear of the #43 Desmosedici for his final run.

He was thus the first to beat Marc Marquez’s Free Practice 1 benchmark of 1:48.048s, which left the Repsol Honda rider eighth on the combined timesheet given he did not improve in the latter of the day’s two 45-minute sessions.

Marquez had crashed less than 10 minutes into FP2 when he got caught out by a slipstream off brother Alex’s Castrol LCR Honda.

The six-time premier class champion had to go off-line to avoid clouting #73 at the end of the back straight and the ensuing spill left him visibly angry.

Marc Marquez returned on his second bike, believed to be the older of the two Honda chassis at his disposal this weekend, and eventually went as quick as a 1:48.827s, on hard tyres.

Championship leader Fabio Quartararo also had his troubles, with it appearing that he may have been bitten under his helmet by an insect in the final minutes of FP2.

Nevertheless, the Monster Energy Yamaha rider did enough for seventh with a 1:48.034s, just shy of the 1:48.032s which left the Ducati Lenovo Team’s Francesco Bagnaia sixth.

The latter was another who hit the deck in FP2, losing the front of his Desmosedici through Turn 5 in the 13th minute of the session.

Ninth on combined times after a total of 90 minutes was Takaaki Nakagami (Idemitsu LCR Honda) on a 1:48.057s, with Enea Bastianini (Avintia Esponsorama Ducati) last of those provisionally into Q2 thanks to a 1:48.086s.

Maverick Viñales ended his first day of practice on an Aprilia in 20th position on a 1:48.755s.