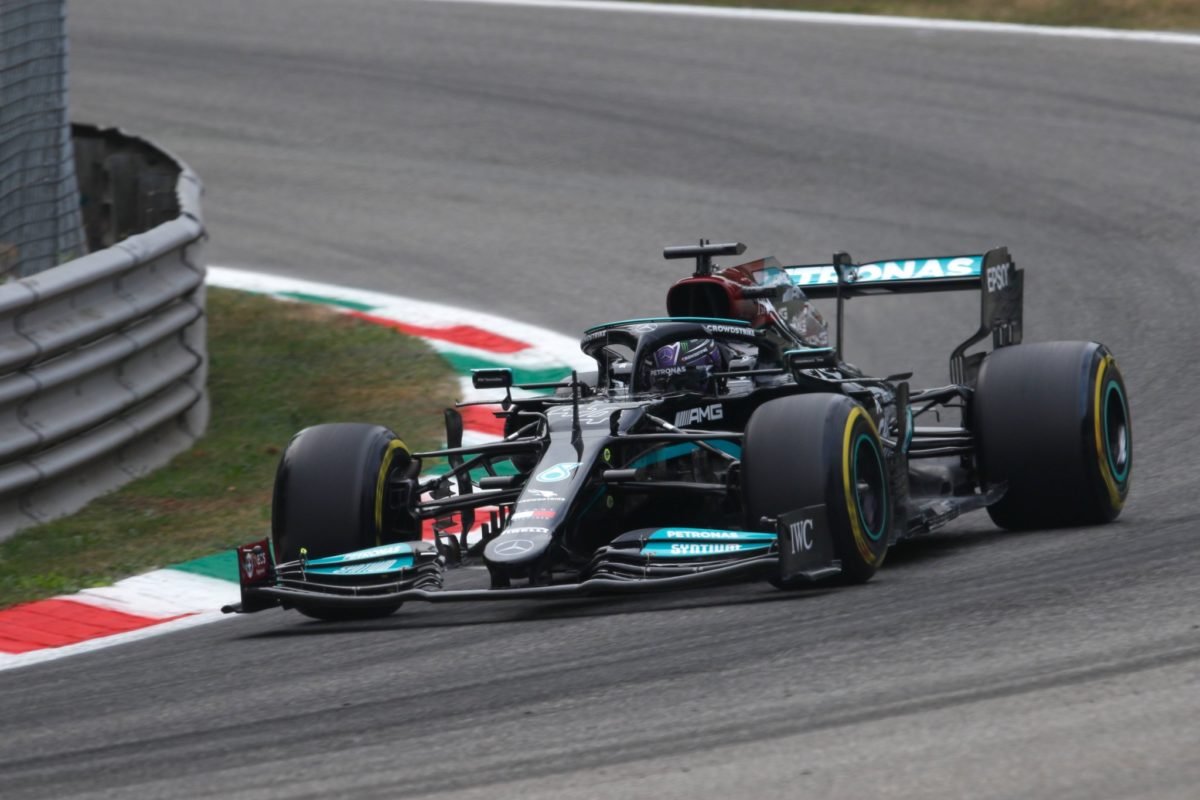 Lewis Hamilton has topped the only practice session ahead of qualifying for the Formula 1 Italian Grand Prix.

The Brit was fastest from Max Verstappen in a session which suggested McLaren could prove a factor later in the weekend.

With just 60-minutes available to teams ahead of qualifying this afternoon, it was a busy start to the session with 19 drivers heading out proceedings commenced.

The exception was George Russell, who remained in the pits during the initial moments before he finally took to the circuit after four minutes.

Lando Norris and Verstappen both missed the apex at Turn 1, taking to the escape road before rejoining the circuit.

The early pace setter was Hamilton, a 1:22.262s recorded on a set of yellow-walled medium tyres.

A mix of approaches saw Sergio Perez also on the medium rubber, while his Red Bull team-mate had the hard compound Pirellis fitted.

Verstappen was third best, a second down on Hamilton’s best.

The McLaren driver had reported a soft brake pedal as the session began, though that had been resolved following the opening minutes.

A 1:22.127s from Perez saw him move to the top of the timesheets, a new set of medium tyres bolted on to his Red Bull.

It was an improvement of 0.135s over Hamilton’s previous marker, and 0.444s ahead of Verstappen.

Falling victim of track limits at the Parabolica were Mick Schumacher and Charles Leclerc, the former making the transgression twice, before Fernando Alonso suffered the same fate.

With 25 minutes to run, Daniel Ricciardo moved to the top of the timesheets with a 1:22.003s on a set of the medium tyres.

Soon after, Pierre Gasly went second fastest on a 1:22.028s, 0.025s away from Ricciardo’s best as times slowly began to tumble.

Alonso continued to push the envelope at the Parabolica, losing a second lap for the second time with 33 minutes run.

In the final 20 minutes, attention switched to soft tyre running ahead of qualifying later in the day.

Perez was the first to record a lap, banking a 1:22.039s, which was slower than Gasly’s best on the mediums to sit third.

Also using a set of mediums, Valtteri Bottas recorded a 1:21.451s to go fastest, his tenure at the top brief as Verstappen logged a 1:21.378s on the soft tyres.

A wild lap for Hamilton saw the Mercedes driver go faster still with a 1:20.926s, aided by a tow on approach to the Parabolica.

It was a time set on the medium compound tyre, the Brit 0.452s clear of the pack.

The qualifying simulations saw the Aston Martins of Lance Stroll improve to fourth and Sebastian Vettel to sixth, Ricciardo’s earlier lap seeing him slide to only eight fastest inside the final 10 minutes.

Traffic proved an issue in the latter stages, Esteban Ocon baulked through the Variante Ascari as he came across both Alonso and Hamilton.

Another run from McLaren saw Ricciardo rise to fifth, towing Norris to a 1:21.202s to move up to second best.

The times didn’t stand, both deleted for track limits, the pair falling foul at the Parabolica.

When the chequered flag was out, Hamilton ended proceedings fastest from Hamilton, Verstappen and Bottas.

Ricciardo was classified ninth with Norris 12th, the McLaren pair having shown greater performance than those results suggested.

Qualifying follows, the three-part session to commence at 02:00 AEST.