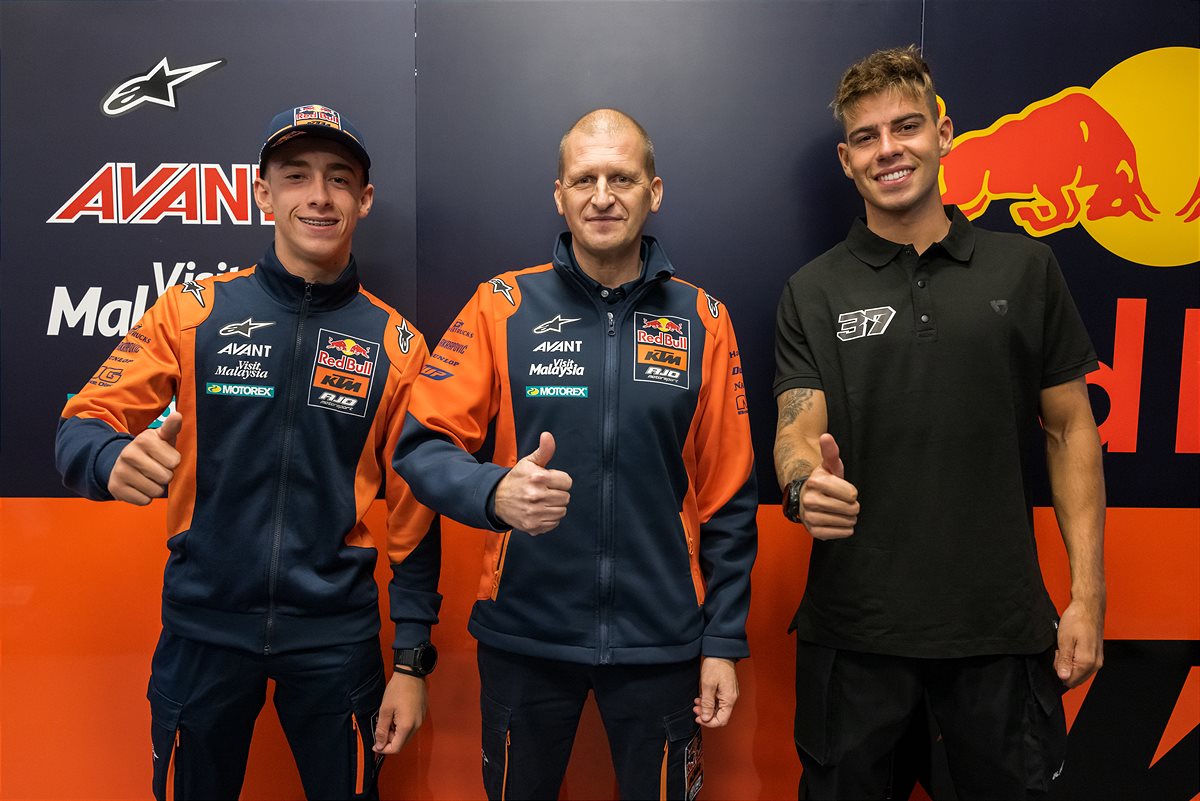 Pedro Acosta’s move up to Red Bull KTM Ajo’s Moto2 team in 2022 has been confirmed, as he seeks to seal the Moto3 title in his rookie season.

The 17-year-old and fellow Spaniard Augusto Fernandez have been named as the team’s two riders in the intermediate class next year, the latter shifting across from Marc VDS.

Acosta won the 2020 Red Bull MotoGP Rookies Cup and has been the breakout star of Moto3 in 2021, scoring five wins and a second placing with KTM Ajo from the 12 races held to date.

He and Augusto Fernandez fill the seats which are being vacated by Remy Gardner and Raul Fernandez, both of whom are also staying within the KTM structure as they progress to Tech3’s MotoGP team.

Acosta is pleased to also be moving through the Austrian marque’s well-regarded talent ladder, saying, “Jumping to Moto2 was my goal because I believe it’s the step I need to make.

“Of course, there is always more to learn – and I could do that in Moto3 – but when it comes to details and my development as a rider then it feels like the right move.

“It’s a big advantage to stay in the Red Bull KTM Ajo team as we now have a year of working together and it’s always important to keep a good and positive feeling with the people around you.

Fernandez currently sits sixth in the Moto2 championship, with three podiums so far this season at Marc VDS, and also boasts three intermediate class race wins in his career.

“The team has been a reference in the category now for many years by winning races and fighting for championships.

“I think that experience of going for titles will really help me next year and I’m already looking forward to working with them.”

“Together with Red Bull KTM Ajo we have the best possible structure to support both riders in their next challenge.

“Aki Ajo [team owner] and his team have played a fundamental role in the careers of many riders and we can be proud to have him by our side for the next project in rider development.

“It is a great pleasure to support Pedro’s desire to move up from Moto3 to the next category.

“What he has shown in his first World Championship season is outstanding and we believe he can keep the momentum going.

“He will continue to focus on his goal for 2021, but we will then tackle the next challenge together.

“With Augusto we welcome another promising talent to our Red Bull KTM family. He has shown great signs and we are happy to have an experienced Moto2 rider in our line-up.

“I am sure that under Aki’s guidance he can make the next level in performance and we will celebrate some exciting results in the near future.”

Ajo hopes his new Moto2 riders will emulate what Gardner and Raul Fernandez, who sit first and second respectively in the title race, have achieved so far.

“We’ve had a very strong season in Moto2 with Remy and Raul and there are still a few races to go but looking to 2022 we are very happy to have another couple of great riders with Pedro and Augusto and a promising combination of experience and youth,” he said.

“We have known Augusto for some time and have seen his career and results. He has shown big potential and I think we can achieve great things together.

“Pedro’s rookie year in Moto3 has been something special and even more is coming.

“The step to Moto2 after just one season in Moto3 is a big one but if there is one racer that can make this step then it’s Pedro. We have a lot of trust in him and will, of course, fully support him.

“Together with Red Bull and KTM I am confident we have selected the right riders for our KTM GP Academy for the future.”

KTM’s announcement follows recent word from Marc VDS that it will field Tony Arbolino in Moto2 next year, the Italian to shift across after his rookie season with Intact GP.