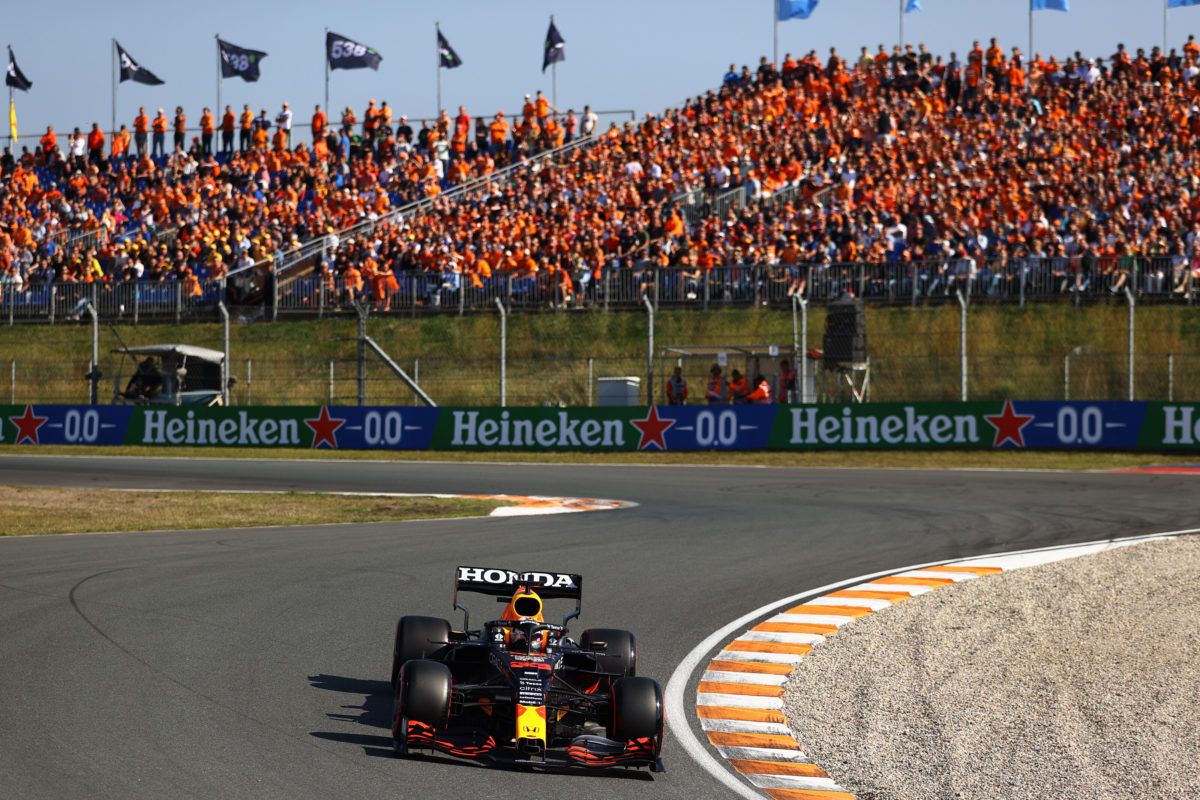 Max Verstappen has rewarded his home fans with victory in the Formula 1 Dutch Grand Prix over Lewis Hamilton and Valtteri Bottas.

The Red Bull driver overcame everything Mercedes could throw at him in a race which saw the team’s internal harmony seemingly broken.

A late stop for Bottas prompted dissent from the Finn, forcing Hamilton into a late stop to ensure he claimed the bonus point for fastest lap.

Verstappen held his pole position advantage to lead into Tarzan, the field filing through the opening sequence without incident.

A crushing opening lap for Verstappen saw the Red Bull driver sprint away to hold a 1.7s advantage over Hamilton.

Running 10th, Ricciardo’s McLaren was billowing smoke under power, a concern that had been raised as the Australian headed to the grid.

In the lead, Verstappen gradually built his lead in the opening laps while Hamilton reported his tyres would struggle to maintain the pace at the front.

As though contradicting himself, after 10 laps the Mercedes driver lifted his pace, leading Red Bull to suggest their rival may had switched to a two-stop strategy.

The gap between the front two stabilised at 3.5s, Verstappen appearing to manage the gap he enjoyed out front as the race at the front stagnated.

The race’s key animator was Perez as he worked to recover from his qualifying disappointment.

Having started on the hard compound tyres from the pit lane, a heavy lockup at Tarzan while battling with Nikita Mazepin forced him into the lane early for a new set of the medium-compound rubber.

Perez quickly caught back up to the Russian driver, passing him into the Turn 11 chicane, a move he repeated on Latifi a few laps later.

The Mexican’s march continued, passing Robert Kubica for 15th around the outside at Tarzan before closing in on Yuki Tsunoda.

After 20 laps, Hamilton pitted from second to rejoin well clear of Gasly, such was the advantage the leading three had enjoyed in the opening laps.

Red Bull reacted by bringing Verstappen in, turning him around in 2.7s to rejoin in front of the chasing Mercedes.

With Bottas having been left on track, Verstappen soon found himself cruising up to the back of the Finn.

Hamilton had reduced the Dutchman’s advantage to little more than a second, offering the Brit a glimmer of hope for when the duo caught the race leader.

“This is for the race win, so you’re defending,” came the instruction from the pit wall to Bottas as Verstappen locked on to the W12’s rear wing.

A poor run for the leader through the Turn 11 chicane allowed Verstappen a better run onto the front straight, easing by as they began Lap 31.

Bottas promptly moved aside to allow Hamilton through, pitting at the end of the lap to rejoin more than 25 seconds behind the leader.

The middle phase of the race saw a strategic battle play out, Mercedes instructing Bottas to use his tyres as it looked to move the Finn inside Verstappen’s pit window.

It was hoped he may be able to disrupt the Red Bull driver later in the race, Bottas’ tyres being 11 laps newer.

Verstappen was duly instructed to push, as the pit wall foresaw their rival’s play, in order to remain clear of the Mercedes rear-gunner.

Hamilton stopped for a second time on Lap 40, rejoining in the middle of a battle pack that included Ricciardo, George Russell, and Lance Stroll.

The leader was in a lap later, having a set of hard compound tyres bolted on versus a new set of mediums for Hamilton.

He returned to the fray with clean track and a three second advantage.

In the laps that followed Hamilton voiced concerns his tyres would not see the end of the race, before going on to set the fastest lap soon after.

Despite his radio calls, the championship leader continued to push, overriding radio calls asking him to ease off to conserve his rubber to the flag.

Inside the final 10 laps, Perez’s charge had seen him rise to the last points paying position and was locked on to the rear of Norris’ McLaren.

The Mexican was through on Lap 66 to steal the place away by going around the outside of the McLaren at Tarzan, hanging on to complete the move at Hugenholz.

The pair twice made contact, Norris running up the circuit only to find the Red Bull occupying it.

With four laps remaining, Bottas stopped for a set of soft compound tyres – a strange move given the Finn was running a solo race and his team-mate held fastest lap.

He was told over the radio “we are not going for fastest lap.”

No attention was paid to that instruction, the Finn setting a 1:12.549s to provisionally claim fastest lap.

That came despite a message from Mercedes’ strategist James Vowles instructing him to abort the attempt, forcing Hamilton to box as he started the penultimate lap.

It all but confirmed Verstappen as the race winner, holding a comfortable 25-second advantage with only the top three on the lead lap.

He duly delivered victory on home soil, Hamilton finishing second, just 21-seconds down but with the point for fastest lap.

Bottas was a distant third, Gasly in fourth ahead of Leclerc, Alonso, Sainz, Perez, Esteban Ocon, and Norris completing the top 10.

Verstappen now heads the drivers’ championship by three points over Hamilton, while Red Bull trails Mercedes by 12 points in the constructors’ fight.