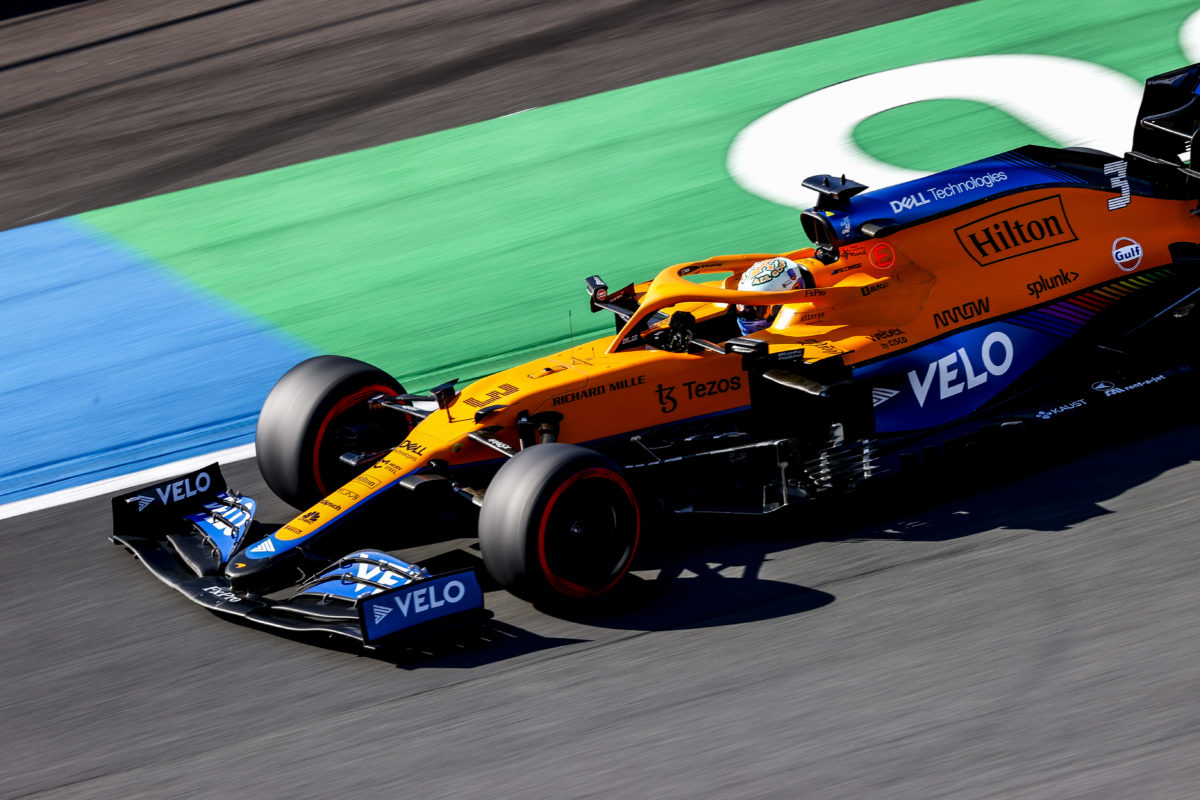 A general lack of pace and differing strategies at McLaren combined to see Daniel Ricciardo fail to score in the Formula 1 Dutch Grand Prix.

The Australian finished 11th in the 72-lap affair, one spot down on team-mate Lando Norris.

It marked a reversal of their qualifying fortunes, which saw Ricciardo start the race from 10th while Norris failed to make the cut for Q3 and lined up 13th.

The key factor in the pair’s races at Zandvoort was a 12-lap delta on their one-stop strategies.

Starting on used softs, the same tyre on which he’d qualified, Ricciardo stopped on Lap 30 from ninth place, fitting a set of hard compound tyres.

A dozen laps later, Norris pitted to swap his new mediums for a set of the white-walled rubber.

He was able to rejoin just behind Ricciardo, who soon after moved aside to allow his more freshly-booted team-mate the opportunity to exploit the grip advantage.

“We managed to get Lando ahead of some cars, we tried to play the team game also,” explained McLaren boss Andreas Seidl.

“Obviously with Daniel also stopping quite early in the race, [swapping] onto the hard tyres after the sequence started quite early, we instructed him to manage his pace,” he continued.

It was hoped that would allow Ricciardo the opportunity to attack later on as those who opted to fit a set of medium tyres began to struggle for pace.

“With Lando having at the same time free air on his first tyres, [he] could actually use the pace that was available,” Seidl added.

“Unfortunately, after then probably 10 laps for Lando, he had great pace compared to cars in front of him, this was also not there anymore.

“In the end, we couldn’t achieve more than a single point today.”

At the start of the race, Ricciardo’s car was seen smoking, though that proved to be nothing more than a well filled oil reservoir burning off and soon disappeared.

The Australian also had gear selection issues at the start, which cost him a place as the race commenced.

“Coming up to the line, I went to pull the clutch and it wasn’t working, so my preferred clutch paddle had an issue,” Ricciardo explained.

“I did the start with my other hand and that was a big part of losing a position to [George] Russell off the line.

“But we recovered well and I got back past Russell and [Antonio] Giovinazzi.

“We actually gained a position on Lap 1 when I thought we were going to lose a few, so that was great.”

Bottled up behind the tyre-saving Alpines, Ricciardo found himself stuck, unable to match them once they raised the pace.

Following his pit stop, the 32-year-old also slowed Russell and Lance Stroll behind him in an effort to aid team-mate Norris.

It was a ploy to get both McLarens in the points, though failed to pay full dividends.

“It was hard to get going after that and I think ultimately the pace wasn’t that good,” Ricciardo said.

“We did struggle a bit, for different reasons, in the first and second stint.

“We were P10 at one point today, but it was hard to see how we could’ve been much higher than that.

“I’d have obviously loved to score points, but we’ll analyse it and learn from it.”

McLaren now sits fourth in the constructors’ championship after a double points finish for Ferrari, the gap between the two teams 12 points.

The Italian Grand Prix is next, with opening practice starting at 22:30 AEST on Friday.