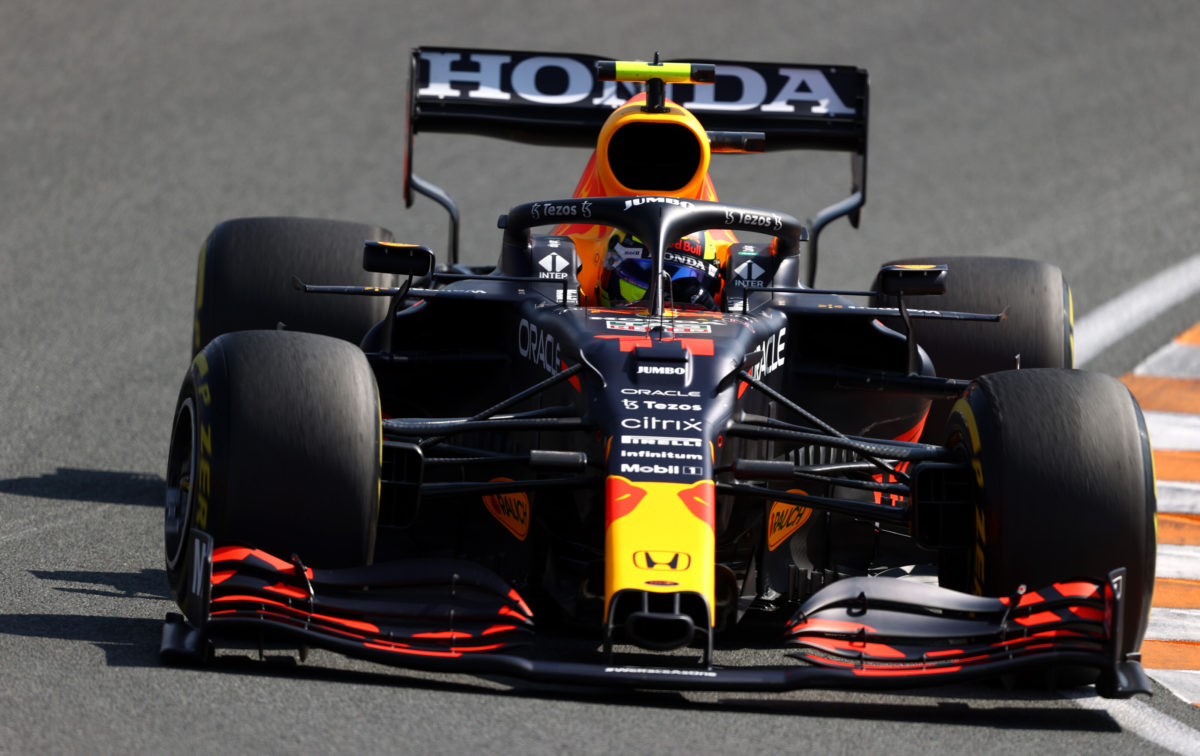 Sergio Perez scythed his way through the field to finish eighth in the Formula 1 Dutch Grand Prix after starting from pit lane.

Dramas in qualifying meant the Mexican was due to start 16th before the team elected to replace his power unit ahead of the race.

That necessitated a pit lane start on a circuit many expected would be near impossible to pass on.

In the early stages, that appeared to be the case as Perez locked up heavily, flat spotting a tyre and forcing an early stop.

That further compromised his race as, having started on the hard compound tyre, he switched onto the medium rubber on Lap 8.

What followed was a spirited charge through the field, climbing from 19th after his early stop to ninth by the time he pitted again on Lap 47.

In the latter stages, he hunted down and passed both McLarens, first Daniel Ricciardo and then Lando Norris, before despatching Esteban Ocon with three laps remaining to seal eighth at the chequered flag.

“I gave it my all, every overtake was on the limit and I had to take a lot of risks,” Perez confessed.

“Today was all about damage limitation as I started from the pits after taking the penalty for the engine change.

“It was a bit of a shame at the end when Lando and I touched, I had a lot of damage on the right-hand side of the car.

“I think it was a racing incident as I wasn’t given enough space and I don’t think he could see me.”

Norris and Perez battled through Tarzan corner, a squabble that was only resolved as they reached Hugenholz two turns further on.

Holding the inside line at Tarzan, Norris looked to move up the track on corner exit, only to find Perez had hung his Red Bull around the outside.

They twice made contact, the McLaren driver finally having to cede the spot as they rounded the right-hander approaching the heavily banked Hugenholzbocht.

“Since that point I lost a lot of grip, otherwise, I definitely think P6 was on the cards today,” claimed Perez.

The performance saw the Mexican win the driver of the day fan vote, while team boss Christian Horner was pleased with the recovery.

“Sergio won driver of the day and he has driven a great race,” Horner said.

“Not only did he take the penalty, he had a huge flat spot and we had to pit him for safety reasons, so he was in an even more difficult position then.

“He made great progress through the field, scoring important points for us and improving his confidence after a really tough Saturday.”

However, it still lost ground to Mercedes, which amassed 34 points courtesy of Lewis Hamilton in second (with the bonus point for fastest lap) and Valtteri Bottas in third.

Formula 1 moves to the Italian Grand Prix this weekend, opening practice for which gets underway at 22:30 AEST on Friday.