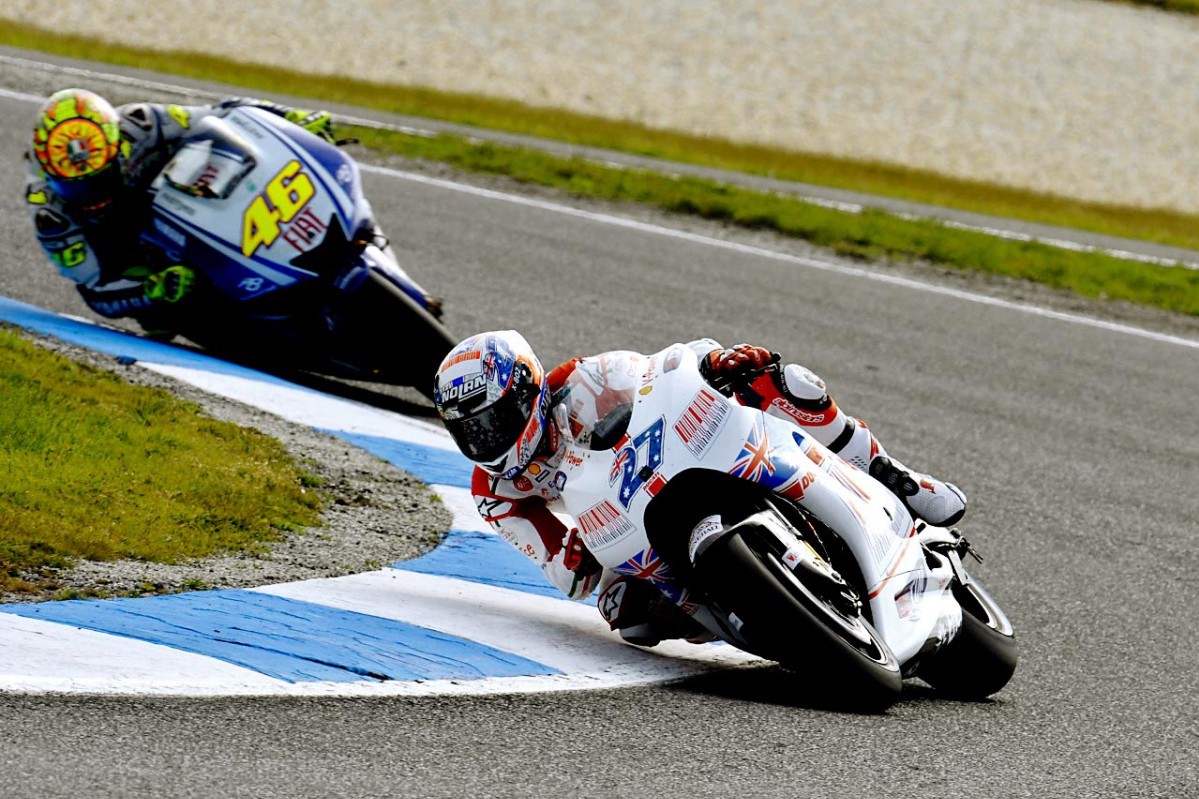 Valentino Rossi believes that the natural talent which Casey Stoner brought to MotoGP was “unbeatable”.

Stoner, like Rossi, won premier class titles with multiple manufacturers, and 38 MotoGP races along the journey.

However, the Australian’s journey ended when he retired from racing at the age of just 27, with those championships at Ducati and Honda to his name.

The 42-year-old Rossi boasts seven premier class titles, a haul which spans the 500cc and four-stroke MotoGP era, with Honda and Yamaha.

While the Italian is regarded by many as the greatest of all time, he had high praise for Stoner in an interview with Britain’s BT Sport.

“One of the most talented and difficult riders to beat because, for me, about the pure talent, he’s unbeatable,” said Rossi of the 2007 and 2011 world champion, as he reflected on the 175 riders he had raced against in the premier class.

‘The Doctor’ also had a similarly high opinion about someone with whom he shared the Yamaha garage, namely Jorge Lorenzo.

Rossi won the MotoGP world championship immediately upon his switch to Yamaha in 2004, marking the Iwata manufacturer’s first such title in 12 years, and joked that he was not repaid any favours when a certain Mallorcan arrived on the scene.

“And also Lorenzo; I don’t deserve a team-mate like Lorenzo in the Yamaha, after what I do for Yamaha,” he smiled.

“I need one a little bit more slow.”

Rossi and Lorenzo once had to be separated by a wall in the Yamaha garage, during the former’s first stint there, and the tension spiked again in the controversial end to the 2015 season.

That was when #46 was penalised for deliberately causing Marc Marquez to crash in the Malaysian Grand Prix, while he maintained that the Spaniards were conspiring against him in his bid for an ever-elusive 10th grand prix world championship in total.

Rossi has great respect, too, for what Marquez does on a motorcycle, but suggested it could be a very long time before they are able to get along again.

“Marquez is a great rival and he’s very, very fast, very strong; one of the best,” declared the veteran.

“But with Marquez, I don’t feel very well; difficult to battle.”

When it was implied that they may take some time to enjoy a more harmonious dynamic, Rossi responded, “Yeah, another 20, 30 years.”

Rossi’s 500cc world championship debut came in 2000, the in which Anthony Gobert made his last start in a one-off appearance on a Modenas for Kenny Roberts’ team.

The Australian was at one point the youngest Superbike World Championship race winner, but it is something else which the seven-time 500cc/MotoGP champion remembers vividly of him.

“I did a party with Gobert in Rio; difficult…” recalled Rossi as he inhaled for effect.

“Difficult to stay on the slipstream, but he was a good guy.”

Gobert, too, is regarded as having a gift on two wheels.

However, getting the axe from the factory Suzuki 500cc team in 1997 after a positive marijuana test would sadly be but one of a number of setbacks in his life/career due to drug use.

Rossi announced his retirement as the 2021 season resumed from the summer break in August, at which time the “best” messages he received came from the likes of Stoner and Lorenzo.

But for the possibility of wildcard starts, the sixth-last round of his career is next weekend’s Aragon Grand Prix.