Puig: Espargaro showed at British MotoGP why Honda wanted him

Puig: Espargaro showed at British MotoGP why Honda wanted him Pol Espargaro demonstrated in MotoGP’s British Grand Prix why Honda wanted him, according to its factory team manager Alberto Puig.

The former Red Bull KTM rider took pole position at Silverstone having not been able to qualify any higher than eighth in his 11 prior rounds with Repsol Honda, and said that achievement “felt like a victory”.

He went on to finish the race in fifth, having led until midway through Lap 5, when eventual winner Fabio Quartararo got through.

Despite missing out on a podium, the performance was by far and away Espargaro’s best since he made the move from KTM in the last off-season

It also came after he had finished a position outside the points in both races which were held at the Red Bull Ring, namely the Michelin Grand Prix of Styria and the Austrian Grand Prix.

By way of contrast, world championship-winning team-mate Marc Marquez was among those who failed to score at Silverstone, due to a Lap 1 clash with Jorge Martin.

Summing up the race, Puig said, “The positive is that Pol Espargaro has been able to return to his true level, he has shown the reason that we asked him to join HRC.

“The negative is Marquez’s crash.”

Espargaro was one of the big-name signings in the last silly season, with his deal finalised even before Alex Marquez got a chance to race for Repsol Honda.

However, #44 had not looked competitive at any point leading up to the British Grand Prix, with his previous best finish being eighth positions in the Qatar and French Grands Prix.

Honda, too, has struggled in general, although Marc Marquez has managed to be its top rider in the championship despite missing the first two rounds of the campaign due to injury.

Espargaro explained on the eve of the Silverstone race that he was still going to treat it as a learning experience, given his unfamiliarity with the RC213V, but Puig believes the event represented a “turning point” for Honda’s latest recruit. 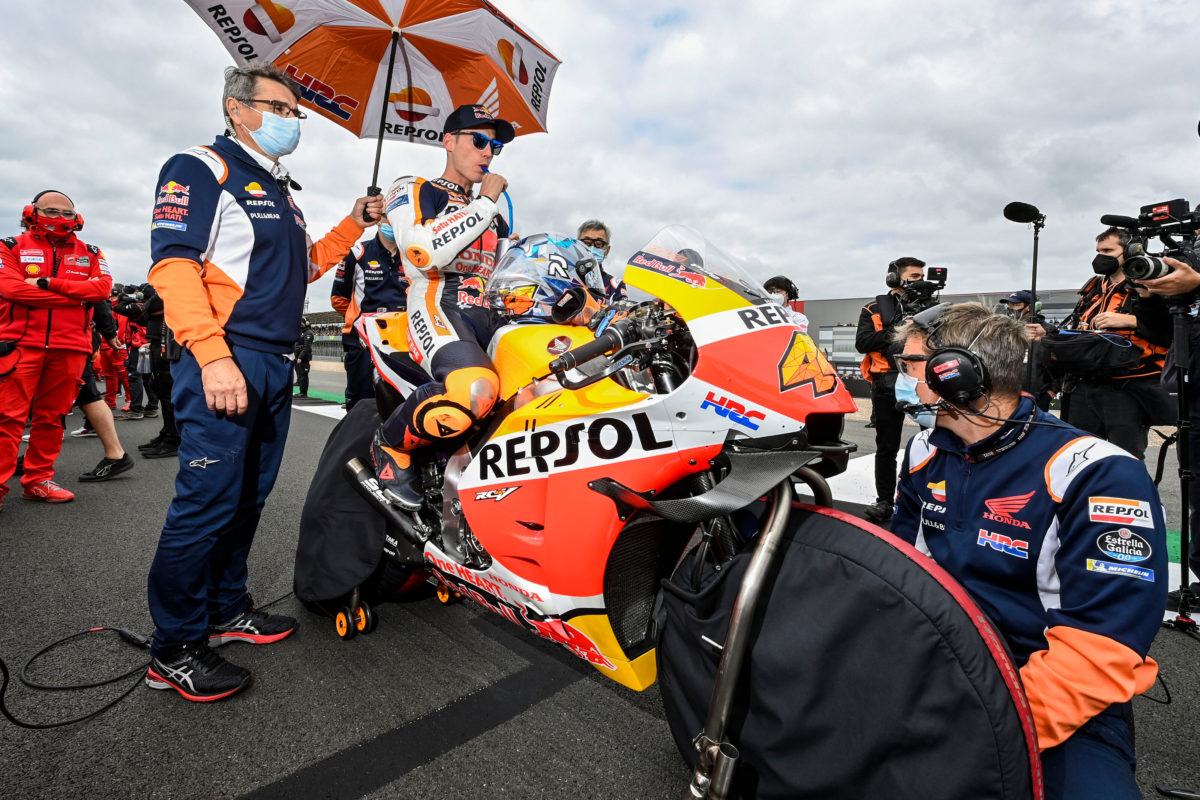 Espargaro on the grid

“This weekend has been a very important turning point for Pol Espargaro,” he asserted.

“I think he has made a massive step compared to what he has been doing so far throughout 2021.

“I think that the way he approached the race was very good and he was able to show his potential, his real potential.

“Pol is a rider who can be in these positions, so we hope from now on he can continue in this way and keep making progress.

“We are very happy for him inside the team and HRC, it has been difficult for him, and he deserved this good result.

“He was fantastic during qualifying to take pole position and although he was of course aiming for the podium in the race, he has been able to make an important step and return to his old form.”

An Espargaro did finish third at Silverstone, Aleix delivering Aprilia’s first podium in the MotoGP era.

Pol Espargaro was satisfied also, having only missed the podium by a little over four seconds.

“First of all, to fight against my brother in MotoGP… not that many brothers were fighting for the podium or a race victory,” said Pol.

“That was quite emotional and I feel actually super proud.

“I really enjoyed those first laps in the race. I was remembering what the feelings were [to be at the front].

“I would love to be on the podium. I think we had the potential, but the situation we have now is what it is and we couldn’t fight more than I did, in my opinion.

“At the end, we need to be happy. We need to see the overall of the weekend and if before come here someone told me that I’m going to do the pole and finish in fifth position, just four seconds off the podium, I would sign for it. So, we must be happy.”

The 30-year-old had said that the extra grip on offer at Silverstone was one of the factors in his qualifying performance.

All four Honda pilots then opted for the soft compound rear tyre for the race, while Esponsorama Ducati rider Enea Bastianini was the only other to do so.

Espargaro said it was the right choice regardless of how he was wanting for tyre life in the second half of the contest, but showed what Honda needs to work on.

“I think we did the correct tyre choice, but it should not be the correct choice when all the other manufacturers, the winning guys, were using the medium rear,” he explained.

“Through all the weekend they were going fast with the medium and we couldn’t.

“It was dangerous for us. We were missing a lot of grip so we needed to use the soft. This put us in a critical situation that means that we are missing grip. It’s something that we know, but here it was obvious.

“So, we are working on it and I think we will solve the problem soon. Hopefully as soon as possible, if not next year. Sure, it’s our weak point at the moment.”

Pol Espargaro is 14th in the championship ahead of the Aragon Grand Prix, which takes place next weekend.