Miller: Hard to know how to feel about fourth in British MotoGP

Miller: Hard to know how to feel about fourth in British MotoGP 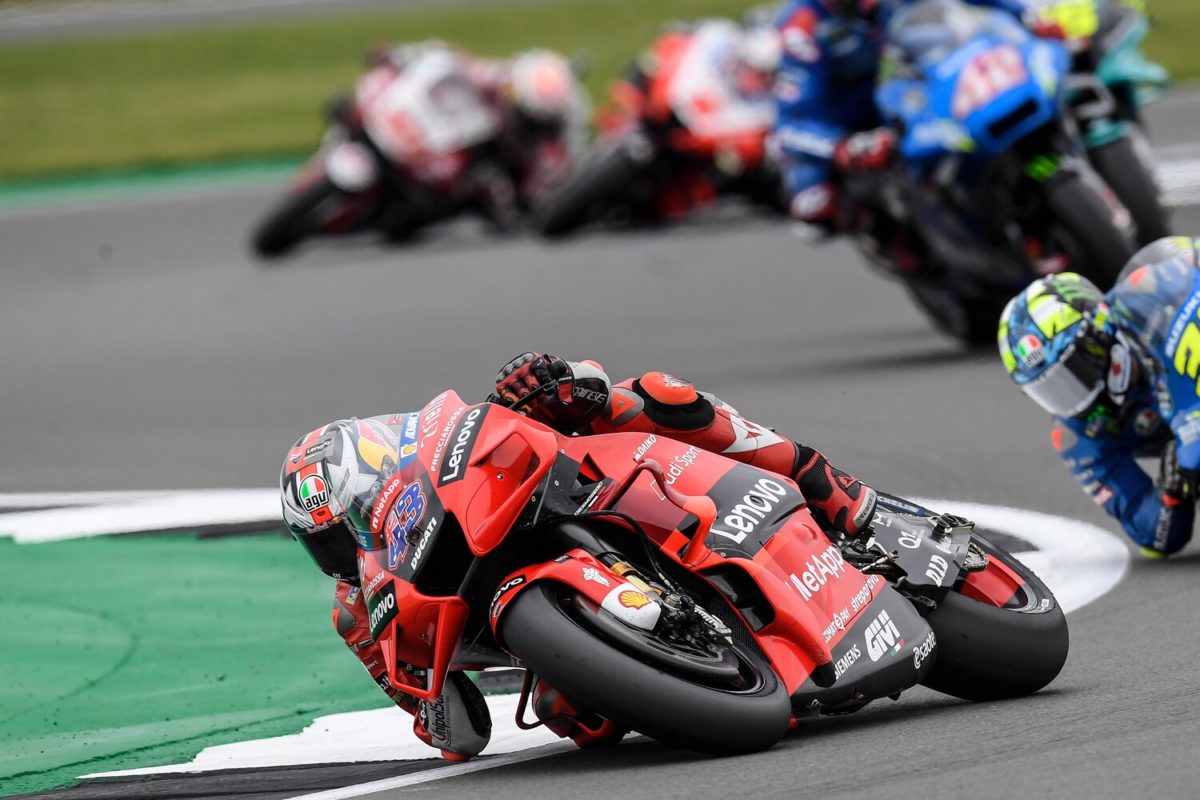 Jack Miller says it is “hard to know how to feel” about a British MotoGP in which his fightback just failed to yield a podium.

Miller was ever so briefly ahead of Aleix Espargaro on the final lap at Silverstone, but took the chequered flag 0.149s behind the third-placed Aprilia Racing Team Gresini entry.

The Queenslander looked in trouble in the early stages, struggling to keep pace with the front group and then dropping to seventh when a mistake on Lap 6 let both of the Suzukis through.

Ducati Lenovo team-mate Francesco Bagnaia’s terminal slide down the order gave him back one spot before he re-passed Joan Mir on Lap 12.

Soon it became apparent that a comeback was on, thanks in part to tyre choice, with Miller overtaking pole-sitter Pol Espargaro (Repsol Honda) on Lap 15 and going after the elder Espargaro brother.

On the 20th and final lap, he went down the inside of #41 at Village but Espargaro hit back almost immediately, through Aintree, and stayed ahead until they got back to the control line.

“It’d be hard to get much closer to a podium than that – a bit over a tenth of a second after racing for 40-odd minutes – so it’s hard to know how to feel about Silverstone on Sunday,” wrote Miller in his post-round column.

“On one hand, it was a good bounce-back for me because six laps in, it wasn’t looking too good, but I was biding my time. And I nearly timed it right.

“I was seventh with half the race to go but a load of guys in front of me were running the soft front tyre, and I was on the mediums so the race was always going to come to me.

“And it did – I passed my team-mate Pecco, Mir, and then Pol, and all of a sudden Aleix was in front of me and a podium was there if I could get by him.

“I had five laps to do it – well, technically I did do it because I was past him for a second there on the last lap – but he got on the box and I didn’t.”

Miller admitted he was “pissed off” about qualifying seventh, lapping slower then on new tyres than he had done in practice on used tyres, but was pleased with how he managed his race.

“Where this race did feel good was that I was able to control it a lot more, and I had as good of a pace as anyone in the second half of the race and didn’t fade with tyre wear or something physical, or anything else,” he added.

“I was trying to work my way into the race on that medium tyre, so I executed the race I wanted to, let’s say.

“The first lap was hectic but I got out of that OK, and then I could see the group at the front and could set my sights on them – well, everyone besides Fabio [Quartararo] anyway, because he just cleared off and that was all we saw of him after about seven laps.

“We were all pretty much racing for second after he pulled the pin.”

Quartararo is now 65 points clear atop the championship, leading Bagnaia to assert that the Yamaha rider has effectively won the title already.

Bagnaia himself is another five points behind in fourth position, and Miller 18 more in arrears in fifth.

Round 13, the Aragon Grand Prix, takes place at MotorLand Aragon on September 10-12.