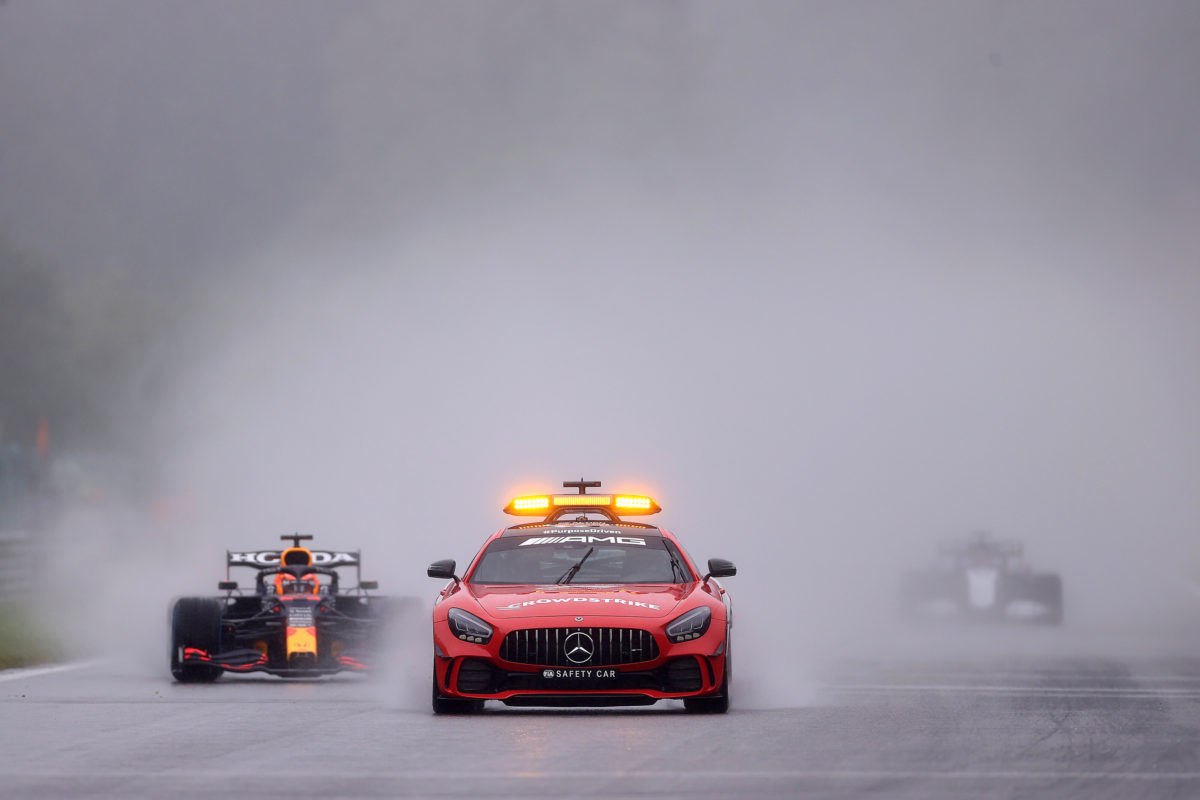 Max Verstappen has been credited with victory in a Formula 1 Belgian Grand Prix that never truly got started due to heavy rain.

In one of the most bizarre events in F1 history, just two laps were completed behind the Safety Car, the bare minimum required under the rules for a race to be declared.

As a result, the field was therefore classified in largely qualifying order, Verstappen the winner from George Russell and Lewis Hamilton.

A 25-minute delay preceded the field trailing the Safety Car for a series of formation laps, though doing so after the ‘delayed start’ message was shown on timing screens.

After two laps, the Safety Car pulled the field into the pit lane under red flag conditions, officially with the ‘start procedure suspended’.

Those laps did not count towards the race, a point which sparked confusion within the pit lane.

With a long stoppage following, there was also confusion around the number of laps remaining with disagreement over whether it was 44, 43, or 39 laps should things get under way.

At 17:00 local time, two hours after the scheduled start time, it was announced that the three-hour countdown clock would be stopped in line with the International Sporting Code on Force Majeure grounds.

It was finally decided that the race would resume at 18:17, more than three hours after the original scheduled race start time.

Drivers were obliged to fit extreme weather tyres as they joined the track behind the Safety Car.

Under the stoppage, Aston Martin fit Lance Stroll’s car with a new rear wing, a matter which was referred to the stewards as it was of a different specification.

He slotted in behind Kimi Raikkonen, who’d had a new rear wing fitted following qualifying and therefore also technically started from the lane.

Otherwise the order was as the cars had qualified as they trailed behind the Safety Car for two laps – enough to make the race official and to have half-points awarded.

With conditions showing no sign of improvement, the red flag was shown at the end of the third lap to suspend the race once more, finally called at 18:44 local time.

It makes the race the shortest in Formula 1 history, easily besting the record previously held by the 1991 Australian Grand Prix (14 laps).

In championship terms, Hamilton’s advantage was cut from eight points to three, while Red Bull now trails Mercedes by seven points in the constructors’ championship.