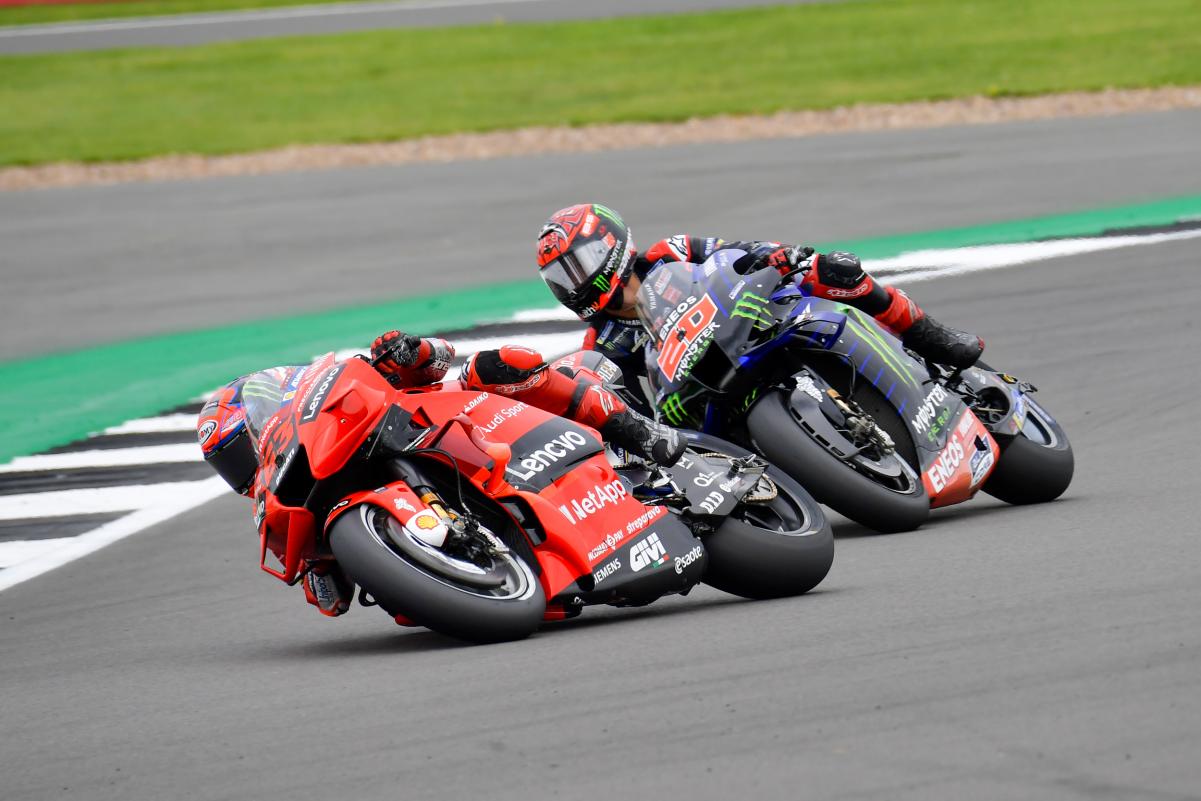 Fabio Quartararo has already won the MotoGP championship, according to the man who had been the Frenchman’s nearest rival before the British Grand Prix.

Quartararo rode his Monster Energy Yamaha to a dominant victory in that event and, in doing so, extended his lead at the top of the standings from 47 points to 65.

Francesco Bagnaia, on the other hand, dropped from second in the championship, in which he had the edge on Joan Mir on a countback, to fourth, at 70 points off the pace.

With just six races left per the current calendar, and 25 points for each race win, Bagnaia believes that Quartararo’s advantage is now insurmountable.

“Now, Fabio has already won the championship, because 70 points are too much to recover,” said the Ducati Lenovo Team rider.

Bagnaia was a downbeat figure post-race at Silverstone, where he finished 14th and thus collected only two points.

The Italian had qualified second and was initially in the battle for at least a podium before a dramatic slump, which he was at a loss to explain.

“Sincerely, I don’t have a lot of things to say,” admitted Bagnaia.

“It’s clear that something [had] gone wrong, because all the weekend I was fighting and I was always every session at the top – FP4, I was third; qualifying, I was second – so my pace and my consistency was great.

“But then in the race, I don’t know what happened, because I was struggling a lot; I never had this low grip, so I suffer a lot.

“It was a really difficult race; I tried all to don’t lose too much position, but in the last laps, I was riding like a Moto2, the same pace of the Moto2 victory.

“So, I struggle a lot and we have to understand what is happening, because this is not normal. It’s the second race in three races that I’m losing points and I’m not doing good result [when it is] not for our fault. Like, this is very difficult.”

As for the remainder of the season, he added, “We don’t lose our ambition to try to win.

“It will be very difficult, but [when it is] like this, it is even more difficult, because you do a good work all the weekend, and then in the race something happened and you can’t do your pace or you can’t go fast as you know, so this is very difficult.”

Mir fared only somewhat better than Bagnaia, progressing as high as fifth in the order before slipping to ninth at the chequered flag.

The 2020 champion was said to have encountered an issue with front end feel, on a day when Suzuki Ecstar team-mate Alex Rins finished second.