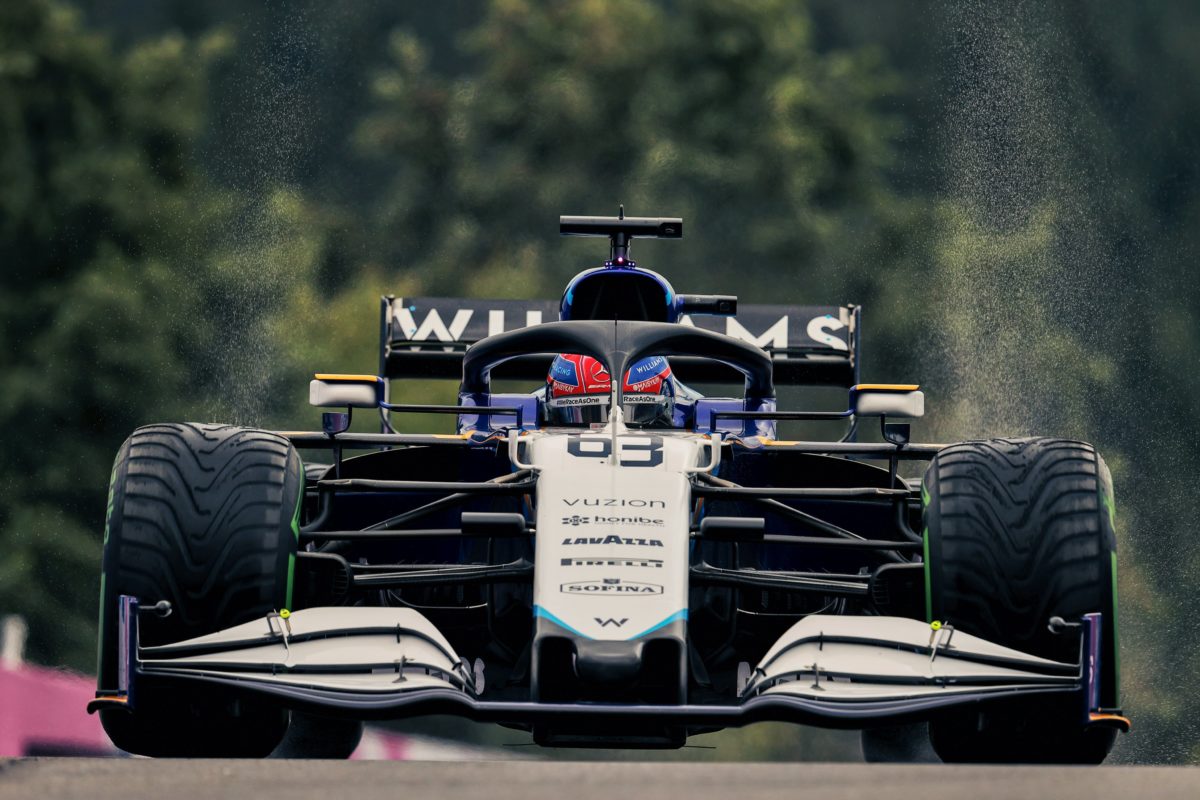 Max Verstappen has stolen pole position from George Russell in a tumultuous qualifying session for the Formula 1 Belgian Grand Prix.

A heavy crash for Lando Norris saw Qualifying 3 interrupted for 40 minutes before a stunning lap from Russell almost saw the Williams driver nab an unlikely pole.

Russell lost out only at the death knell to Verstappen, with Lewis Hamilton third alongside Daniel Ricciardo on the second row.

After a delayed start it was a busy opening to the session as teams were keen to get on track and bank a lap around the seven-kilometre circuit.

“It’s definitely wet so far, but it’s going to be inters pretty quickly,” was the message from Lando Norris back to the pit wall.

With the exception of the two Williams drivers, the field had headed out as one on the full wet tyres.

Nicholas Latifi duly spun at the Fagnes chicane, the yellow flag hindering Russell’s lap as the next car on track.

Russell duly delivered a 2:11.727s started proceedings, a time that was on par with the fastest of those on full wets, suggesting the intermediate tyre may have been the better option.

That was true until Verstappen completed his first time, recording a 2:07.574s, and Russell his second with a 2:02.068s to move three seconds clear of Latifi who went second fastest.

Predictably, the field took to the lane and swapped to the shallower grooved rubber having seen the performance of the two Williams drivers.

It made for a busy track, with every car circulating in the hope of getting the best of the conditions.

Carlos Sainz shot to the top with a 2:02.057s, but was quickly demoted by both Sergio Perez, Ricciardo, Charles Leclerc, Russell, and Verstappen.

With four minutes remaining the timing sheets continued to change as rapidly as the weather, intermediate tyres still the order of the day.

Ricciardo logged a time good enough for 12th as the chequered flag was waved to end the first qualifying segment.

The Australian snuck though as Antonio Giovinazzi, Yuki Tsunoda, Mick Schumacher, Kimi Raikkonen, and Nikita Mazepin all fell at the first hurdle.

He did so with Norris fastest with a 1:58.301s, a time more than three seconds up on his McLaren team-mate.

Qualifying 2 got underway with rain predicted to begin falling five minutes into the segment.

Hamilton was sent out on a scrubbed set of intermediate tyres, but was promptly called in for a new set.

Norris was the first of the front runners to bank a time, a 1:57.235s suggesting conditions had improved slightly from Qualifying 1.

A slow first lap left both Hamilton and Valtteri Bottas mired in the bottom five, a second lap extricating them only as far as seventh and ninth respectively.

Bottas found himself bundled out of the top 10 as others improved, joined in the elimination zone by Ferrari’s Carlos Sainz.

The Spaniard managed to move out of the bottom five with four minutes remaining, pushing Leclerc into 11th.

As he finished his lap, Mercedes completed two racing pit stops to fit new intermediate tyres on both its cars.

Hamilton had slipped to 11th as Leclerc completed a lap with just under three minutes left.

With the chequered flag out, Vettel improved to second best behind Verstappen.

Norris resumed top spot with his final lap as Hamilton shot up the order to second and Bottas third after burning a third set of intermediate tyres.

A late lap from Ricciardo saw the Australian shoot up to ninth and book his place in Qualifying 3, condemning Leclerc, Latifi, Sainz, Fernando Alonso, and Lance Stroll to the sidelines.

Heavy rain fell again as Qualifying 3 began, a mixture of intermediate and full wet tyres in use by the 10 surviving runners.

Norris was on the blue-walled full wets while Gasly and Russell headed out on inters.

On track, Vettel called for the red flag to be shown, the Aston Martin driver using a full wet tyre.

“Quite a bit of aquaplaning,” was the report from Norris, who carried on regardless.

It was a decision that would end in disaster for the Brit at Raidillon after losing control of the McLaren.

He was able to climb from the car and was taken to the medical centre for checks as the session was red flagged.

Ocon, on a set of full wets, headed the field back out when running resumed, though not everyone opted for the blue-walled rubber.

Indeed, most opted for intermediates, with Russell the only other driver on full wets.

Both he and Ocon returned to the pits and fitted a set of intermediate tyres.

Hamilton set the first timed lap of the segment, a 2:01.552s the result after taming a car which tried desperately to get away from him.

There were huge gaps between the drivers, Bottas recording a 2:03.093s to go second fastest before Verstappen logged a 2:02.525s.

More than six seconds covered the nine remaining runners after their first timed lap, Russell ninth on a 2:08.059s.

A late flying lap for Perez saw him slot into second, a 2:02.112s set with a minute remaining in the session.

Russell then sensationally rose to provisional pole as the flag fell, bettering Hamilton and Perez.

As others completed their laps, the Williams driver looked set for top spot until Verstappen improved late to record a 1:59.765s.

It left Russell a surprise second while Hamilton will start third from Ricciardo with Vettel fifth, then Gasly, Perez, Bottas, and Ocon.