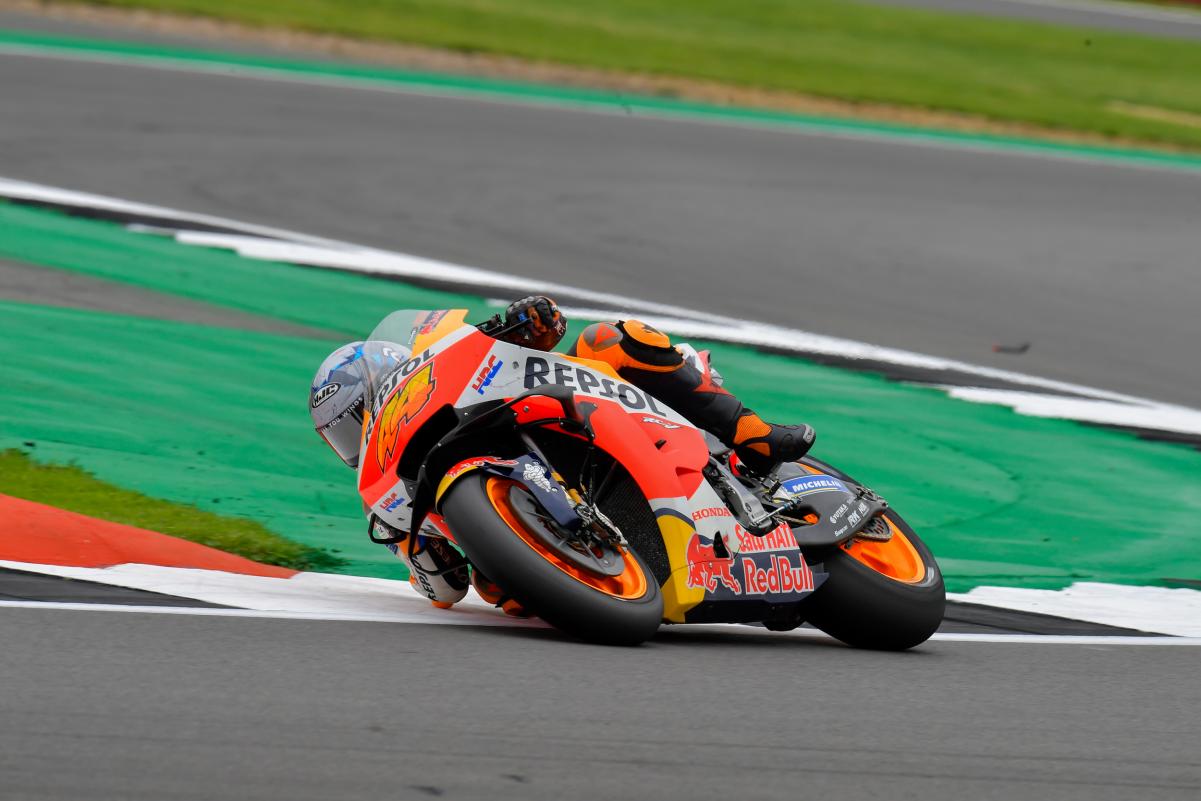 Pol Espargaro has taken his first pole for Honda after Jorge Martin eventually lost his fastest lap time in qualifying for the British MotoGP for a blatant shortcut.

Espargaro nailed a 1:58.889s at the start of his second run but looked to have been subsequently blitzed by an astonishing 1:58.008s for Martin in the final minute of Qualifying 2 at Silverstone.

However, the Pramac Ducati rider had been 1.5s up at the second sector that time around, leading to intrigue as to exactly how he had done it given broadcast cameras had not been following the whole lap.

Minutes later, a replay revealed that he had cut the circuit through the Vale/Club complex, but it still took significant time after that for the lap to be officially cancelled.

The change to the classification put the #44 Repsol Honda entry back on pole, ahead of the Ducati Lenovo Team’s Francesco Bagnaia and championship leader Fabio Quartararo on his Monster Energy Yamaha.

Quartararo had been on top after the first flyers in Q2 with a 1:58.990s, the fastest lap of the weekend to that point.

It was then that Martin set his unbelievable time, before Quartararo improved marginally to a 1:58.925s, although not enough to improve from what was fourth at that point, until #89’s fastest lap got cancelled.

Martin was officially fourth all told on a 1:59.074s, while Marc Marquez (Repsol Honda) and Aleix Espargaro (Gresini Aprilia) got in late efforts to take fifth and sixth, respectively.

Back in Q1, Rins and then Zarco managed to get themselves out of a hole with the chequered flag out.

Enea Bastianini (Avintia Esponsorama Ducati) was fastest on a first-run 1:59.553s when he crashed at Abbey, a spill which in fact ruined a flying lap for Rins due to the yellow flag which it triggered in Sector 3.

However, the Suzuki rider regrouped to set a 1:59.509s on his final lap, jumping from fourth to the top in the process.

Zarco then came through to clock a 1:59.288s which bumped Bastianini out of Q2 and thus consigned the rookie to 13th on the grid, where he is set to start alongside team-mate Luca Marini (Sky VR46 Esponsorama Ducati) and Takaaki Nakagami (Idemitsu LCR Honda).

Lorenzo Savadori (Gresini Aprilia) was withdrawn before Free Practice 3 due to the ankle injury which he sustained in the Michelin Grand Prix of Styria.

Race start at Silverstone is due on Sunday at 22:00 AEST, with 20 laps the journey.