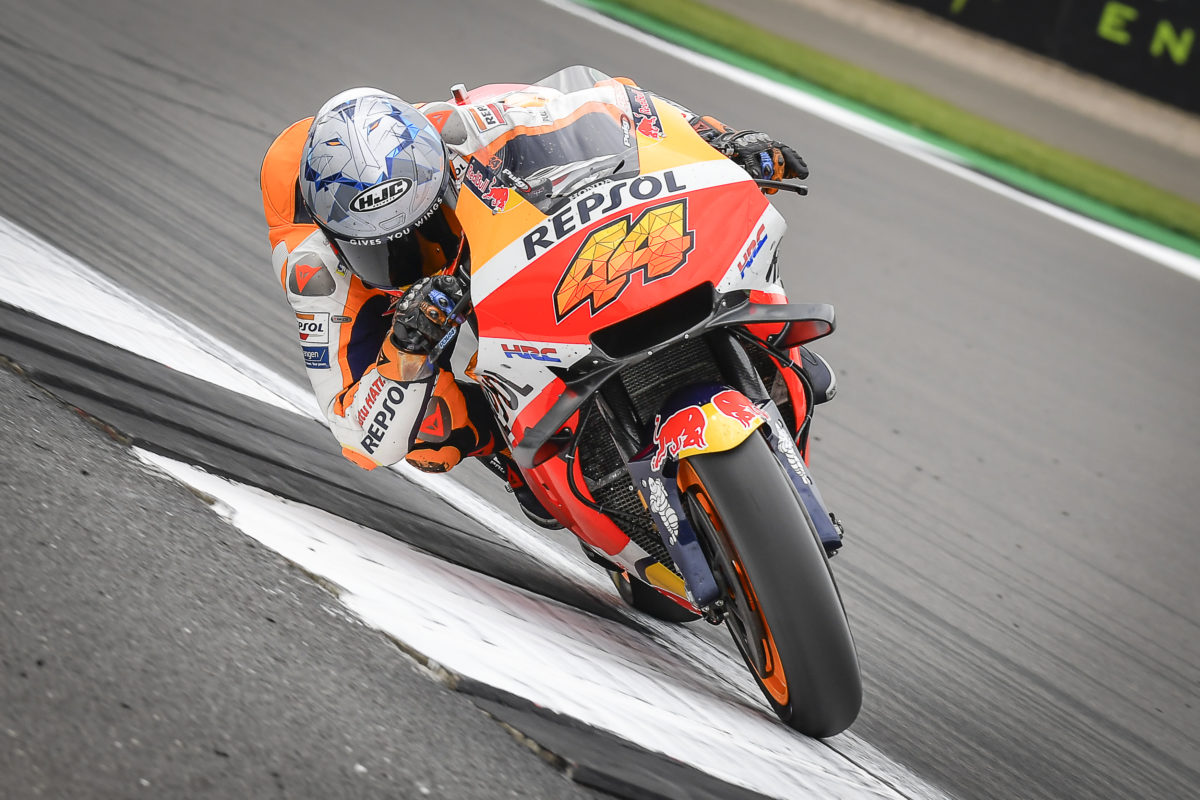 The three front row starters for the British Grand Prix will use their holeshot devices despite the drama which Jack Miller experienced last time MotoGP was at Silverstone.

MotoGP skipped Britain last year due to the COVID-19 pandemic, meaning its previous round at Silverstone took place when such devices were still in their infancy.

Miller qualified on the front row on that occasion and while he made a good start, he lost spots into the first corner and on the run to Maggots/Becketts/Chapel, having been unable to get his holeshot device to release.

Ducati pioneered that system and what it has now evolved to, namely something commonly referred to as a ‘rear ride height’ device which causes the back end of the bike to squat in-race for enhanced acceleration.

Aprilia is now reportedly even ushering in a front-end version but Suzuki, having only just introduced its rear ride height device when the season resumed from the summer break with two rounds at the Red Bull Ring, has taken it off the GSX-RRs this weekend.

Joan Mir hailed the development for helping him to get onto the podium in the Michelin Grand Prix of Styria but Suzuki’s version still needs work and had been costing him more time than it saved at Silverstone, which has far more flow than the Red Bull Ring.

There is/has been also a school of thought that the device creates instability under brakes, something which Repsol Honda’s Pol Espargaro and Marc Marquez both suggested earlier this season.

Espargaro has qualified on pole this weekend and, when asked by Speedcafe.com about what the rear ride height device is like to deal with at Silverstone, and whether it was a worry for the start, he said that he would be looking to take advantage of it.

“We were thinking about it as well, about Jack’s problem, but I’ve been trying out of the pit box,” he explained.

“We were trying to simulate this, say, for sure, in a much higher speed, and for us it looks like it’s not going to be a huge problem.

“Maybe you are going to see me sitting on the rear on the back straight and I am talking now it’s not going to be a problem,” laughed the Spaniard, “so we need to prove that.

“But at the end, for sure it helps us.

“We are working quite a lot on it. Still, we need a little bit more development on that, we need to improve on that system because for sure we’re looking at the Ducati system, even other manufacturers’, since they are a little bit better.

“But anyway, Honda brings a good one and it’s super useful here in Silverstone.” 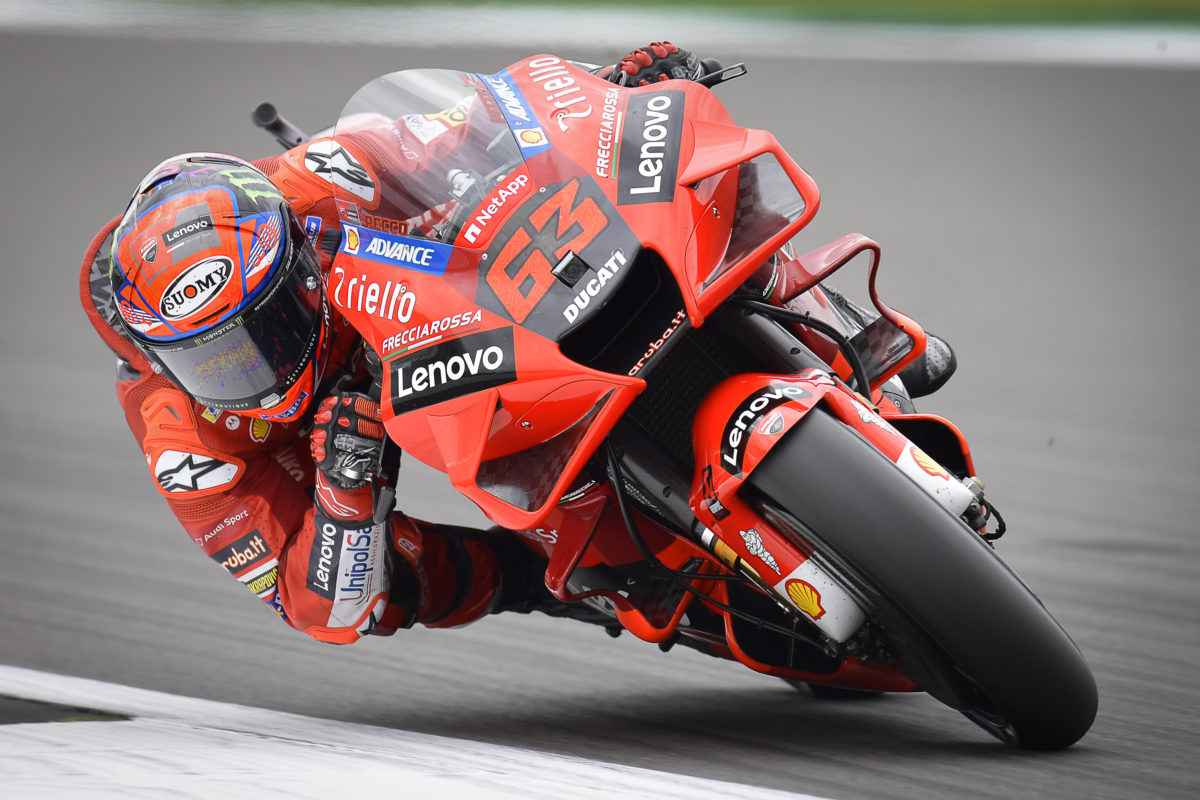 The Ducati Lenovo Team’s Francesco Bagnaia qualified second and, being on a Desmosedici, could reasonably be expected to have one of the better, if not best, rear ride height devices in the field.

He had a similar view, and suggested Suzuki’s problems were down to its relatively unrefined system.

“I think Suzuki introduced the holeshot last race [Two rounds ago] and maybe they are to develop a lot more,” said the Italian.

“Because, if we look at the first race [in which Suzuki used the device], their bike was going down so fast, and in this track, it can start a lot of movement.

“I think that our one is the best one and for us it’s no problem to use, and just help us to also in the braking, so for us it’s not a problem.

“For the start, maybe it can be a problem because at this track, we don’t have a strong brake [application] in the first corner, but for sure, all the riders will use it, and we have to use it too.” 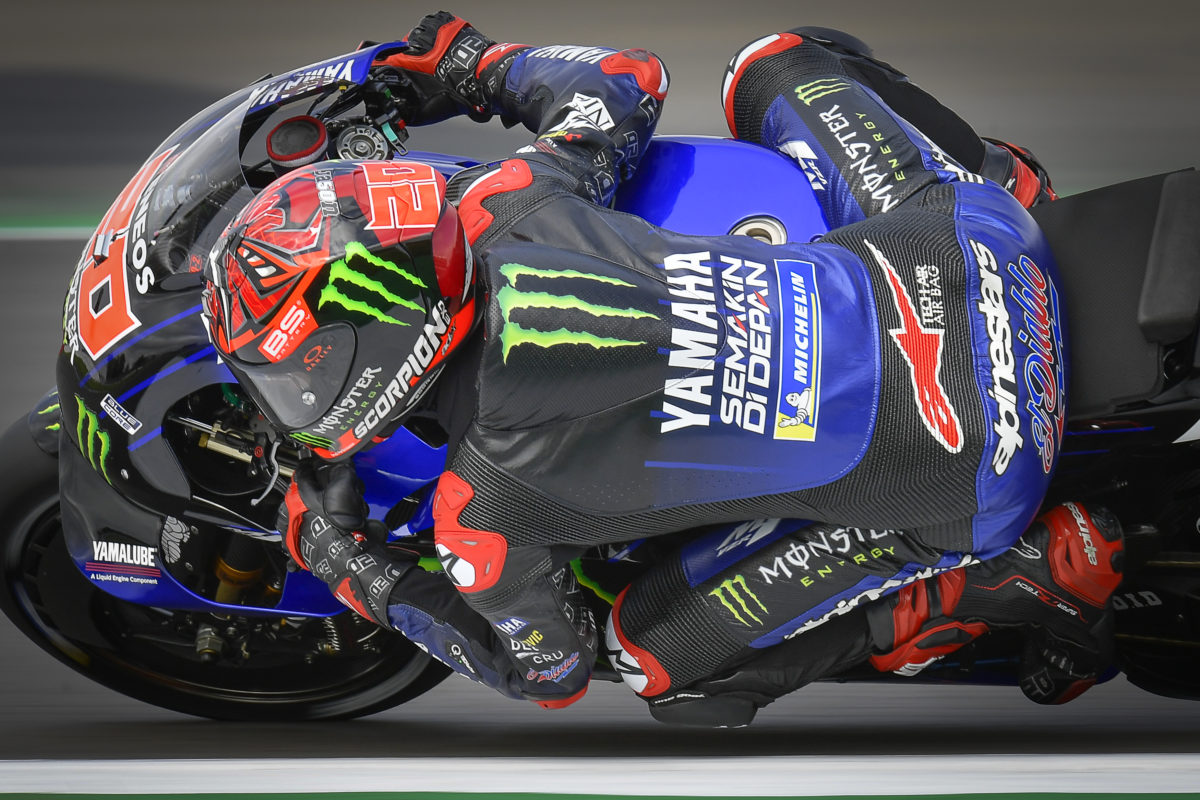 Championship leader Fabio Quartararo qualified third, and the Monster Energy Yamaha rider noted he is thus in the same position that Miller was two years ago.

However, he too will have the rear of his M1 squatted for the start.

“Because it’s making us win so much time, I think we need to take the risk to use it.

“Many laps this weekend, I’ve been trying without the device. Of course, there is a small advantage [to using it], but I think in Austria is the track where you can feel much more the advantage of the holeshot device.

“So, I don’t think it’s a massive problem for them [Suzuki], I don’t think they are struggling for that, so yes, I think everyone is using it in the best way they can.”

Miller, meanwhile, qualified seventh on the other factory-entered Ducati, with race start scheduled for 22:00 AEST tonight.