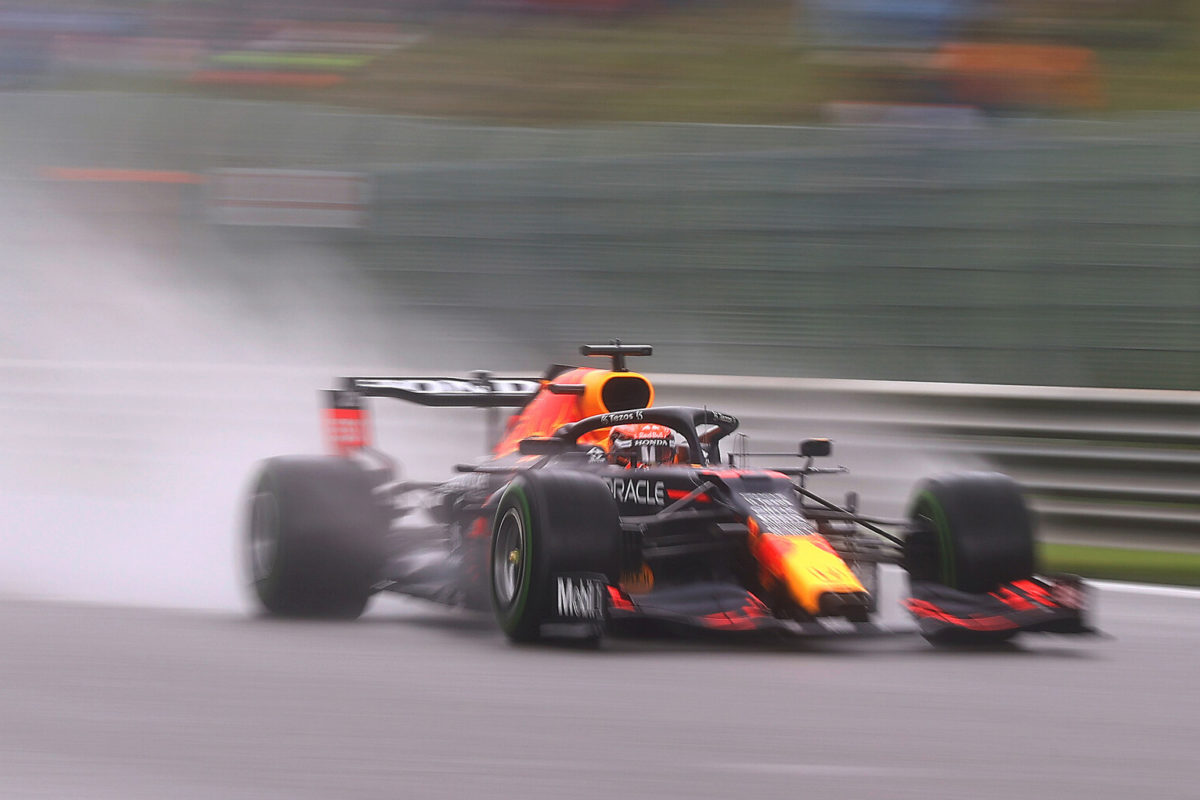 The Dutchman headed the field by almost a second from team-mate Sergio Perez, and was so comfortable he climbed from the car well before the 60-minute session ended.

Lewis Hamilton was next best, but a second down on his title rival, in an hour of running that saw him off the road on multiple occasions.

Nikita Mazepin and Mick Schumacher had a set of the extreme wet tyres fitted, despite there being no standing water, the others on the inters.

It was a case of tyre preservation with a view to qualifying, teams having a limited bank of grooved rubber for the balance of the weekend.

Conditions were slippery, Russell skating long at the Bus Stop Chicane as he approached it for the first time.

Carlos Sainz also had a moment, his at Les Combes, a corner which also caught out Sebastian Vettel and Valtteri Bottas soon after.

Moments later, Lewis Hamilton left the road at the same place as his team-mate, a braking zone that would prove something of a hot spot for action throughout the session.

The difficult conditions were reflected on the timesheets, Pierre Gasly fastest with a 2:01.385s after 10 minutes.

That time fell as a partially dry line began to form in parts of the circuit, Hamilton lowering the marker to 1:57.996s.

As conditions continued to gradually improve so too did the lap times, Max Verstappen setting a 1:56.924s to go fastest.

Kimi Raikkonen’s session was interrupted when he suffered brake failure.

The Alfa Romeo driver able to return to the garage where it spent the balance of the hour.

With conditions stabilising and little more to be gained, Verstappen climbed from his car with more than 10 minutes remaining.

The track remained slippery, with Hamilton and Fernando Alonso both skating off at Les Combes but able to carry on.

Gasly had a pirouette at Paul Frere to trigger a brief double-yellow period, dropping the rear of the car as he accelerated on the painted exit kerb.

He kept the AlphaTauri out of the guardrail and was able to continue.

Charles Leclerc’s session came to an early end after he reported something loose in the cockpit of his Ferrari.

The Monegasque driver was in a new chassis versus that he’d driven on Friday after finding the wall at Les Combes in Free Practice 2.

In the final moments of the session, Lando Norris headed out on a set of soft compound tyres.

It proved to be far too wet, the Brit nearly losing control out of the pit lane and he immediately returning to the garage – 1:56 proving to be some way from the crossover point to dry weather tyres.

The session therefore ended with Verstappen fastest from Sergio Perez, Hamilton, and Norris.

Raikkonen completed just three laps as he found himself at the foot of the timings, while Daniel Ricciardo was 13th, the first driver not to dip below the two-minute barrier.

Qualifying follows at 23:00 AEST this evening.