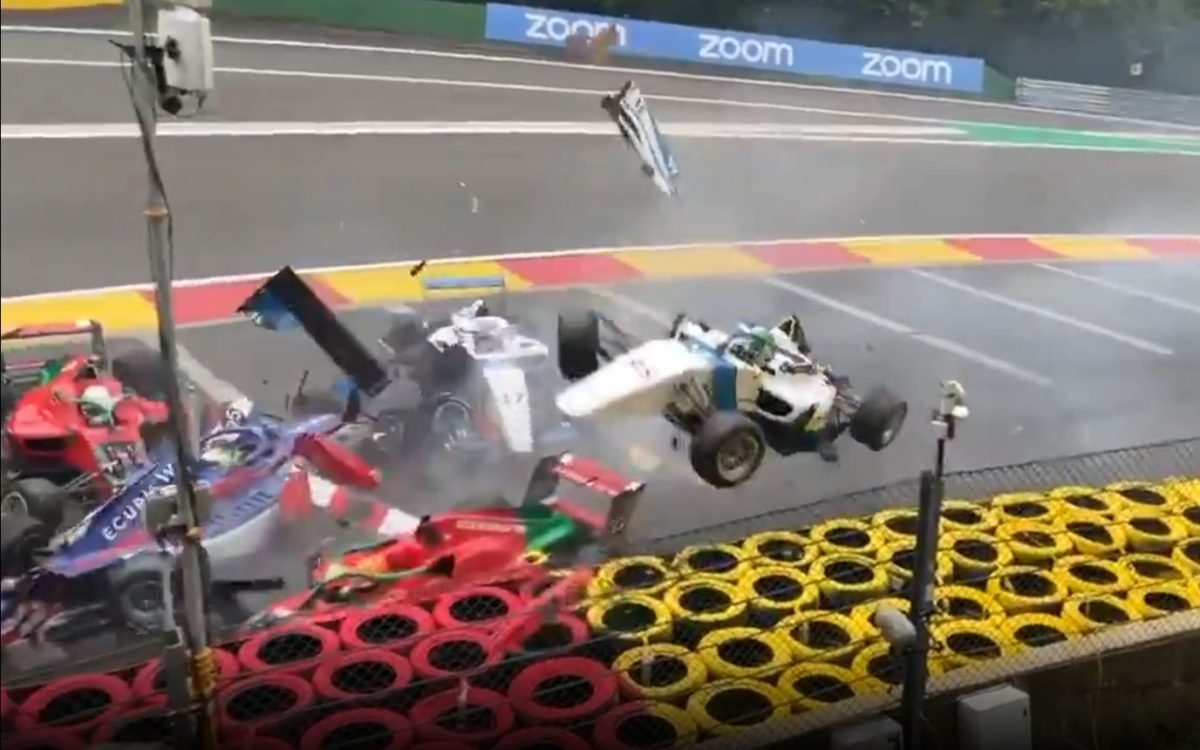 Eau Rouge and Raidillon have come under increased scrutiny at this weekend’s Formula 1 Belgian Grand Prix.

A bump in the compression of the Eau Rouge left-hander left Lewis Hamilton to suggest the corner has been “ruined”.

Meanwhile, while a heavy W Series crash at Raidillon prompted renewed calls for increased safety at the high-speed corner.

“They’ve kind of ruined it a little bit with whatever it is.

“I don’t know if they have got a new patch [of tarmac] there, but there’s a massive bump right at the compression point which we’ve never had there before.

“You feel it on the backside, but I’m sure they will fix it.

“I think has something to do with the mudslides, the rain, or something like that.”

A video posted on social media from a fan at Raidillon showed seven cars lose control, with at least six of them making contact with either the tyre barrier or one another.

The W Series issued a statement following the session confirming all drivers involved in the incident were undergoing medical assessments and that two – Ayla Agren and Beitske Visser – had been transferred to hospital for further checks.

It’s the latest in a number of significant crashes at Raidillon in recent years, most notably the death of Formula 2 driver Anthoine Hubert in 2019.

Revisions to the circuit are set to be made as part of a broader upgrade next year, but that has not stopped a number of the sport’s next generation calling for change.

“Don’t want to go too deeply into it but when every race weekend we see a huge incident involved in the same corner, we can’t just ignore it and move on.”

The fast left-hander was the scene of a similar multi-car crash during the 24 Hours of Spa-Francorchamps earlier this month.

That saw Ferrari Driver Academy member Callum Ilott, who is in the frame for a drive with Alfa Romeo in Formula 1 next season, voice similar concerns to those of Zhou.

“If I’m wrong for chasing for better safety after seeing 4 [sic] of my friends involved in massive accidents then I may as well not be human,” he wrote at the time.

“I’ve come back to spa after 2019 and I will come back again after this. But that doesnt mean if something isn’t good enough it shouldn’t be fixed.”

“Seeing a bit too much finger pointing and ‘I am/was right’ on my feed atm, let’s just be bloody thankful that all the girls seem to have gotten away under their own steam,” he wrote of the W Series crash.

“I’m pretty sure everyone has gotten the picture of what needs changing.”

Ironically, heading into the weekend a number of F1 drivers downplayed the Eau Rouge/Raidillon section, suggesting instead that Pouhon was the greater challenge.

“It’s not much of a corner anymore,” Aston Martin’s Lance Stroll said of the uphill Raidillon section.

“Looks impressive, but it’s it’s not actually much of a corner anymore.

“Sometimes the first lap of the race and stuff it can be an exciting corner, when you’re following someone it’s not always easy flat.

“On a qualifying lap, it’s not really much of a corner anymore.”

Raikkonen shared Stroll’s view, adding, “Eau Rouge used to be quite tricky in the early days. These days it’s more like a straight for us.”