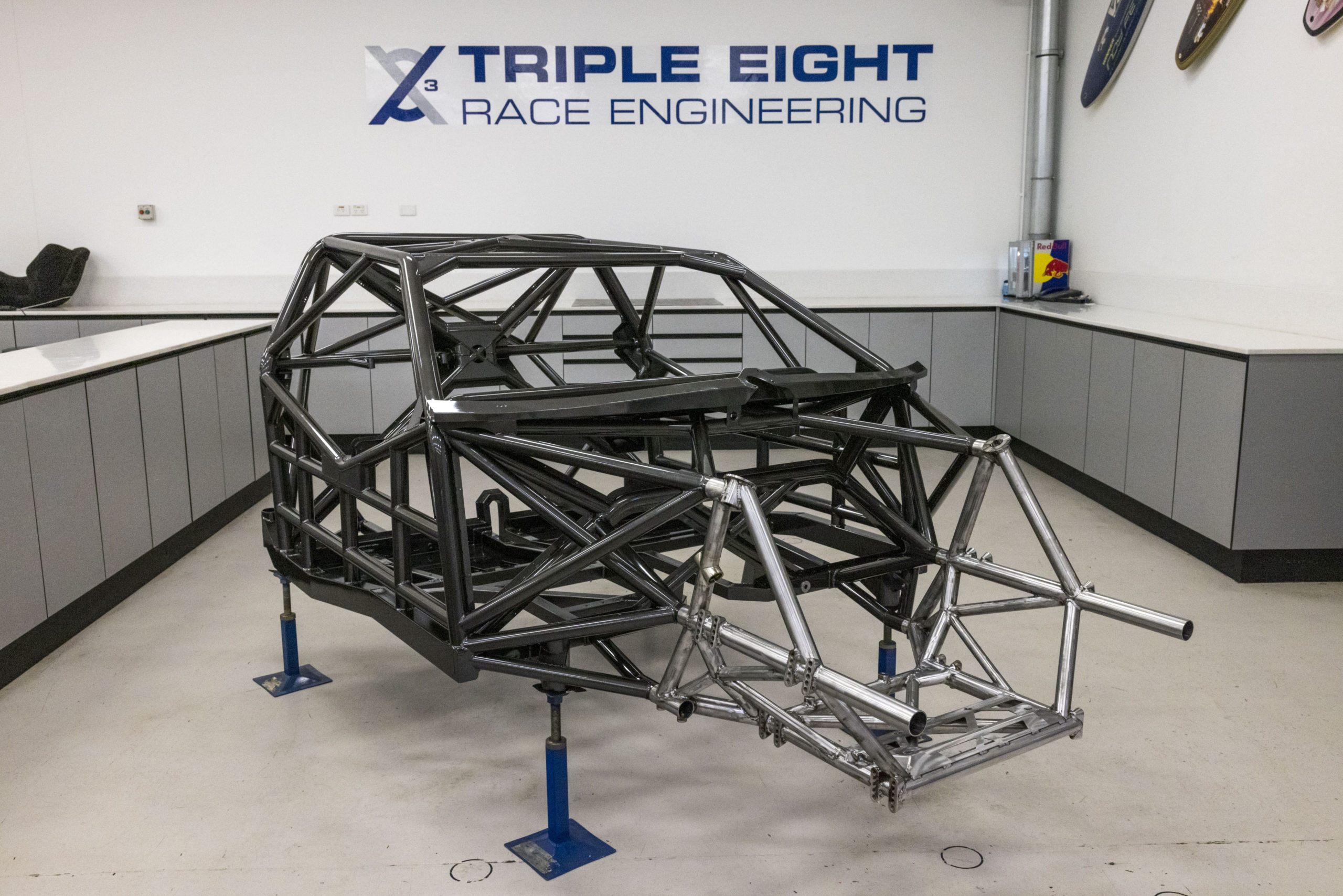 Supercars drivers Shane van Gisbergen and Will Davison have given their initial impressions after sitting in a Gen3 prototype chassis for the first time.

Chevrolet Camaro homologation team Triple Eight Race Engineering and PACE Innovations have each built a chassis which will be the bed for the prototype Supercars.

The PACE Innovations frame will form the basis of the Ford Mustang, which is being homologated by Dick Johnson Racing.

Little has been glimpsed into the physical make-up of the new-for-2022 touring cars other than the respective chassis builds, a steering wheel prototype, and the 5.7-litre GM engine prototype.

Behind closed doors, the next-generation cars are beginning to take shape as more parts arrive from overseas.

In recent days Tickford Racing CEO Tim Edwards revealed the Camaro would roll out for testing with paddle shift while the Mustang would test with the conventional lever shifter as is used presently in the Gen2 cars. Supercars has said since April that it would test both systems, although the introduction of paddle shift is believed to be almost a formality.

Among the changes from Gen2 to Gen3 is the removal of anti-roll bar adjusters in the cockpit.

Speaking with the official Supercars website, championship leader van Gisbergen noted the absence of the bars and lever shifter, which made for a “really weird” feeling.

“I sat in it, end of last week, which was pretty cool,” said van Gisbergen.

“It had the bonnet on it and the seating position and a few different things, and it’s cool. It looks tough.

“The seating position is quite different. There’s some cool changes. I’m looking forward to driving it, whenever that is.

“We’ve been playing in the TA2 car with the new, or similar style engine. It’s all pretty cool.”

Asked what was noticeably different, van Gisbergen replied, “How the pedal box adjusts, how the steering adjusts, obviously having nothing on the left side of the car is really weird.

“No roll bars, no gear lever and all that kind of stuff. It just feels very different, it’s kind of GT-ish.”

Davison said there has been a lot of progress with a collaborative approach between the two homologation teams and Supercars.

Like van Gisbergen, Davison recently had his first chance to sit in the new car and had similar observations.

“There’s lots of input going on and the car is really starting to take shape,” said Davison.

“Much like Shane, I sat in our car last week. Obviously we’re playing around with seating positions and getting an initial feel for what it’s all about.

“It’s all feedback that’s going back into the pool as to how everything is going to work moving forwards.”

Davison noted the lower roofline, which is intended to allow for a greater spread of silhouettes.

“Obviously the roof is very low and the way you sit in the car is quite different,” Davison explained.

“We were able to get the screen on and steering column in and pedal box. It’s exciting seeing it all come to life.

“It’s certainly going to be a very different beast to what we’ve known and felt and touched for many years. Certainly coming along fairly well.

“There’s a safety element, obviously making sure that drivers are going to be able to be positioned safely from their head respective to the roof, particularly taller drivers, just to make sure there’s plenty of clearance there and making sure your eye line is in a good position.

“I think everything is pretty good on that front. It’s just getting an idea as to where you want the seat.”

Although auto blip and paddle shift hasn’t been formally confirmed by Supercars, some drivers believe left foot braking could become the norm when the cars begin racing.

“We touched on the pedal box position being quite different relative [to now],” said Davison.

“Depending on whether we’ve got a lever or paddle shift will probably dictate the importance of that element as well.

“That’s where it changes the ergonomic requirement. It’ll be much more along the lines of a GT-style seating position I would say.”

Supercars is targeting a late October testing rollout of its two Gen3 prototypes.