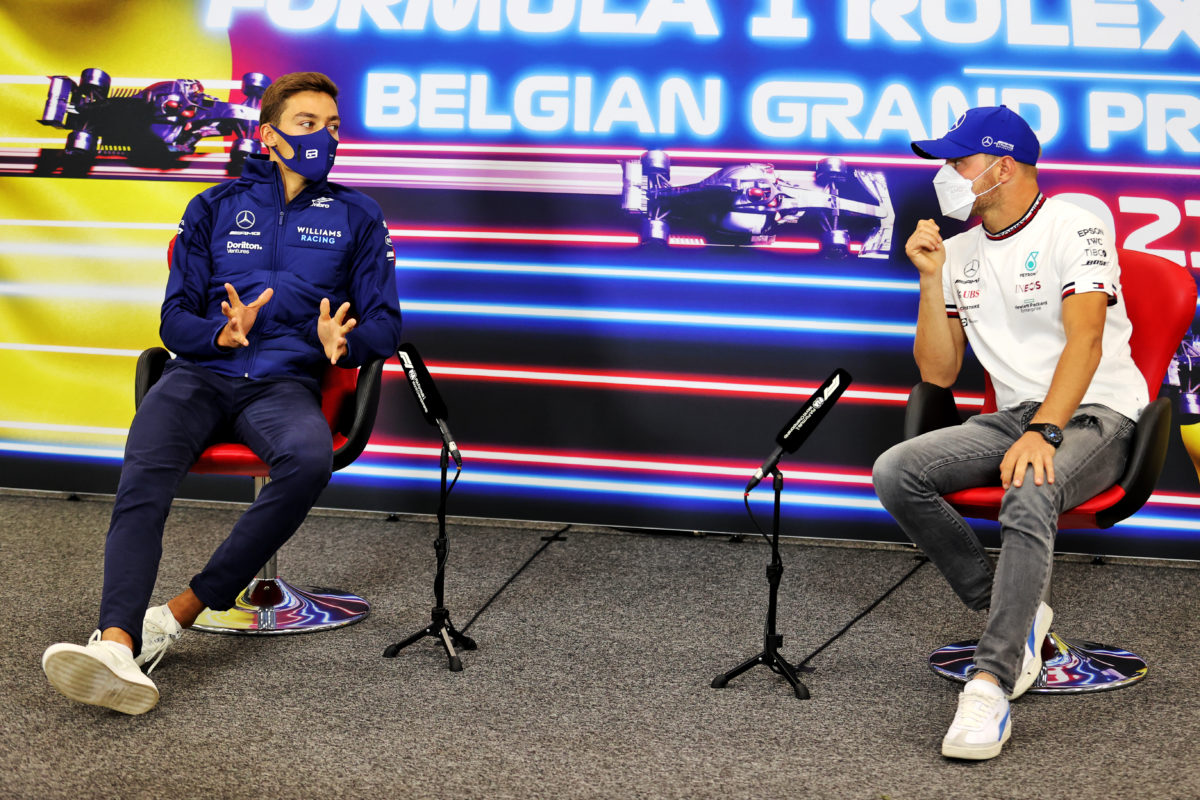 Valtteri Bottas and George Russell remained tight-lipped as speculation over which of the two will drive for the Mercedes Formula 1 team next season continues.

Prior to F1’s summer break, Russell had intimated that he would know his future before the sport resumed at the Belgian Grand Prix this weekend.

Appropriately, and perhaps deliberately, the pair fronted the media on Thursday in Spa-Francorchamps together, though neither was giving the game away.

Pressed on whether that was a surprise, given his desire to have a resolution prior to this weekend, the Finn remained coy.

Russell was towing the same “no news to share” line though was slightly more expansive.

“So obviously in discussions over [the] summer break,” he confirmed, “but there’s nothing to announce one way or another this weekend, and probably not next weekend either, to be honest.

“Everything is, you know… do things right rather than quickly, let’s say.”

Though pushed on the matter, neither driver was willing to share more aside from the fact they remain on speaking terms.

“Obviously we are competitors and it’s rare that two Formula 1 drivers, or two competitors, are best friends,” Russell reasoned.

“Valtteri and I are both grown-ups, we’ve moved on from anything from the past and there’s no issues from, well, from my side.”

The Mercedes seat is one of the most alluring in Formula 1 owing to the Anglo-German marque’s success in recent seasons.

It has utterly dominated the turbo-hybrid era, with Hamilton having single-handedly won more than half of the 149 races run since it was introduced in 2014.

The decision between Bottas and Russell ultimately appears to come down to one of philosophy for the team, and the dynamic between its drivers.

In Bottas it has a loyal and capable second driver to Hamilton, the clear and established team leader.

However, with Russell they have a young steed with the potential to pick up where the seven-time champion leaves off when he finally calls time on his career.

That’s not set to be until the end of 2023 after a new two-year deal was announced in July.

Team boss Toto Wolff’s decision therefore comes down to whether he is comfortable with the status quo for another year or whether it’s time to introduce some fresh blood.

Signing Bottas is the safe, conservative approach whereas bringing in Russell raises the possibility of internal conflict but potentially lofty returns in the medium term.

Russell finished eighth in the Hungarian Grand Prix to score his first points for Williams.

Bottas meanwhile heads into this weekend’s race with a five-place grid penalty for his part in the opening corner shemozzle at the Hungaroring.

Free Practice 1 for the Belgian Grand Prix gets underway at 19:30 AEST this evening.