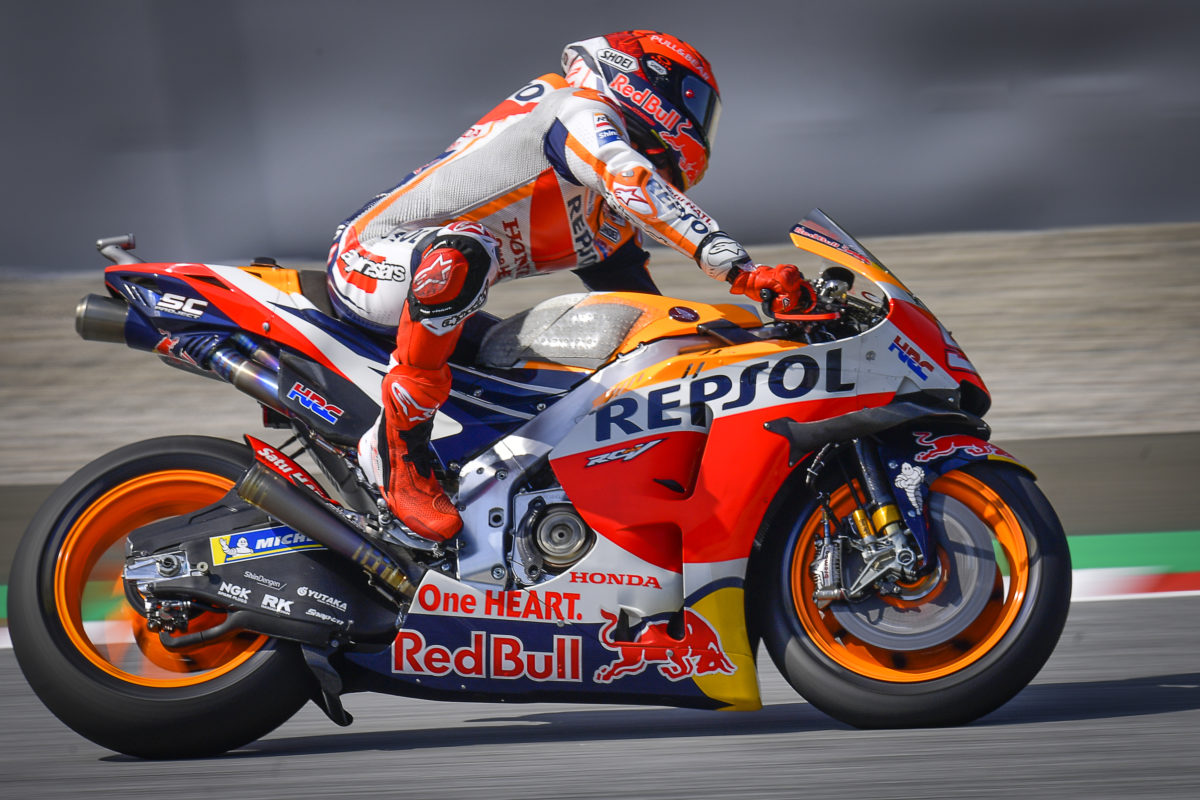 Marc Marquez admits that he is “not enjoying” his long recovery from breaking an arm in last year’s Spanish MotoGP round, more than a year ago now.

Marquez crashed violently on July 19, 2020 at Jerez and, after an aborted comeback attempt just a week later, ultimately had three operations to correct his broken right humerus.

However, he continues to feel the physical effects of the spill, which has now manifested itself in a lack of strength in his right shoulder.

Repsol Honda team manager Alberto Puig said after the most recent round, the Austrian Grand Prix, that the six-time champion is “returning to his real potential”.

Marquez, however, admits he is still “suffering”, but is determined to push through.

“In the hard moments, you need to show your potential,” said #93 in an interview with Britain’s The Guardian newspaper ahead of this weekend’s British Grand Prix.

“In the good moments everybody is happy and smiling and quick, in the hard moments you need to fight.

“The easiest way would be to stop and come back when I feel ready in one or two years. But that’s not my style.

“My style is to try to suffer to improve and come back. And to enjoy it on the bike.

“Now I am not enjoying it, now I am suffering.”

Marquez has already admitted that he thought about suspending his comeback.

Speaking ahead of Round 6, the Italian Grand Prix, the 28-year-old revealed that he spoke to doctors about the possibility but was advised that riding a MotoGP bike would be the best thing for him.

Since then, he has won the German Grand Prix, where the Sachsenring’s anti-clockwise layout lessened the impact of his physical issues, and is now Honda’s leading rider in the championship despite missing the first two rounds of the season.

The performance led Puig, himself a former rider, to heap praise on Marquez for how he has ridden with only “an arm-and-a-half”.

“I think, for a while, some people forgot about who is Marc Marquez,” he said in a video published on MotoGP’s official website during the recent summer break.

“I’m not a guy that reads a lot – these newspapers and news, I’m not so much interested – [but] from what I hear from our press manager, there have been strange comments in the past regarding his comeback, his possibilities…

“I don’t know if people really understand the level of rider that he is.

“Marc’s comeback is being more difficult than expected, due to the injury and what happened, and what he’s doing currently with his situation, it’s really amazing.

“Because he’s riding, I’m not saying with one arm, but let’s say with one-and-a-half arms.

“He’s clearly not a hundred percent fit, so I think only one guy can do this, and this is him.”

Marquez is now 11th in the championship ahead of Round 12 at Silverstone, where practice kicks off on Friday night (AEST).