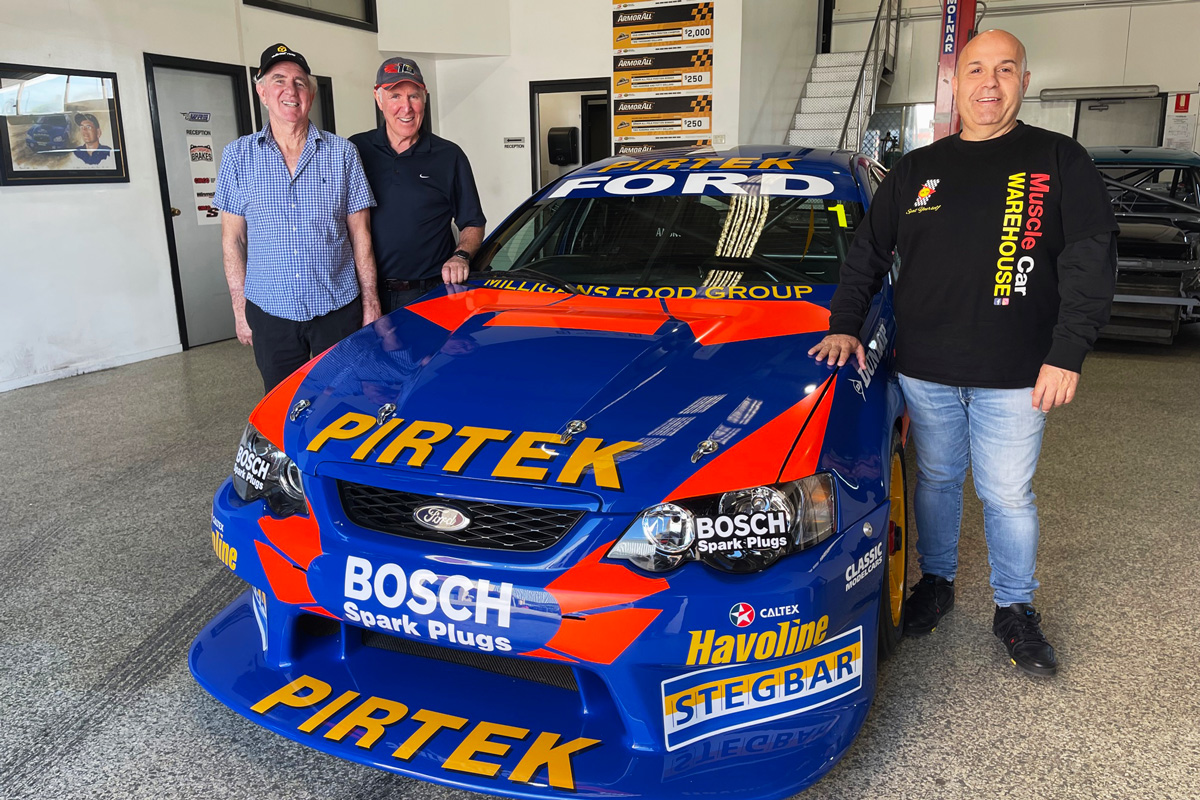 The Stone Brothers Racing Pirtek Falcon which Marcos Ambrose drove to the 2003 and 2004 Supercars Championships has been sold for an undisclosed amount to a Sydney buyer.

Auto industry identity Perry Bitsikas, who co-owns the Muscle Car Warehouse in Sydney, took delivery of the car for one of his clients today and the car will be on display at a new museum being constructed around his current business.

While a price for the car was kept confidential, the Pirtek Falcon is regarded as one of the “crown jewels” of modern Australian touring car racing.

Other cars from the Supercars era of the sport have reportedly sold for more than $A1 million.

“There are not too many cars more special than the BA Pirtek Falcon when it comes to Australian touring car racing,” said Bitsikas.

“SBR and Marcos were just so consistent and the results were incredible through that period.

“Ross and Jimmy (Stone) have done a magnificent job restoring the car and it will certainly be one of the major drawcards for the new museum at Muscle Car Warehouse.”

Ross and Jimmy Stone restored the car over almost four years and finally took the covers off their restored “champion” in July last year.

The car has been resprayed in Pirtek blue and carries a race-prepared SBR engine which was part of the original pool of power plants that were in the car during the 2003 and 2004 championship seasons.

“It’s a pretty special car, but Jimmy and I think it is time for the baton to be handed over, if you like,” said Ross.

“When we were approached about selling the car and told what the plans for it would be, it all made sense and stacked up.

“The transition has been very smooth and straightforward with Perry and I am sure it will be a good long-term investment and be a great drawcard for the new museum. “It took Jimmy and myself about four years off and on to restore it to as close to 100 percent as possible. We researched every minor detail to ensure it could not be any more authentic.

“We are happy with the end result and it’s time for a new custodian to take charge.”

The car has recently been on display at the new Gold Coast Motor Museum at Upper Coomera, alongside Ambrose’s first winning NASCAR from 2008.

Ironically, the Stones are currently putting the finishing touches on the Caltex Falcon which Russell Ingall drove to the 2005 Supercars title.

SBR rolled the Pirtek Falcon out for a media day in early 2003 and Ambrose won the first race of the championship at the Adelaide 500.

It was the first of nine wins and 13 podiums for the season, which also included seven poles.

The following year Ambrose continued his impressive campaign with 20 podium finishes from 26 races, including 11 race wins.

After a controversial season in 2005, Ambrose finished third in the title chase to his SBR team-mate Ingall.

In 2006 James Courtney replaced Ambrose at Stone Brothers Racing but he had two major accidents in the opening round of the season in Adelaide.

The Ambrose car was used for the support events at the Australian Grand Prix and for championship events at Pukekohe in New Zealand, Wanneroo and Winton while Courtney’s car was rebuilt.

The car was then used by Jonathon Webb for three Super2 Series (né Fujitsu V8 Supercars Series) races in 2007 before moving to Matt Stone Racing where it completed another seven races before being put into storage.